‘You matter’: The teacher behind the Don’t Give Up Movement at West 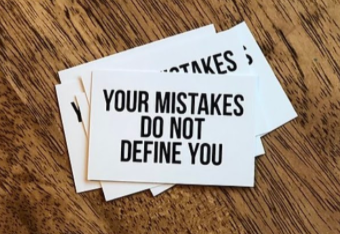 Courtesy of the Don't Give Up Movement

The cards created by the Don’t Give Up movement feature a variety of positive messages and have spread on a global scale. History teacher Mel Trotier felt that these messages would help to alleviate student stress and change their mindset. “I like the card that says 'your mistakes don't define you'. I think it's important because, in school, you're learning, which means you're not perfect yet,” Trotier said. “I feel like students need to be willing to let mistakes happen and not let that mistake ruin their day because it's one thing. To me, it is the strongest message, especially for students.”

Having experienced a nationwide spike of anxiety and stress in students in recent years, history teacher Mel Trotier felt as though action needed to be taken. After learning of the Don’t Give Up Movement, Trotier chose to spread the movement to his own classroom and eventually throughout the school.

“I felt like it was something little that I could do. It made me feel good to know that kids appreciated the fact that we were talking about mental health, when usually people don’t want to talk about it. It was great to know that it made a difference in some of my student’s lives,” Trotier said.

Beginning on the first day of school, Trotier gave cards to his students with phrases such as “DON’T GIVE UP” and “YOU MATTER,” which are produced by the Don’t Give Up organization. Soon, Trotier chose to spread the cards throughout the school.

“[The cards are] goofy, but I think they help. One of them says ‘IT’S OKAY TO MAKE MISTAKES’, and it lets kids know that grades don’t define you and you’re not a number,” Trotier said.  “My hope is that these cards are reminders that it’s okay to struggle with stuff.”

Trotier aims to alleviate some of the stress that students may feel as a result of school, which he feels has been on the rise.

“I have seen, over the years, more and more anxiety for students to get scholarships or get into college or get the best AP scores or take AP classes. Anxiety levels have been rising nationwide, and I’ve seen that from my own son and from students. It’s been an overwhelming trend over the last several years,” Trotier said. “The whole idea of perfection and competition among students adds to their anxieties, and it doesn’t let them make mistakes. That isn’t what we’re supposed to be doing–students are not supposed to be experts. When you’re learning how to do something, you’re supposed to screw stuff up.”

Junior Lily Schell has taken a special interest in spreading the card’s messages after receiving the signs from Trotier, even giving the positive affirmations to strangers.

“The cards make me think that people actually are trying to be there for each other and support each other, and they give me hope. They give other students a sense of ‘we’re in this together’ and ‘we can do it’,” Schell said. “I think it’s nice for people to see little memos like that. They make me smile, so I hope they make other people smile.”

Having also connected with the messages on the cards, Special Education teacher Darla Maynard and her students voted to add the cards to the stress boxes that they have created and placed around the school. These boxes help students to reduce their stress, and Maynard felt the cards matched the theme of the boxes.

“The cards have mantras that can help give students a truth they can focus on when their thoughts are taking them down roads that are negative. We hope that the words on the cards can remind students of what they can overcome to be their best selves,” Maynard said. “The cards are good reminders of what we need to remember, especially in times when we feel things are not going the way we planned.”

Though the program has expanded, the Don’t Give Up Movement began as a way to combat suicide, which Trotier feels is a very pressing issue, having noticed an increase in student suicides.

“[Student suicide] is an inevitable result of how much stress is happening, and it’s devastating for everybody. I think that it’s a big, big problem,” Trotier said.

Trotier hopes that the cards can play a role in changing a culture of perfection for students and plans on distributing more cards to his classes in the future.

“There’s like a call to perfection, like everybody’s got to be the best and have the best grades. I think the cards can help to get back to the idea that done is better than perfect. Your best on Monday is not necessarily the same as your best on Tuesday, and that’s okay,” Trotier said. “My hope is the cards make people pause and think, ‘it’s okay; I don’t have to be perfect every day of the week.’”

If you have seen one of these signs or messages, please share how it impacted you in the comments below.