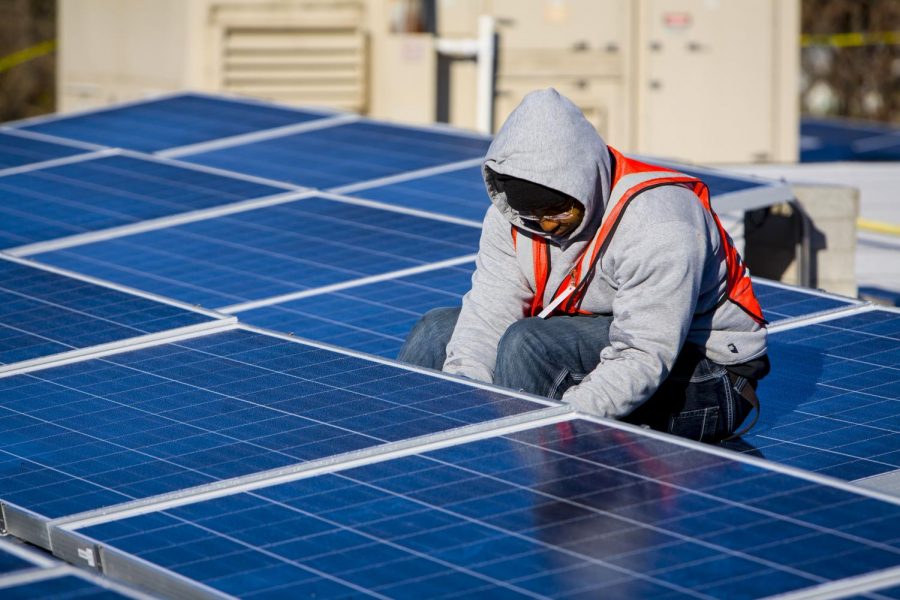 A Solar Installer from Bright Energy Solar finishes installing the first array of solar panels on a Parkway roof. These specific panels were put on six years ago, but they were just added to last summer. “The most recent 75 kW installations that were put up at West High, South High, Green Trails, and Wren Hollow were completed by Straight Up Solar,” Lueders said.

The National Public Radio reported earlier this month that the Australian bushfires were fully extinguished. Fueled by prolonged drought and enduring for over 240 days, the bushfires burned through more than 27 million acres of land, claimed the lives of at least 30 people and destroyed about 3,000 homes.

Parkway Director of Sustainability and Purchasing Erik Leuders speculates this all comes back to climate change.

“I mean the climate crisis is real. It is very apparent. The science is there. Our time is running out. And so we need to move at breakneck speeds to make a difference and start making a positive impact,” Lueders said.

Lueders believes there is more everyone can do on a daily and personal basis that can change the world and have positive effects on the environment.

“There are a lot of things we can do, and it’s imperative that all of us take small steps, hopefully with an accelerating pace, to make a difference,” Lueders said, “There are a million and one things that we can all do, and it can seem overwhelming, it can absolutely seem overwhelming, but we all need to start somewhere. And if it’s even just making a pledge that I’m going to try to find one new thing to do every two weeks, then let’s do that,”

With the mindset that there’s always something to be done, Parkway has already begun taking steps to be more environmentally friendly.

“We’re saving over a million dollars a year in spending, but the associated carbon emissions are what really excites me. I’ve seen how much fewer CO2 emissions are going into the atmosphere because of all this work that we’re doing,” Lueders said.

The district has been working on a number of projects starting with reducing cafeteria waste and implementing LED light bulbs.

“We’re saving about 500 tons of food waste that’s being diverted from a landfill to a compost facility,” Lueders said.“Plus we’re rolling out with LED conversion, so Parkway West High is one of many schools that is about complete with converting all lighting from fluorescent over to LED,” Lueders said.

“We’re starting to use vacancy sensors in buildings, so automatically turning off lights when no one’s in the space,” Lueders said. “Currently, we are working on getting a better handle on maintaining native landscaping. We’re trying to convert areas from turf, which is a very shallow-rooted grass that doesn’t provide any biodiversity or ecological benefits to the space they’re in, to native plants. Parkway is fortunate because we have a lot of green space that we could potentially convert over to Missouri native plants, wildflowers, and pollinating plants that can support biodiversity such as monarch butterflies and other species.”

“Over the summer we installed an expansion to the solar arrays at four different schools, one of which [was] Parkway West High, so it was a 25-kilowatt array and now is a 100-kilowatt array, meaning the district is now generating over 1.1 megawatts of solar capacity. At Parkway South High School, we installed a geothermal well field, and that was a really big project. So now we’re essentially using the Earth’s constant temperature as a mechanism to provide heating and cooling to the interior spaces, which is something that Parkway’s never done, and many institutions within the St. Louis area just haven’t done,” Lueders said.

West has an Environmental Club, and although they are currently on hiatus, they have plans to continue to support the environment. Thirst Project, led by junior Salma Ahmed, also works to promote environmental and humanitarian concerns.

“Our main goal is just raising money to build a well for people that don’t have fresh and clean water. Our goal is [to raise] awareness about the water crisis in our school meet every other Thursday in Mrs. Van Matre-Woodward’s room at 7:30 in the morning, and we talk about fundraising ideas that we’re planning to do around the school,” Ahmed said.

Despite current efforts, Lueders says more remains to be done.

“There’s always an opportunity to do more, and I feel like the work is never done until we’re net-zero energy, net-zero water, and zero landfills, which are some ambitious goals, but I think we’re on the right path and we just need to keep our resolve and keep the momentum going,” Lueders said.