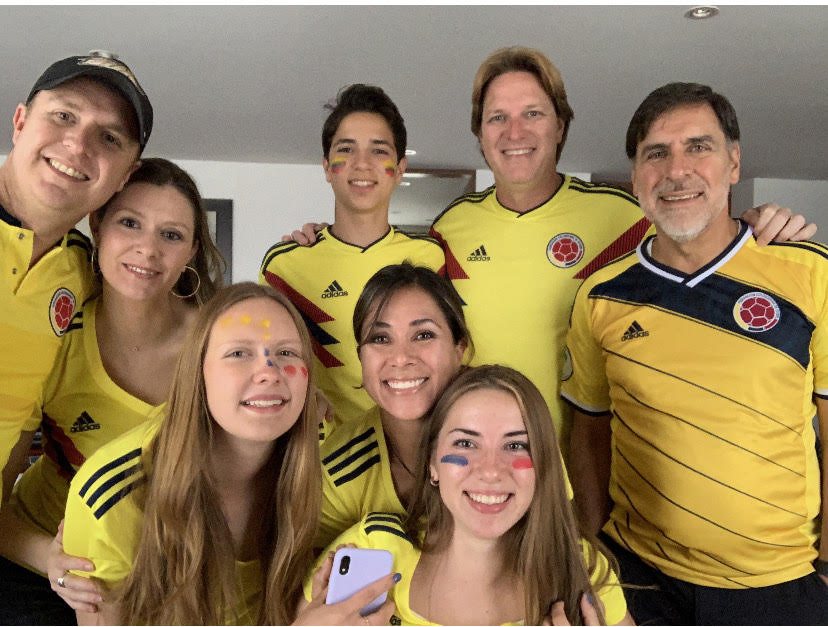 The halls of Parkway West Middle School seemed daunting, and expansive to junior Ale Calvo when her father’s job was transferred her family from Buenos Aires, Argentina to St. Louis, Missouri in the sixth grade.

“We moved here because of my dad’s job. He works in Monsanto (now Bayer) and the headquarters were here in St. Louis. Although my life in Colombia was amazing, the opportunities I have in the United States are completely different. Here, I have a wider range of options when it comes to my future. The U.S. obviously has some of the greatest universities in the world and so many majors and careers that fit my interests. In Colombia it’s more limited,” Calvo said.

Calvo was born in Bogota, Columbia then moved to Mexico and Argentina, before transitioning to life in the United States. After her move in the sixth grade, Calvo turned to soccer to find new friendships.

“Soccer had always helped me make bonds that I would not have otherwise. When I was new to school and to the United States I joined Irene Yannakakis’s dad’s soccer team. This helped me build a connection with Irene and to this day she is one of my closest friends. Without soccer, I would not be where I am right now,” Calvo said.

Calvo’s advanced Spanish skills helped her serve as a student aide to Spanish teacher Eileen Rodriguez-Kiser last year to help other students learn Spanish, as a way to embrace her culture.

“I want others to know more about Colombia. Even my closest friends sometimes stereotype Colombia because of its bad history, but I want everyone to know that we have so much more to offer than that. Our music, food, beaches, fruits, landscapes are all beautiful. Colombia is very rich in culture, and an amazing place to visit on vacation,” Calvo said.

Calvo is learning French, in addition to her native Spanish, to help her interact with others abroad.

“Being trilingual has helped me so much, especially in traveling. One of my family’s greatest passions is visiting new countries. Last summer we traveled to Europe where we had to communicate with people from different nationalities. Since I know Spanish, English and French, I had three different options to try when I had to speak with someone foreign. Knowing Spanish and French also helps me understand similar languages like Portuguese and Italian, and I believe that this will be extremely helpful in my future,” Calvo said.

Freshman Nick Malchanav can still recall his second grade school year when his family moved from Minsk, Belarus to the United States.

“In Belarus, we lived in the city in a high-end apartment, so it was different because I got used to the one floor but really big area. Here, the next thing I know there’s a basement, second floor and a living room [that we used to have] all on one floor. There was just a different feel to it here with a more friendly and trusting environment,” Malchanav said.

Malchanav spent a large part of his school day in elementary school learning English and adjusting to the new language, as he knew very little English upon his arrival in the United States.

“It was hard for me being in school, keeping up with everything and also not knowing the language. There was an English class I took inside of school, English as a Second Language (ESL). I was there for three hours of the day and that’s where I learned English. My mom was learning outside of her job when she started to work and the same with my dad. My sister and I were taking English inside of school, while my parents were taking it outside of their job,” Malchanav said.

After learning English in elementary school, Malchanav enrolled in Spanish.

Malchanav hopes that being trilingual will help him with his future career plans.

“I hope to do something with business and entrepreneurship,” Malchanav said. “I think it will help me in the future because I know jobs want people that can communicate well, and if I know more than one language then it could help me a lot.”

Senior Nayeon Ryu moved to the United States from South Korea in preschool, yet Ryu still recognizes the challenges of language barriers with others in her everyday life.

“Having a mom that does speak limited English, I feel even more of a personal duty to be able to make everyone feel comfortable when communicating and interacting. Hopefully my knowledge of three languages can help even one person that I meet in the future,” Ryu said.

Ryu speaks Korean at home and chose to explore Spanish in high school.

“I chose Spanish because I thought it would be the most helpful to have basic knowledge on since it is used globally. There’s a high chance of interacting with people who may have limited English, like my parents, and are more comfortable with Spanish, and even basic high school Spanish may be enough to communicate,” Ryu said.

Ryu was excited about the opportunity to take Spanish so that she could better communicate with others.

“[I took a third language] to have even the slightest bit of knowledge that another language could make a significant difference for things like working at a restaurant and meeting a customer whose English isn’t their first language, or maybe knowing an additional language is what makes or breaks you getting a job over another candidate. We all have the opportunity to learn a new language in high school, so why not take it,” Ryu said.

Looking ahead, Ryu believes that these skills will help her when interacting with new people from diverse backgrounds.

“I think having knowledge in three different languages will really help me in the future when I am out of the high school bubble and will be meeting, interacting and communicating with a truly diverse and global world and people that may speak limited English,” Ryu said.