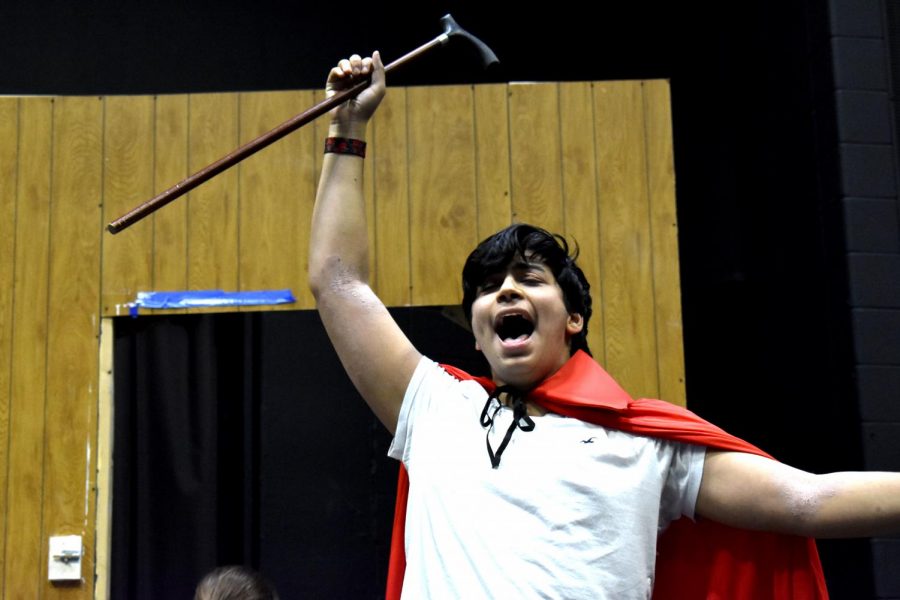 Singing his character titular song "I am Aldolpho," senior Zane Alshekhlee, plays the self-proclaimed 'ladies' man' Aldolpho in the musical "The Drowsy Chaperone." To play Aldolpho, Alsheklee had to speak with an exaggerated Spanish accent. "I think my favorite part would be my character song," Alshekhlee said. "It's so much fun to play and sing and dance," Alsheklee said.

After more than three months of preparation, the theatre department is debuting their production of “The Drowsy Chaperone,” a musical comedy paying tribute to–while also parodying–golden-age musicals.

The show centers around an unnamed “man in a chair,” played by senior Dennis McMorrow, providing commentary on his recording of a fictional musical also entitled “The Drowsy Chaperone.”

“I think [the musical is] really fun and goofy,” production manager and junior Clementine Arneson said. “There’s a lot of exaggerated characters. I think that it’s just a fun show to watch.”

As this is a parody of musicals, the show features stereotypical stock characters like the dimwitted ‘ladies’ man,’ Aldolpho, played by senior Zane Alshekhlee.

“[Aldolpho] is really fun to play–just the suaveness. He speaks in more of a Spanish accent and the cane tricks and the cape and everything that he’s got; the whole package is so much fun to play,” Alshekhlee said. “I made sure I had [the lines and blocking] down, and then I worked on the small nitpicky stuff. I have to relearn how to walk, how to talk, how to do everything.”

With many cast members having little to no dance experience, there were rehearsals focused on dancing, in addition to dance videos on Google Classroom for the cast to follow along with.

“The dance numbers are a lot, especially singing and dancing to all the [music],” ensemble member and freshman Madi Michajliczenko said. “It’s a lot at once, especially doing [the dances] in character shoes.”

Because the show has more than a hundred cues, there are two production managers. Senior Emma Whittenburg handles the lights and sound cues while junior Clementine Arneson manages the blocking, line calls and costume changes.

“I think it’s difficult to be on top of everybody’s blocking since there’s such a big cast,”  Arenson said. “You’ve got to be really organized, and it takes time and effort. [However,] at the end of the show, we get to see everyone’s hard work, both on stage and backstage come together to make a successful production.”

“There’s so much goofiness, there’s so much laughter, there’s some sadness in there too,” said Alshekhlee. “It’s got everything you can imagine. It’s got music, it’s got singing [and] it’s got dancing. It’s got a whole live orchestra. It’s just going to be an overall amazing time.”