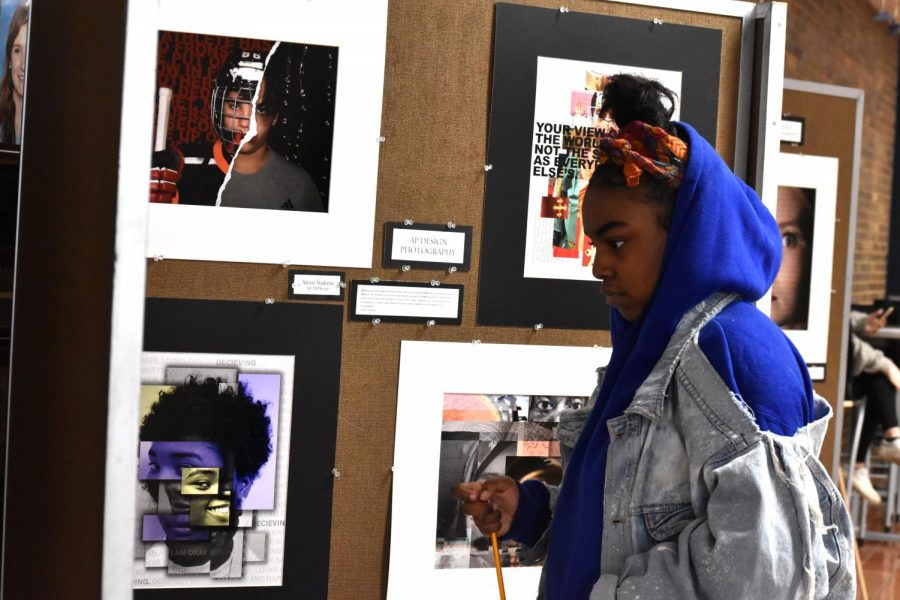 Searching for the piece of art that she will respond to, Creative Writing student and senior Allainah Crawford looks at works from the AP Design and Photography class. “This project is ‘free range’ compared to some of the other ones,” English teacher Dan Barnes said. “With express the music, we have word count, [but] with this one, I just want my students to be inspired by art.”

When Honors English 3 was offered as a class, Barnes taught ekphrastic response, having his students respond in writing to various pieces of art. The class then became Advanced Placement (AP) Language and Composition, and ekphrasis was lost in the curriculum.

Last year, Barnes decided to split his Creative Writing class into two sections, which allowed him to reintroduce ekphrastic response to his classroom. This split led Barnes to entertain the idea of a collaboration with the art department.

“Ekphrasis is all around us,” Barnes said. “We do it in our daily lives, and we hear it in music, [but] we don’t realize this. Part of [this project] is to bring up the concept that ekphrasis is a very common practice of art. When I created Creative Writing 2, I wanted to do collaborations and put writing out in public, so it just seemed natural that I would team up with the art department.”

This project, dreamed up by Barnes and carried out by the art department, is a collaboration between the two disciplines. Art students create works of art, and Creative Writing students respond with their own writing creations.

Art teacher Kat Briggs entered her job during the second year of the project. While the project was new for her curriculum, she saw it as a great opportunity for her students.

“I thought it was a really cool way for my AP [Studio Art] students to think about a broader audience than [just] themselves [or] AP College Board,” Briggs said. “It’s a cool way for them to think of their peers and everybody here at this school as their audience. From what I understand, the pieces that the Creative Writing students are writing are going to go up on the wall, and I think that’s really cool that we are going to get to share that with the whole school.”

Briggs was not the only person to respond positively to the project. Barnes was surprised by the excitement from the art department.

“[I didn’t expect] how well it was received last year. It really surprised me how excited some of the art students were to see their work,” Barnes said. “Normally when we create art as people we tend to be very quiet and reserved about it, and we think the worst of it. To see them excited, not only about their own work but also the fact that someone had responded to it, I thought was pretty cool.”

Before having his students begin the project, Barnes introduced ekphrastic response to his students by having them participate in a city-wide competition hosted by the St. Louis Symphony Orchestra called Express The Music. This competition asks students to respond to a piece of orchestral work with writing. While this competition is similar to the collaboration in that they are both responses to art, there are a few distinct differences.

“Express The Music has some tighter restrictions. Once we [went] through that round of ekphrasis, I introduced this [collaboration] project which has much looser restrictions,” Barnes said. “It is more about what the students can create without boundaries. The students get a choice in the art that they respond to as well as how they are going to respond. [They] can respond with poetry or prose. I don’t have a word minimum or maximum, so you get to choose length as well. There is a lot of choice that goes into this.”

“There’s a really big range,” Briggs said. “Some students are focused more personally, so we have some work where students are really honing in on their identity in terms of mental health and some of the issues that they face. Some of them talk about their identity in terms of their memories and experiences. So I think [the project is] a really cool way for others to get insight on the research that my students have been doing about themselves.”

Senior Alina Dunder has experienced the project from both sides, as she is in Creative Writing 2 as well as AP Studio Art.

“I’m already in AP Studio Art and know a lot of the work that was in the art show, so picking out a favorite piece that I have seen from beginning to end and writing about it is super fascinating to me,” Dunder said. “I chose Eva Phillips’ project because when I was thinking about what I wanted to write, I had this phrase ‘mad, mad’ repeating in my head for an idea. I really wanted to use it somewhere and incorporate it into a work of writing. I knew Eva’s sustained investigation was about finding beauty through embracing chaos, so I felt that my idea would work best for her artwork. And I just love her art; I see her doing it every time we have class.”

Barnes understands that when people first think of an ekphrastic response, they imagine the writing directly translating what the art is. This has not been the case regarding his students’ responses.

“I think what’s surprising is what the students take out of the pieces of art themselves. The ekphrastic response sometimes may not even feel like it matches the [art], but then when you really look at the descriptions of the two of them, you can see how well they sync up.”

Dunder has noticed this aspect of the project as well.

“Something I’ve learned from this project for sure is that you don’t have to interpret the same thing from what you see in the artwork as you are writing,” Dunder said. “For me, I really wanted to incorporate Eva’s sustained investigation into my poem because I know it so well from class, but I also found it fun putting my own sustained investigation in because that’s how I interpreted her piece when I saw it; I used my viewpoint through her artistic lens.”

While the projects hang outside of Barnes’ classroom for the public to see, he is seeking a way for the project to reach even further.

“[I would like to find] a way to make it bigger and better,” Barnes said. “I don’t quite know what that would look like yet but one thing I’ve been subtly hinting at to other creative writing teachers in the district is to have a district-wide creative writing show, just so we could showcase more of this work. In the same way that we would have an art fair, but have it be about the written word. It is a way for art to get celebrated, and for the art students to see their work reimagined.”