Alumnus Rasheen Aldridge reaches for the stars in Missouri politics 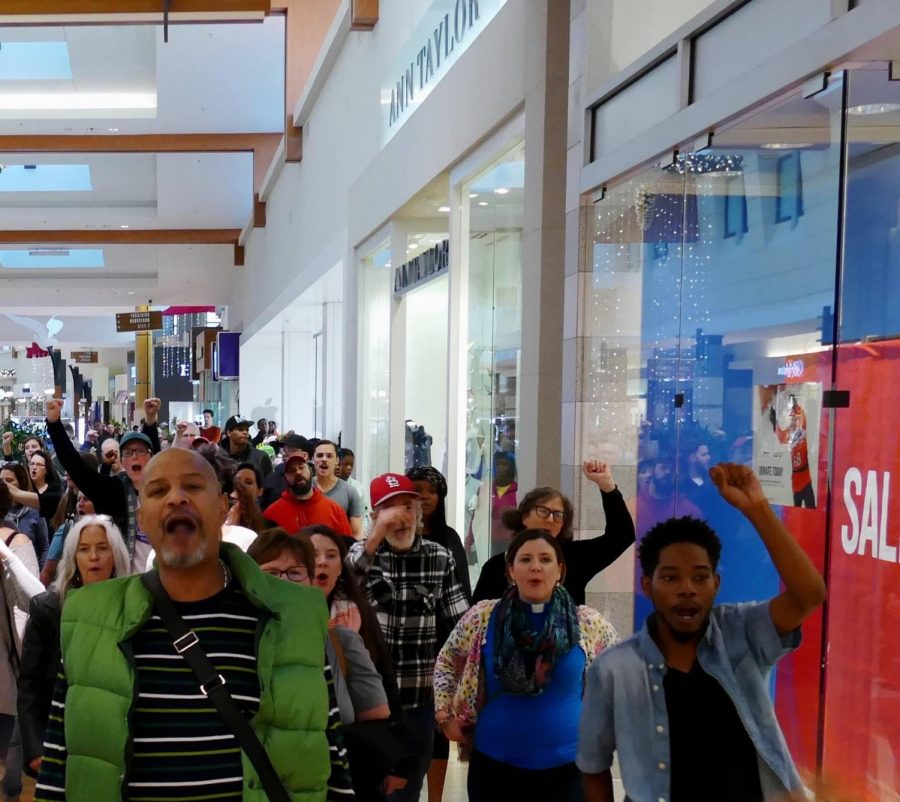 Alumnus Rasheen Aldridge protests at the West County Mall. Aldridge was elected to represent the 78th State Congressional District in the Missouri House of Representatives last year. “I was out there pretty much every day in Ferguson protesting, getting shot with tear gas,” Aldridge said.

2012 alumnus Rasheen Aldridge woke up at 5:30 a.m. to get ready for school when he was in high school. Being bused from the city required him to get up early in order to get to his bus on time.

“I was one of those kids who lingered, so my mom made sure I got up a little early because I would like to fall back to sleep,” Aldridge said.

At school, Aldridge liked to mess with the librarian and goof off in class. He often talked back to teachers.

“I never thought that I, who was just a class clown during my education and caused trouble here and there, would be in a position where [I was] the youngest Democratic state representative member in the House,” Aldridge said.

Aldridge has been politically active since he graduated high school, spending hours protesting in the streets of St. Louis City.

“I was out there pretty much every day in Ferguson protesting, getting shot with tear gas,” Aldridge said.

While actively protesting, Aldridge was invited to join Missouri Governor Jay Nixon’s Ferguson Commission in 2014. The commission was meant to come up with a report on different policy ideas that would make Ferguson a better city and also help other cities.

“Over time, I thought about [whether or not it would be a good idea for me to be on the commission] and actually applied to be on it. We came up with some really good recommendations locally that organizations can enact but also a lot of state policies that would change the way our city and also our state acts when it comes to certain communities,” Aldridge said.

Aldridge feels the commission took steps in the direction to improve the community, and he was able to contribute to the changes.

“One thing I recommended was raising the minimum wage to $15 an hour. [Another thing] in the report [was to] consolidate a lot of the municipalities that are in the county. The county has 90-something municipalities and that could be an issue making sure that we fully fund the transportation system and making sure that schools actually provide free lunches because we know that some kids can’t afford it,” Aldridge said. “A lot of kids come to school hungry and that’s not the best way that they can learn. There were a lot of progressive recommendations that we came up with.”

As one of the youngest members on the committee, Aldridge contributed to the diversity of the commission, including police officers, activists, Becky Hatter from Big Brothers Big Sisters and CEOs.

“Ideally, it was for us to come up with a report that we gave to the governor on different policy ideas that would make Ferguson a better city, but also other cities that are like Ferguson, so hopefully we’d be a better state,” Aldridge said.

Throughout his high school and political career, Aldridge was given support from his friends and family.

“Friends and family would write to me on Twitter or Facebook and say, ‘hey, great work’ or they’d say ‘Rasheen is trying to change the world’ while they were being crazy kids in college,” Aldridge said.

Aldridge felt pride in knowing his fellow classmates were proud of his work.

“Outside of staying in contact with friends and them being supportive, I’ve also been able to make relationships with their parents. Some of them even reach out and say ‘hey, I’ve seen you on TV, keep up the good work.’ It’s good to know that people that [I’ve known] from kindergarten all the way to 12th grade [and are] like a family [to me] and support me,” Aldridge said.

Friends and family donated to Aldridge’s campaign after seeing what he was doing for the community, and he continued to provide services to his community,

“I’m giving away dinners, like mashed potatoes, macaroni and cheese and other items so families can have it in the district and where I live,” Aldridge said.

Aldridge would like for students to learn from his successes.

“The world is really in our hands. Reach for the stars once you graduate, but in the moment, enjoy the time with your classmates,” Alridge said. “When senior years comes, we all rush so quickly to get out of school, then the last couple of months, it’s like, ‘aw, I’m going to miss my family, friends and teachers and all these individuals that we grew up with.’ If you’ve been friends with [your peers] from kindergarten all the way to 12th grade, you really become a family.”