Student to Student: Three juniors teach others what it is like to be Jewish 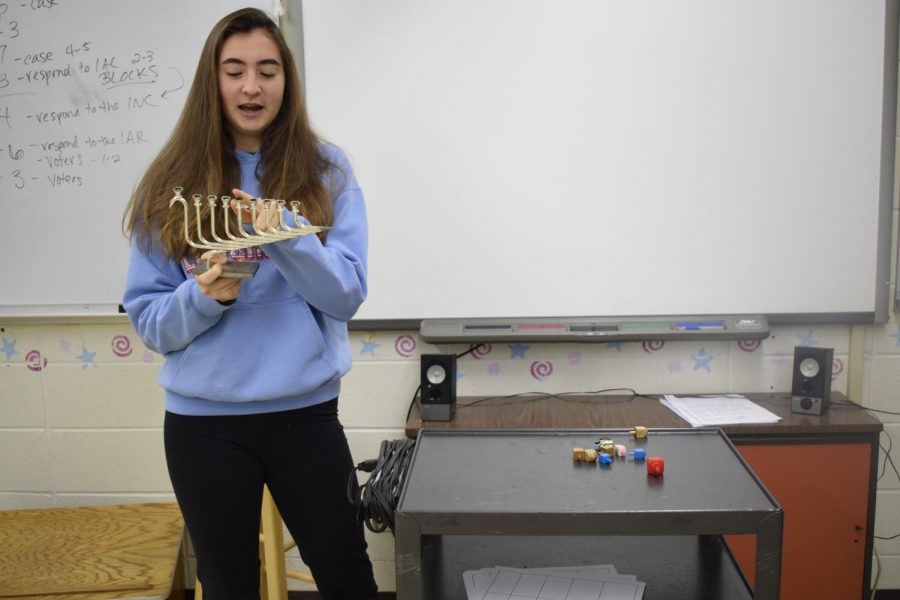 Pointing to the fourth branch on the Chanukiah, junior Ella Seigel describes Chanukah and other Jewish holidays to her peers. Seigel presented with props to share part of the Jewish culture with students at Westminster. “Their engagement showed that if you open up and show your differences, that can also provide unity in understanding,” Seigel said.

Placing Challah and a Shofar on a table in front of them, juniors Joe Rosenberg, Ella Seigel and Sara Marks stand in front of a classroom of strangers waiting for their presentation to begin. The three  participate in Student to Student, a program in which Jewish high schoolers around St. Louis present about their faith at a variety of high schools.

“I know that there are not a lot of Jews around the St. Louis area and around the United States in general, so I think it is important to be able to educate people about the Jewish religion and get rid of some of the common misconceptions,” Rosenberg said.

Members of Student to Student are split  into groups of three or four with representation from each branch of Judaism: Orthodox, Conservative and Reform.

“I have to be understanding and willing to explain when someone has a misconception about me or my religion. It shows that there’s not just one type of Jew,” Rosenberg said.  “One common misconception is that all Jews are Orthodox, that they all have the black hats and the black suits and payot, the curly hair on the side of their head.”

Rosenberg believes it is important for others to realize that he can be Jewish but still look like a typical American teenager.

“There are also people who do look more stereotypically Jewish. I do not fit into a lot of Jewish stereotypes, and that does not make me any less of a Jew,” Rosenberg said.

This was Rosenberg, Marks and Seigel first opportunity to present components of their faith, such as holidays, the Sabbath, Jewish life, the Holocaust and Israel.

“They really cared. You could see that they were interested and engaged in the topic areas. They asked questions, so they learned things they didn’t previously know,” Seigel said.

Presentations take place during the school day at schools around the area with limited Jewish populations.

“I hope that they rethink Judaism, not just label it, and maybe gain some similarities between them in their religion. We may not believe the same things or do all the same things, but we’re also people, and they find a bit more middle ground,” Marks said.

The Student to Student program was created with the goal of combating hatred and ignorance towards the Jewish community.

“Misconceptions and stereotypes about religion breed hate and every single person in Student to Student has a story where they’ve experienced anti-Semitism or small aggressions against them,” Seigel said. “One of my friends has a teacher who outwardly showed anti-Semitism, which drove him away from public school. It’s becoming more of a normalized part of our society. A lot of people’s stories had to do with really close friends–people who felt comfortable enough to say things that were hurtful and insensitive. That’s one of the reasons Student to Student is really important right now.”

Rosenberg has experienced offensive speech and micro-aggressions like jokes made about Jews and the Holocaust.

“A lot of times people don’t realize that I’m Jewish and that it might actually offend me,” Rosenberg said. “I don’t care too much when I know they weren’t trying to be mean. If they were intentionally being anti-Semitic, I don’t take it lightly. There are some select individuals who have made it clear that they do not like Jews, and they’re very comfortable saying that to me even though they know that I’m a Jew.”

If students take away one extra piece of information, the objective of the Student to Student presentation has been reached.

“I feel like I had an enlightening impact. [The students] heard about Jews in the past, but they’ve never really met one. Sometimes, I feel as if I am talking to a stack of bricks. If they actually put forth the effort to better themselves and learn about my faith, I feel as if I have accomplished something,” Rosenberg said.