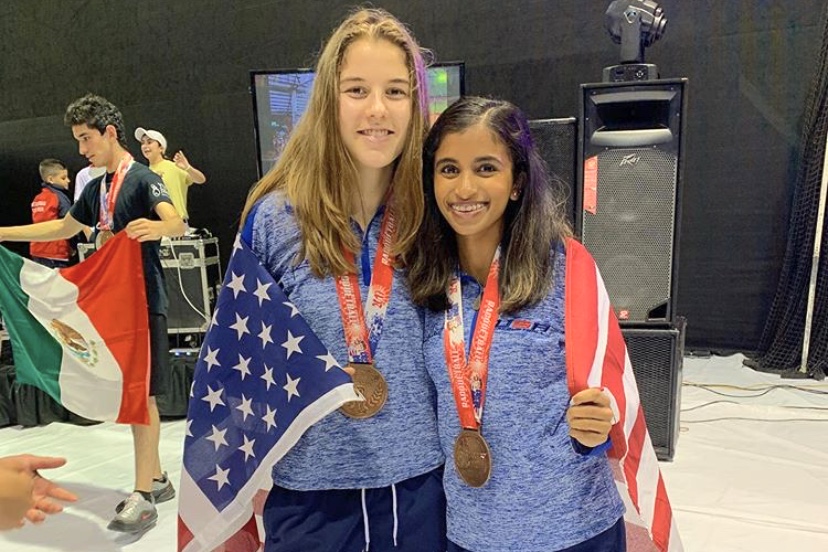 Wrapped in the American flag, senior Erin Slutzky and doubles partner, freshman at University of California, Berkeley, Nikita Chauhan celebrate their performance at the International Racquetball Championships (Worlds). Though this was Slutzky’s second Worlds debut, she won a medal for the first time. “The best thing about getting bronze was the improvement it showed from the year before at Worlds in Mexico where I didn’t get a medal. It meant my hours and hours of training had paid off,” Slutzky said.

Watching her dad and older brother from a young age, Slutzky picked up racquetball in elementary school.

“My dad and my brother would play together, and I didn’t want to stay in the daycare area at our gym, so I decided I’d play with them,” Slutzky said. “I love the game itself because of its high-paced, competitive and individual nature.”

At the peak of her training, Slutzky goes to the gym five to six days a week to drill, play, lift weights or do cardio.

“To prepare for Worlds and that level of competitiveness, I had to train not only physically but mentally as well. I prepared myself for high-intensity situations and staying calm through those stressful tiebreakers,” Slutzky said. “Physically, I was at the gym for two hours almost every night and was eating very healthy.”

Most recently, Slutzky competed at the International Racquetball Championships (Worlds) with her partner Nikita Chauhan. The two won a bronze medal in doubles.

Courtesy of Erin SlutzkySlutzky smiles as she is awarded her bronze medal.

“Since it was my first time [wearing] a medal at Worlds, I had no idea how heavy it was. I took it off right after getting off stage because it was hurting my neck,” Slutzky said. “I was shocked and honored to realize how my views had changed. Last year, I watched people get medals; this year I had earned one for myself.”

Slutzky and Chauhan competed for the very first time together at Junior Nationals in June despite never having played together before. By the International tournament, they had played together twice previously.

“It was very humbling knowing that a lot of people go to Worlds and don’t win a single game, but I was able to go and have enough success to earn myself a medal,” Slutzky said. “I have had to strengthen myself mentally to get to a point where I’m able to compete like I normally do despite the pressure and intensity of the international stage at Worlds. This mental strength has carried over into other aspects of my life too.”