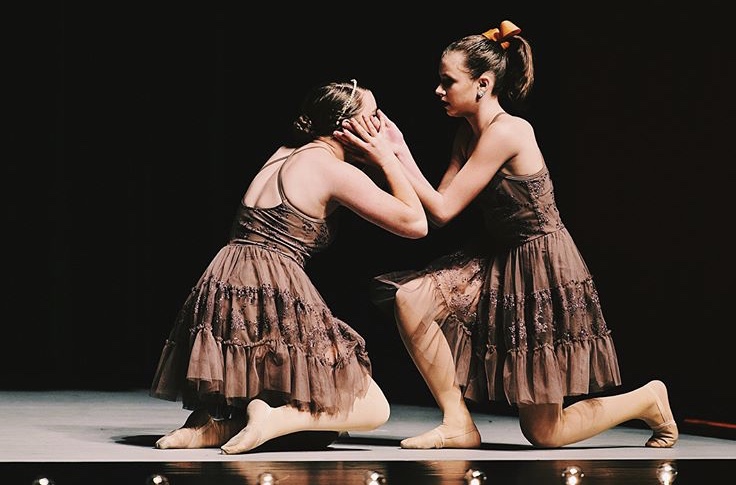 Junior Zoe DeYoung dances alongside her teammate at the Kids Artistic Revue competition. The competition was held in the auditorium at John A. Logan College, and was her second time competing at this competition. “The competition was one of the bigger ones our team had been to,” DeYoung said. “I remember putting on a heating pad after I danced because my back pain had been so bad.”

According to AtYourOwnRisk.org, about half of high school students play sports. Throughout their athletic career, almost half of those students report having an injury from playing sports.

Athletic Trainer Matt Berning says that the risk of having long term effects from a sports injury in high school is very low. Despite this, juniors Zoe DeYoung and Tyler Davis and freshman Emily Kerber suffer from long-term sports injuries.

Growing up, DeYoung was a dancer and constantly felt pain in her back from the intensity of dance. The first time she felt back pain was in sixth grade. Since then she has had lasting effects from her injury.

“There was a point where I was on the floor during class, and I couldn’t get up. My back was spasming; I would have spasms up and down my spine in five-minute chunks where I couldn’t move, so I ended up going to the orthopedist. I got some MRIs and x-rays done and figured out that I had a stress fracture in my lower back,” DeYoung said.

DeYoung’s physical therapist discovered that the injury was from weakness in her back and core, so she built up her core and back strength and gradually improved.

“I really needed to focus on warming up more than most of my teammates because my back just isn’t as strong as theirs, even with all of the [physical therapy] I’ve done. So I need to focus on warming up my core, waking it up before I dance, and warming up my back so all the right muscles are engaged so that I’m in a place where if I do a quick movement, it won’t bring the pain back,” DeYoung said. “Right now, I’m in a place where the pain is not as constant as it was, but there are moments where I can feel the pain, and I can feel the old injury come back. When that happens, I need to buckle down and focus on what I need to do to heal it.”

Now, DeYoung can continue dancing with her teammates, but she is still limited. DeYoung has to spend extra time warming up to keep her back from hurting and take time to rest.

“I had to sit out a lot. I just had to take precautions that I know a lot of my friends in class didn’t have to just because they didn’t have an injury that they had to worry about. There are certain lifts I can’t do, just because of my back, but there are times when I think that I’m holding myself back because I’m scared that the injury is going to come back,” DeYoung said. “It’s really hard because if I do want to seek a professional career in dance, I know that I’m going to lose a lot of jobs. The professional dance world is not as forgiving. So, I’m limited [to] some of the moves that I can do, and I think that limits my future.”

Freshman Emily Kerber has endured knee and foot injuries from dance and swim after years of participating in club sports and is currently unable to participate.

“I started kicking, and when I finally reached the wall, I looked back at my dad, and he asked me if I was okay because I had just gotten out of a knee injury,” Kerber said. “I said no because while I was swimming, I felt a pop and then the second I put my foot down on the ground I heard a snap.”

Kerber’s recovery process is longer given that the same knee and foot injuries have been recurring since second grade due to a growth plate injury.

“With the other [injuries] that I’ve had, I’m normally in a cast for about a week to two weeks. If it doesn’t get better in the cast, then I’m in there for twice that amount,” Kerber said. “I’ll go back and then we’ll read the X-rays, and if it looks good and it feels fine, he’ll send me to rehab for another two months.”

While Kerber is anxious to return to athletics due to her frequent injuries, she is no longer phased by the month-long sports breaks. Despite being in the cast for a few weeks, Kerber’s recovery takes up to two months.

“It’ll be different because you always get that [fear] in your head. You always are hesitant to do it. It normally takes me a while to get back to where I was because I stopped doing it for like two weeks at a time and going back after you’ve missed that amount of time, instead of improving you’re getting worse,” Kerber said. “At this point, I’m just in my head. But I’ve been through it enough where it doesn’t affect me as much.” 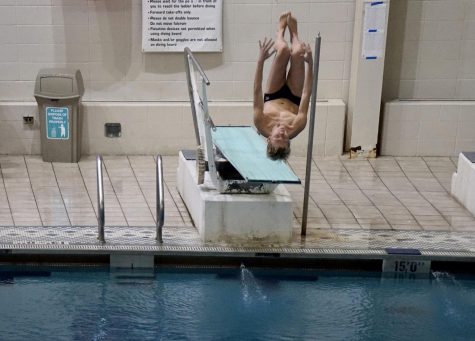 Karen CaudillDavis competes at the MSHSAA Class One Swimming and Diving State Championships. The competition was held Nov. 14 at the St. Peters Rec-Plex. “It felt great to qualify for state after a long season of preparation,” Davis said. “Competing at the meet was so much fun and it was cool to have all my teammates cheering me on.”

After visiting Flying Spider, junior Tyler Davis joined DeYoung and Kerber in their sports hiatus. Davis suffered a compound fracture in his elbow that resulted in long term nerve damage in his wrist and forearm.

“I was messing around on the super tramps when I fell. I could feel the bone and I could see parts of it underneath my skin,” Davis said. “I didn’t know what to think; I couldn’t feel the pain because of all the adrenaline. I just started running to find my parents.”

“They told me that my arm was broken and needed some time to recover, so they put titanium rods in my arm to help fix it. After about 18 months, they took the rods out, and my arm was good as new. The only thing I had to worry about was the long term effects of my injury,” Davis said. “Now, I can’t put my hand flat and I can’t do simple exercises like push-ups.”