Father-son duo: The in’s and out’s of being the coach’s son 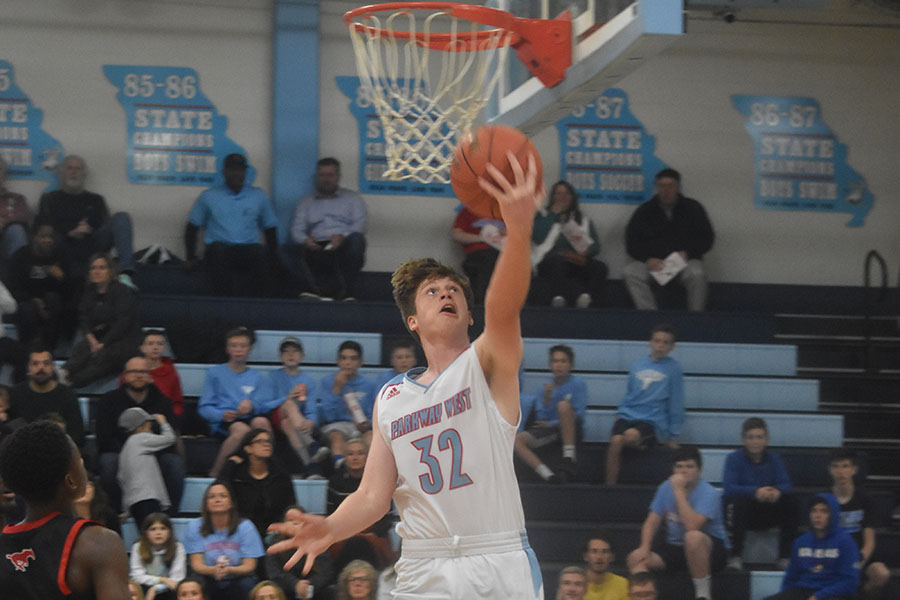 Finishing the layup, sophomore Luke Wright scores another basket in his first career varsity start. Wright went one of four shooting in the season opener. “I was really proud to be a starter but I know I could’ve played better that game,” Wright said. “I'm ready to see where this season can go.”

For the last six years, boys varsity basketball coach John Wright has coached his son sophomore Luke Wright for the Junior Longhorns and now at the high school.

“Since I’ve always been around high school basketball, I think I’ve really developed a passion for the game,” L. Wright said. “I’ve definitely had more exposure to the game just because my dad always brought me to games and practices.”

Although he has the benefit of being around the coach 24/7, L. Wright also feels that it comes with its downsides.

“Sometimes we get mad at each other at home, and it’s hard to keep that from carrying over to the court,” L. Wright said.

Wright feels extra pressure from being the coach’s son, especially because he is being coached off of the court as well.

“Even when I play well, I know he’s still going to tell me what I did wrong that night at dinner or in the car on the way home,” L. Wright said. “Sometimes, I don’t like it, but usually, it helps me, especially if we won’t have another practice for a few days.”

After making JV his freshman year, L. Wright faced a lot of adversity from peers, accusing him of being on that team solely because he was the coach’s son.

“I mostly faced mean comments when I was younger and last year because I was a freshman on JV,” L. Wright said. “But I’ve learned how to ignore the people who don’t like it, and I try to prove them wrong on the court.”

The father-son bond not only benefits L. Wright and J. Wright, but it can also help the rest of the team as well.

“[J. Wright] is just able to read Luke in warmups, and he can really tell if he will play well that game,” sophomore Hudson Ribble said. “After that, he could be able to set up a game plan around Luke if he thinks he could play well, or base it around someone else if he doesn’t think so.”

Wright also has connections to college coaches from his job, which can give his son the same connections when looking at colleges for his future.

“I have met new coaches through my dad,” L. Wright said. “I’ve met with a lot of college coaches because of my dad, and I’m grateful for the experience and chance I’ve had because of it.”