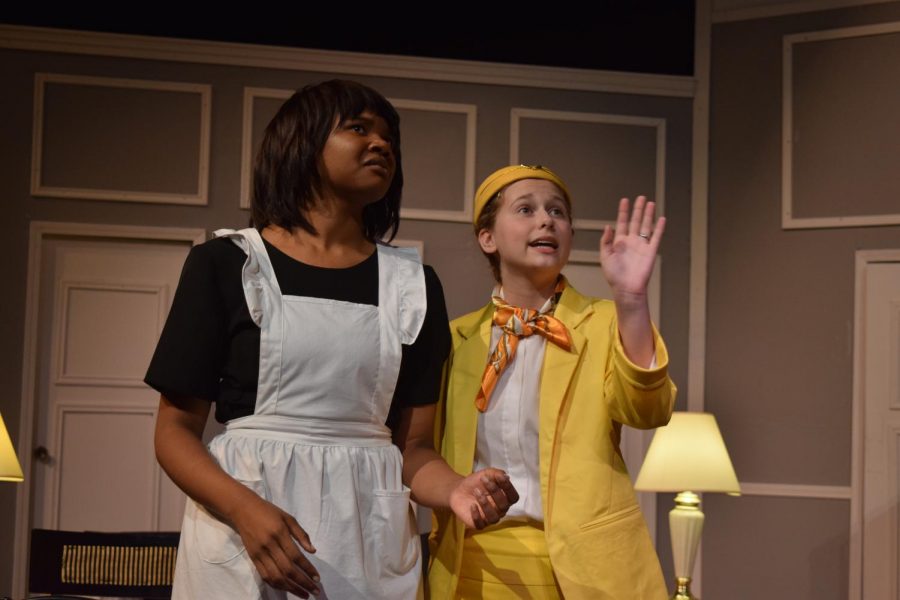 Robert (senior Charlie Foy) resentfully gulps down a glass of whiskey. From across the room, Bertha (senior Aaliyah Weston) sets the house rotary phone back onto the desk and pivots towards the former.

The performance itself? Anything but bumpy. As a thespian who has performed in mainstages, one act plays and improv shows, the Parkway West Dramatics Company’s adaption of “Boeing Boeing” Oct. 4-5 met all my expectations and then some.

If there is one event we actors perpetually dread, it is the Saturday matinee–the showing that I attended–sandwiched between its two evening counterparts. I can assure you firsthand that few things in theatre are more disheartening than oftentimes futile attempts at generating liveliness among what is typically the lowest-selling–and lowest-energy–crowd of the production, yet the cast delivered an all-around captivating rendition of French playwright Marc Camoletti’s farce.

The plot, centered around Bernard (senior Dennis McMorrow) juggling simultaneous love affairs with flight attendants Gloria (junior Gillian Davis), Gabriella (junior Clare Weaver) and Gretchen (senior Katie Solodar) through an intricate series of flight timetables to ensure that only woman is in Paris at a time, lent itself to two and a half hours of intrigue and complexity.

Before the first act began, however, it was evident that keen attention to detail would be the show’s calling card. From the painted stage resembling a wooden floor to the framed pictures of Bernard’s lovers sprinkled throughout his 1960s home, the set was easily the most thorough and well-designed I have seen in my high school theatre career. Moreover, the program’s comprehensive glossary of aeronautical lingo and the recitation of pre-show announcements regarding cell phone usage and intermissions as if by an airline captain speaking to passengers prior to takeoff set the tone for an afternoon greatly enhanced by nuances at every corner. 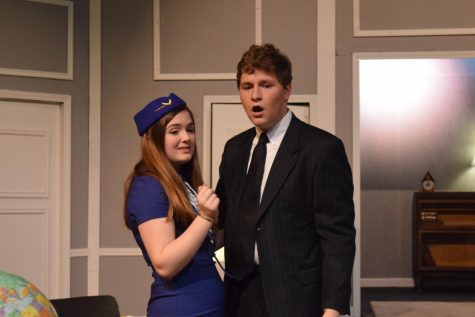 The performance embodied this ambiance as well. The poise of a cast comprised of two juniors and four seniors shone through, the subtleties of their blocking and mannerisms creating more polished characters. Foy and McMorrow exhibited commendable chemistry as they navigated a dynamic between the archetypal straight man resonating with the audience and his idiosyncratic friend that evolved–and at some points reversed entirely–throughout the play. It was a pleasure watching Davis, Weaver and Solodar explore the show’s theme and their relationships with Bernard through paradigms of callous calculation, skepticism and zealous passion, respectively. All the while, Weston’s role as a disgruntled housekeeper provided both a foil of sorts to the aforementioned women in addition to a steady presence on stage who could reliably be called upon to maintain the necessary pacing.

The company rebounded from a relatively disjointed cadence to open the third act to execute arguably the most poignant moment of the play: an exchange between Robert and Bernard underscoring their changes of heart as the timetable scheme unravels. That said, not all characters enjoyed the same level of in-depth elaboration. Despite the production’s commitment to “fit a more forward-thinking world” per the program, the four female characters were routinely pushed around both literally and metaphorically. Though superior to the original play in this regard, crude humor occasionally took precedence over further developing these personalities. My foremost criticism of the show was the depiction of Robert and Bernard manipulating and degrading the women in their lives; insight into their perspectives was lost in lieu of comic relief that had me grimacing more than laughing at times.

Holistically, “Boeing Boeing” offered sheer wit like few other productions in recent memory. The script’s absurdity alone garnered ample amounts of laughter, but it is the minutiae within virtually every facet of the performance that propelled it from good to great. Nimble jokes were plentiful to keep the audience on its toes, whereas multidimensional character interactions prompted deeper ruminations of what it means to love and what truly brings us happiness in life. Quite the soaring success, if you ask me.