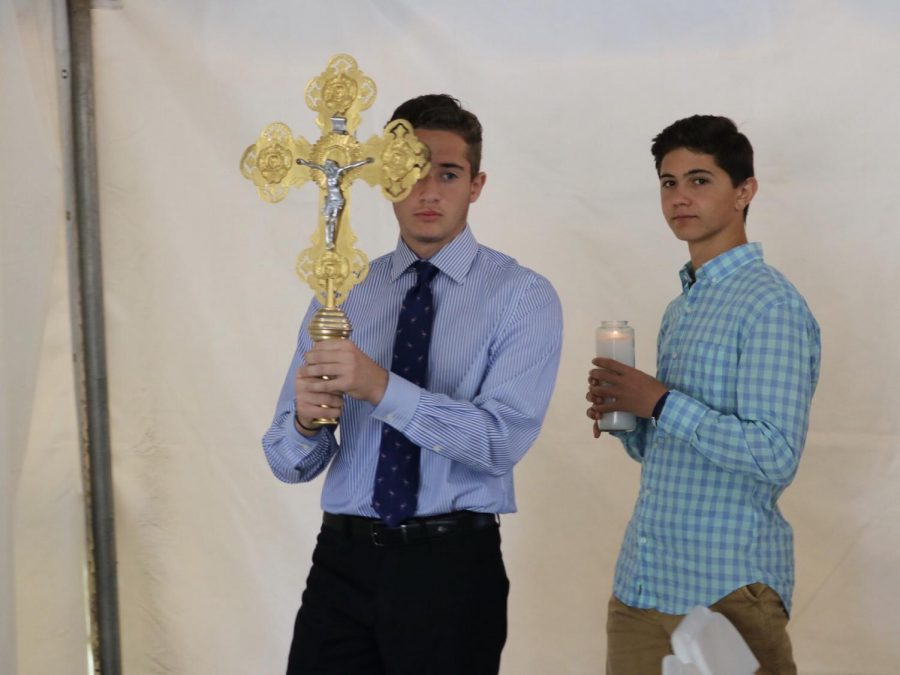 Sandburg High School junior Christian Vouris carries a cross alongside junior Alex Sevastianos during a service. They walked around the outdoor chapel and held the cross while the other campers prayed. “This was morning literacy,” Sevastianos said. “I volunteered to help the priests conduct the service on the last day of camp.”

Junior Alex Sevastianos walks down a dark, forested path with only a candle to light his steps. A line of students and a counselor follow close behind, listening as he chants hymns and recites Bible verses. Just one year before, he never imagined having this experience.

After past instruction from a theology teacher at a Catholic school, Sevastianos nearly turned his back on religion. Then, with the help of Fanari Camp, a Greek Orthodox summer camp, his mindset shifted.

“At my [former] high school, my theology teacher would shove the aspect of religion down my throat,” Sevastianos said. “That’s a big reason why I left the school. I felt like the only one there that didn’t understand what we were learning about. Hating the class made me start to hate the religion, too. I thought, ‘what is the point of this?’ This led me to wonder if I was agnostic or atheist.”

Sevastianos felt like an outsider in class, as he was one of the only students who didn’t go to a Catholic grade school.

“I stopped focusing on religion as much after I left my old school,” Sevastianos said. “Then, the summer came, and I went to a camp for the Greek Orthodox faith. I had gone to the camp before, but I had never really gone for the religion, more so for the social aspect.”

The camp is for sixth to 11th graders in the Greek Orthodox faith, and is held at St. Lakovos Retreat Center in Kansasville, Wis. every summer. The true purpose of the camp is for the youth to have the opportunity to “share their common faith and heritage through its many programs,” and ultimately, to find Christ.

“I walked in thinking I was an atheist, and I even told the kids in my camp that I felt that way,” Sevastianos said. “I didn’t go to confession that day because I thought, ‘why am I confessing to a God I don’t believe in?’ We had to pray four times a day, and during the prayers, I would just sit there. Most of the kids at the camp believed in God, and I felt like they didn’t even question it. I felt like an outcast.”

A few days into camp, the care and support from his camp friends and Fanari counselors helped Sevastianos’ faith grow.

“This time, I really got to experience faith through a whole different perspective. There was a sense of comfort in the religion that I had never felt before. I was more mature, and because of this, I was more open to religious beliefs. Previously, my doubts about God had always gotten in the way of my faith. When I actually accepted the idea of [religion] was when I truly embraced it.”

“After coming home I felt like [the religion] made more sense,” Sevastianos said. “But you’re always going to have questions, and there’s always going to be a piece of you that doubts because you don’t see God.”

Sevastianos’ newfound faith has employed a new sense of motivation and drive in his day-to-day life and is pushing him to serve those around him.

“I really have felt motivated by God to make a difference for society. I am now making plans to start a walk-a-thon at the school to raise money for Alzheimer’s research,” Sevastianos said. “I’m trying to do all I can to serve while I’m here and to truly make a difference.”