Sexism in speech and debate: competitive speakers’ fight for their voice 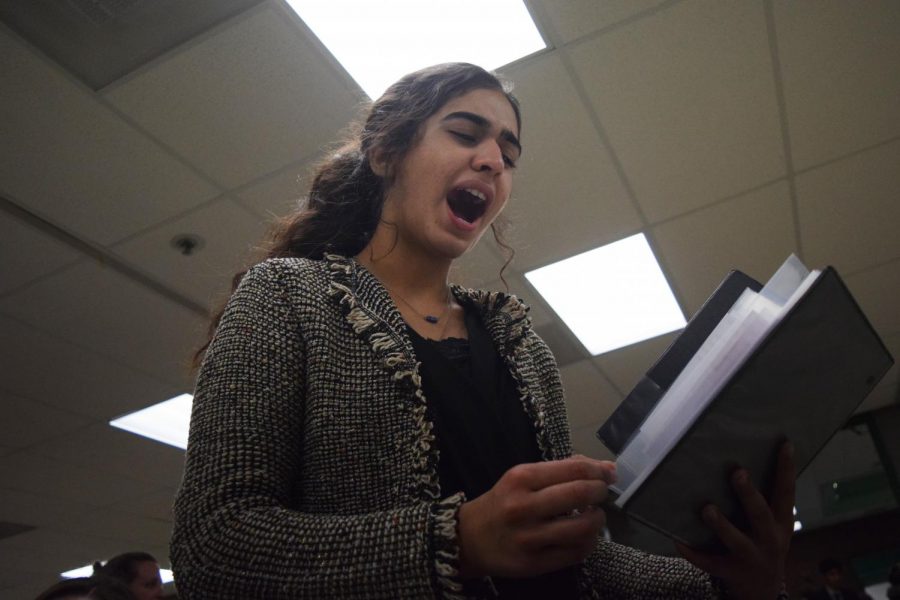 Making final adjustments during practice, junior Fatema Rehmani prepares for the Randy Pierce Winter Classic at Pattonville High School Dec. 7, 2018. Rehmani competed in Program Oral Interpretation, an event in which students incorporate various selections of literature into a 10 minute performance. “This year, I explored some different events in speech and debate, and I’m so grateful for all of the various experiences I’ve gained,” Rehmani said. “But I have noticed there are definitely expectations for certain events or debate in regards to whether it’s for guys or for girls, which is sometimes limiting and frustrating.”

It is the conversation that speech and debate coach Cara Borgsmiller is forced to have several times each season.

“I talk openly about it, especially the first time they get a ballot that says something about it.”

You were rude to your opponents.

Your tone of voice was annoying.

Your skirt was too short.

“It” is the bias that women must confront at every speech and debate tournament.

Despite the National Speech and Debate Association’s (NSDA) mission statement emphasizing “a diverse community committed to empowering students,” female members of the community are voicing concerns in response to pervading sexism in both the debate space and society as a whole.

I have participated in nearly 100 speech and debate rounds, yet certain facets of the activity have been little more than afterthoughts for me as a male. No single round better encapsulated this than the fifth and final round of the Greater St. Louis Conference Tournament Oct. 20, 2018. That round would determine whether or not my male partner and I clinched the tournament championship–although we were hardly dressed for the occasion. My female opponents’ carefully-selected formalwear likely cost hundreds of dollars, the slightest imperfection posing humiliation and a risk to their ethos. As for my partner and I, we felt entirely comfortable expressing ourselves however we pleased. To pay homage to a late teammate and protest lavish clothing norms we believe discourage low-income students from participating in speech and debate, we sported t-shirts and jeans–with relatively little consternation.

Never during the round itself did I think twice about curtailing my voice modulation, interweaving lighter, conversational speech with a more authoritative tone whenever circumstances prompted one. Both sides in the debate incisively asked and responded to questions during cross-examination periods, but when it came time for the judge to declare a winner, their ballot contained a message for the two girls: “Your disrespect towards your opponents lost you the round.” While the judge reprimanded them for discourtesy and snarky presentation, my partner and I received praise for our poise and assertiveness. What implicitly boosted our credibility only undermined the supposed merit of the girls’ arguments.

Sexism in speech and debate underscores much broader issues that I myself will never experience firsthand. In order to better understand this complex but alarmingly prevalent subject, I sought the insight of my female teammates and coaches. What follows are their stories and perspectives on matters ranging from dress code to voice tone to everything in between.