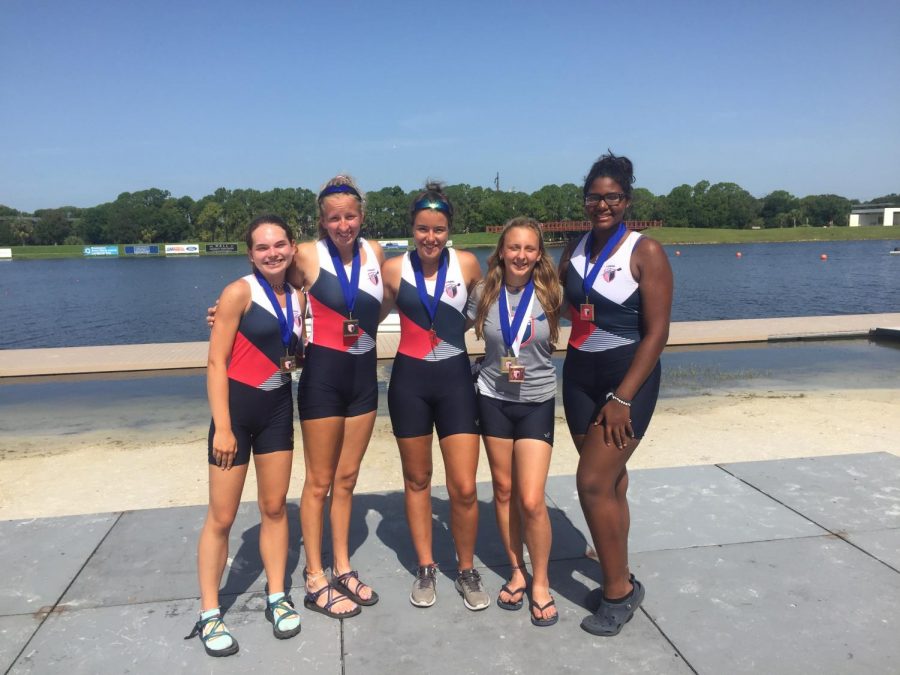 Aside from learning rowing techniques and mindset skills, junior Emma Wistuba also spends time bonding with friends during her month-long stay. The girls resided in dorm rooms and spent breaks getting to know one another. “There are always going to be people that you don't get along [with] and ODP helped me overcome that. I knew I wasn't going to [immediately] get along with everybody, so I went out of my way to be nice and do things,” Wistuba said. “One night, the whole floor came into my room, and we started making friendship bracelets. That's what we did, and we just had fun. That's important for my future because I'm going to have to do that around people who I really don't like, and it's important that you can take those people and turn them into people that you can be friends with.”

Submitting an application led to Wistuba’s invitation to spend a month in Philadelphia, where she focused solely on getting fitter and faster.

“I got the email, and there was just one thought in [my] mind: I’m going. It was [an] opportunity to row for a month, for over five hours a day some days, and push myself as hard as I could,” Wistuba said. “Sometimes you don’t get that on your club team, which is kind of sad because they don’t want to push you super hard like they did at ODP, but that’s what I needed.”

A driving factor in Wistuba’s decision was not only to further her learning of rowing technique but to also improve her mindset and attitude toward obstacles in life.

“I understood the value of having strong members who support you through stuff because it was hard being pushed that hard everyday,” Wistuba said. “It is a lot, so having good teammates and having a positive environment was very important”

Constantly exploring her limits can take its mental toll, but instead Wistuba found it motivating.

“The harder it got, the more I wanted to push myself because I wanted to meet certain expectations of myself and surpass them. That’s the way I was raised. Once you reach the ceiling, you don’t just stop,” Wistuba said. “Next year, I want to get into High Performance Camp. I really want to accomplish that for myself.”

Continually expanding her horizons shows Wistuba the importance of setting goals and achieving them.

“[Camps] help me achieve my goals because you know that your limits aren’t set. They’re always changing, expanding and shrinking,” Wistuba said. “Some days, you’re not going to get enough sleep. You’re not always going to get something, but there are still expectations of you that you have to meet. There’s no leniency.”

While Wistuba realizes some may call her athletically gifted, she believes that success doesn’t stem from talent.

“If you push yourself and push yourself and push yourself, you’re eventually going to get to be a high performance rower. We don’t just wake up one day and be a high-performance rower– it takes dedication, training, never missing a practice and having fun while you’re doing it,” Wistuba said. “There’s no such thing as being naturally gifted at something because we all have certain levels that we want to push ourselves to. We all want to achieve something.  You always hear somebody complaining like ‘oh, I can’t do it,’ but that’s a limitation of your mind. You can do it, you just have to do it.”