Sophomore Santi Lugo gains perspective about the world through travel 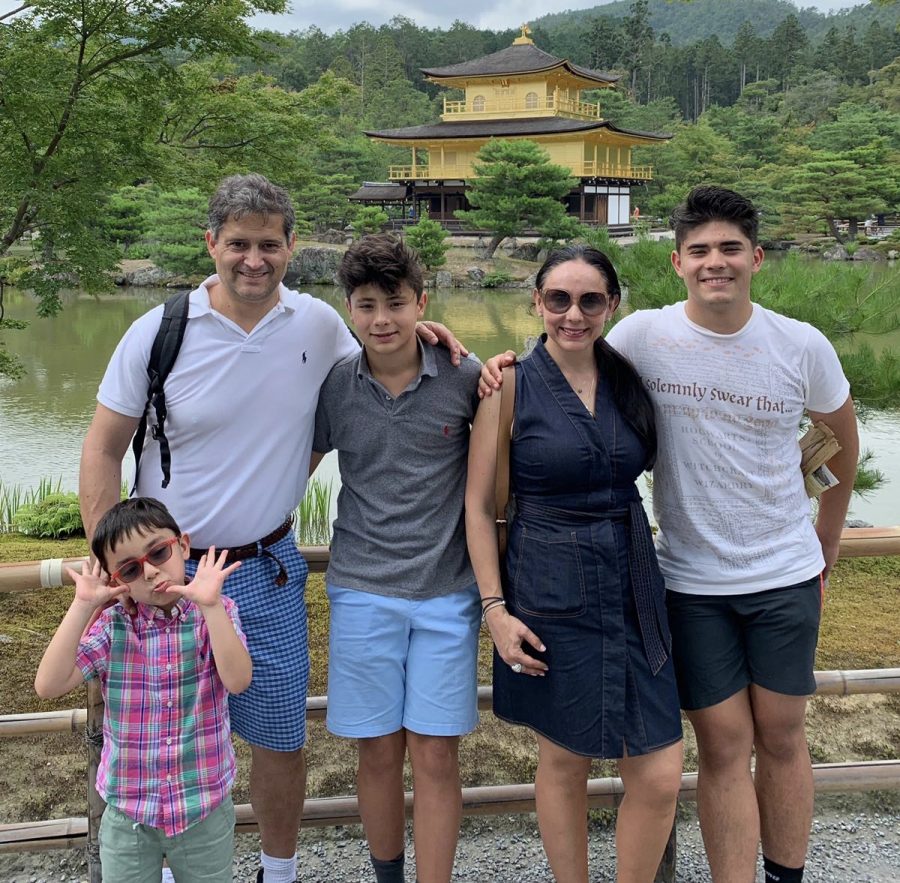 Visiting the Kinkaku-ji, a Zen Buddhist temple, sophomore Santi Lugo and his family pose for a photo. The temple, also known in translated Japanese as the “Temple of the Gold Pavilion,” is one of Japan’s most popular buildings. “It was a long trail, trees all around, and the sound of rocks being stepped on crowded my ears. When you’re walking, you’re unable to see anything until suddenly you see a gold point rising above the trees that leads to the peaceful stream below the astonishing temple,” Lugo said

Taking in the sites of the rainy city, sophomore Santi Lugo explores Tokyo, Japan, the newest destination in his travels around the world.

“It has astonished me how modern the city is yet how blended the historic and modern [parts] are. It’s amazed me that it’s all interconnected. Amazing temples are next to very ludicrous and modern corporate buildings, and it’s been really interesting to see,” Lugo said.

Lugo has visited places such as Croatia, Greece, Spain, Italy, Israel, Morocco, Egypt and more by moving to new countries and for family vacations.

“When [my family] moved to Budapest, Hungary, we truly embraced traveling and made it a huge aspect of our lives. We had the opportunity to see Europe and all it beheld first hand. Northwest, we could travel to Vienna in an hour and a half by car, Prague resided four hours by car to the north, if we traveled by plane, we could be in Spain in two hours and Greece was an hour and a half flight south. [It’s] such an eye-opening experience, and it completely opened the world up to me,” Lugo said.

While discovering the culture of Japan, Lugo found the cultural dynamics fascinating but different from norms in other countries.

“Everything is very systematic, and I feel like the people are too. You see people walking to work, and they look like robots just walking with no concern for their surroundings, going through their routine. There can be thousands of people walking with no true concern for what’s around them, and that astonishes me,” Lugo said. “But also, most of the people have such an outstanding conviction to understand you and help you. By the mere fact that they want to help you, in the end, they will understand you.”

To fully immerse himself in the society of Japan, Lugo enjoys walking the streets of the cities and encountering people in their daily life.

“We’ve walked across some poor and not-so-nice neighborhoods, but all it serves is to give us a perspective that every country has people who suffer,” Lugo said. “To truly assimilate the culture of a place and learn from it, it is necessary to immerse ourselves in every aspect we can of the society and of the culture, not just the jaw-dropping, picture perfect places.”

Knowing that life may never give him the chance to return to some of these places, Lugo takes many mental notes and pictures of his travels to remember them.

“It’s one thing to learn how big the Colosseum is, to hear how magnificent the Eiffel Tower is, to ponder how important Vatican City is, but to actually see it in person gives it a new dimension,” Lugo said. “Traveling reminds me that human capabilities are endless. It has shown me the magnitude of what humans have done and demonstrates that there is still potential to do so much more.”

Lugo has learned a lot about the cultures, societies and people he has visited when traveling, but he’s also discovered new things about himself.

“What I like about traveling is breaking the routine of daily life to explore the world. I feel like I learn most about myself when I’m traveling,” Lugo said. “Those long plane rides and hours walking around a city has given me so much time to think and learn about myself, about how the new perspectives I’ve acquired while traveling can better me as a person, can make me a better global citizen and [can make me] better suited to make a positive impact on our world. It’s also made me more empathetic and showed me a new side to human experience.”

Along with learning things about himself, Lugo has uncovered truths about the world that arise when embracing similarities and differences.

“Everyone around the world has the desire to be accepted, to be loved, to find happiness, to live a life worth living, yet we let the more superficial aspects of our beings get in the way of what truly matters,” Lugo said. “I feel like if people traveled more and had the opportunity to have better compassion for people around the world, then we could all coexist together and work towards doing good, not employing destruction and hate.”