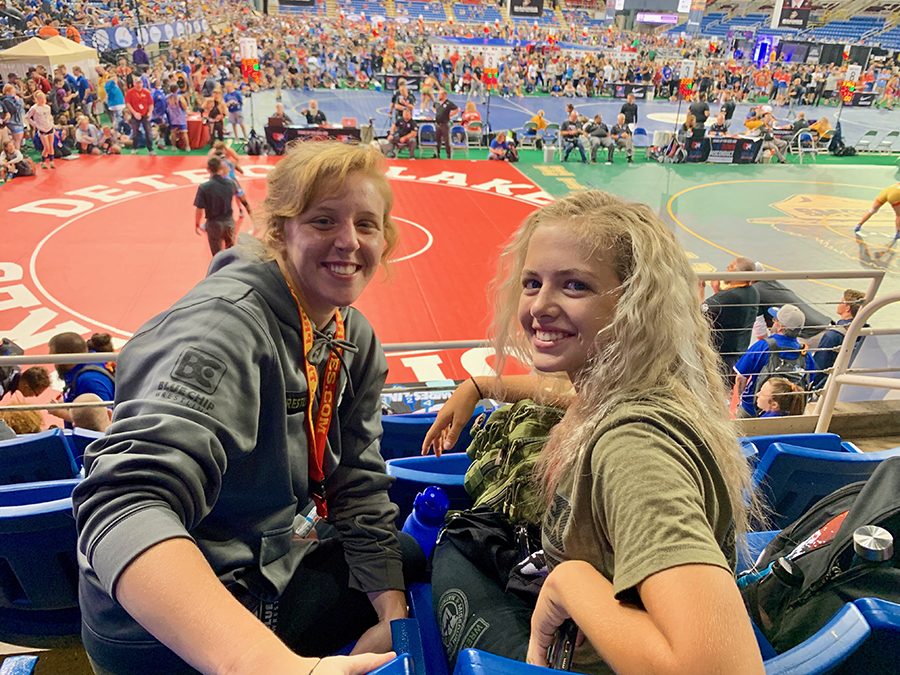 Watching teammates wrestle from the bleachers, sophomore Paige Wehrmeister and teammate Emma Cole bond through their common interests. Following the trip to Fargo, Wehrmeister continued to spend time with the friends she made during her trip to Fargo. “We were all representing the same state, and after all that time together, I developed close friendships with some of the girls,” Wehrmeister said.

The stadium seats rise up around her with the capacity to seat 19,000. On the mat wrestling at the U.S. Marine Corps Junior Nationals, also known as Fargo, is sophomore Paige Wehrmeister.

Wehrmeister traveled with her team, consisting of around 100 boys and 56 girls, to Fargo, N.D. from July 12 to 19 in hopes of gaining wrestling experience.

“I know that in order for me to improve, I have to keep pushing myself and wrestle against really experienced wrestlers,” Wehrmeister said.

Travelling and participating in the workshops gave Wehrmeister the chance to bond with her teammates and gain new friendships.

“My friendships with the other girl wrestlers are different because on the mat it’s about wrestling, but off the mat, we can have girl talk and goof off,” Wehrmeister said. “It helps me know that I can be a girl and still be a focused wrestler.”

Wehrmeister got the chance to wrestle at Fargo by competing in different prerequisite tournaments such as Freestyle Wrestling State.

“I was a little intimidated when I first heard about [Fargo] because I knew it was huge,” Wehrmeister said. “But once I was there, it felt like just another tournament where you would wrestle, cheer on your teammates and have fun.”

Watching her teammates’ matches showed Wehrmeister what can happen when you don’t give up.

“The amazing matches I watched showed me that upsets happen,” Wehrmeister said. “My friend Faith Cole was wrestling her finals match, and the girl she was up against had beaten her two months prior, but Faith was still able to win.”

Wehrmeister believes she gained life skills in addition to the wrestling skills during her time at the workshops and in competition.

“To me, wrestling means pushing yourself harder than you think you can [both] mentally and physically, bruises, hard work, determination and shaving in the winter,” Wehrmeister said. “Wrestling [also] teaches that you get out what you put in and to trust in your abilities. It teaches you how to work hard, and you can always use that in life. I constantly use hard work in everything; it helps me excel in my classes at school and CrossFit.”