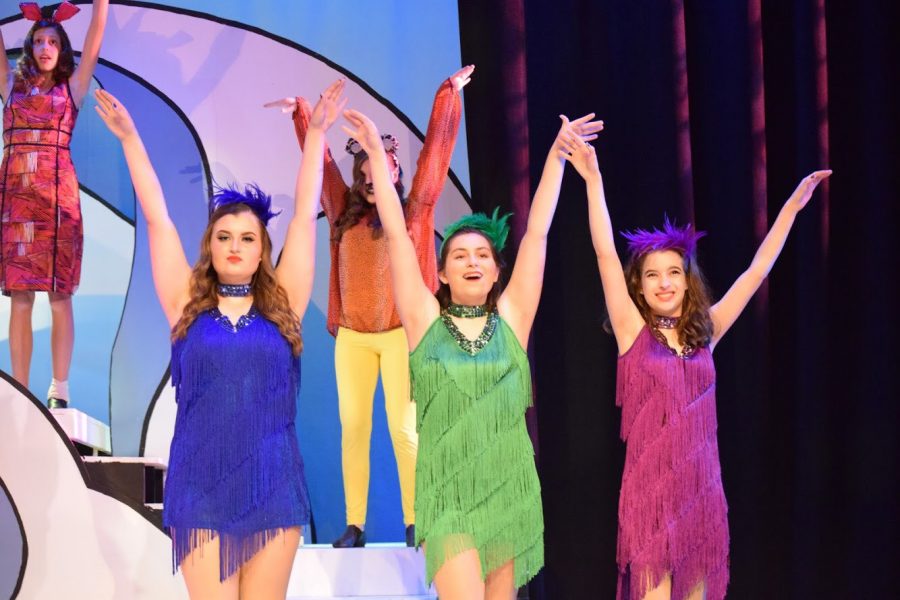 Performing in the musical “Seussical,” sophomore Anna Stephens dances and sings on stage in a purple dress alongside two other performers, playing one of the Bird Girls, a supporting lead role. Stephens was cast in the production through a local company called Spotlight Productions. “I loved getting to be sassy and have fun with my friends on stage. The Bird Girls helped narrate throughout the story and I loved the costumes very much,” Stephens said.

Reading an article she wrote in front of her fifth grade class, sophomore Anna Stephens discovered a talent and comfort for speaking in front of crowds. With her first performance under her belt, Stephens began exploring similar environments and found an interest in musical theatre.

“I always feel at home in a theatre, and I just absolutely adore what I do. I always come back because I love singing, dancing and acting with my friends. It is so fulfilling to nail a dance number or nail the high note in a song,” Stephens said.

Over the summer, Spotlight Productions, which is a joint theater program between Parkway and Rockwood, hosted a musical, where they performed “Newsies” at Marquette High School July 12-14 and July 19-21. Auditions at Spotlight are highly selective; the initial audition was singing a song, but callbacks consisted of looking over material for a specific character a day before the audition. 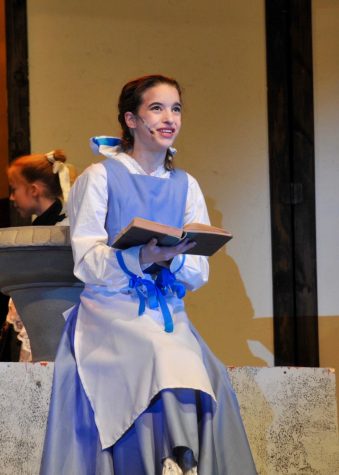 Courtesy of Anna StephensAbout to perform the song “Home,” Stephens speaks out towards the crowd during her role as Belle in “Beauty and the Beast.”

“The audition process was very exhausting and scary. In theatre, people are rejected every single day,” Stephens said. “It can be so hard to keep going after being rejected from a show, not getting the role you want or being put as the understudy, which always hurts the worst. It is so hard to keep moving sometimes.”

Ultimately, Stephens was cast in the ensemble for “Newsies.” She practiced three hours a day for five days a week, and tech week included up to six hours of rehearsal per day almost seven days that week to get the actors ready with their costumes, lights, sound, set and makeup.

“Spotlight was a huge commitment and a highly selective process. It was a ton of work because we had to put an entire production together in less than a month,” Stephens said. “Musical theatre requires years of training and lots of strength. Just like athletes, actors have to be in great shape and have years of training and experience to really succeed in the business. Lots of people assume what we do is easy; it is not. You have to have a positive attitude and lots of training to really thrive at Spotlight.”

Stephens arrived at the theater 30 minutes before call time. To prepare for the show, she applies her stage makeup, puts on her costume, has a microphone check, stretches and warms up her voice.

“I have never dealt with stage fright, but for people who do, I recommend starting out small, like singing karaoke with a couple of friends, then moving higher, being in the ensemble of a musical with a bunch of other people, until you feel comfortable enough to go on by yourself and sing. You have to face your fears to get over them,” Stephens said.

Before performing in “Newsies,” Stephens participated in middle school musical productions of “The Lion King” and “Beauty and the Beast.” Outside of school, Stephens has taken acting classes through STAGES Performing Arts Academy as well as tap dancing and voice lessons for the past five years. 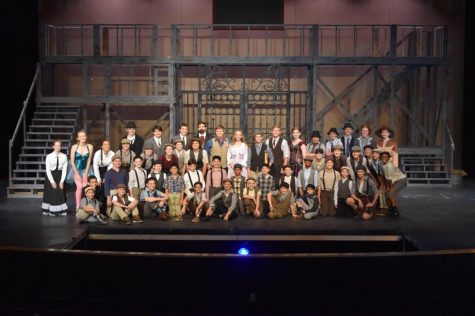 “My sixth grade year, I auditioned for the school musical and was cast. That’s when I realized my love for singing and musical theatre. Mr. [Kareem] Deanes, down at the middle school, was a huge inspiration to me,” Stephens said. “Musical theatre has encouraged me to gain confidence and feel proud of something I’m doing. I have made so many new friends from doing theatre and I love my theatre family so much.”

Between long hours of rehearsal, Stephens attended shows at The Muny and The Fox Theatre to keep learning from others and push herself to participate in other theatre projects down the road.

“Spotlight has been one of the best things I ever discovered, and I’m grateful everyday that I get to be a part of it. I look forward to auditions every year, and I love the cast and crews that I work with every year,” Stephens said. “Musical theatre is amazing, and I recommend that everyone who is interested to give it a shot. I also work in the theatre department at West High, and I recommend that people come support that as well.”