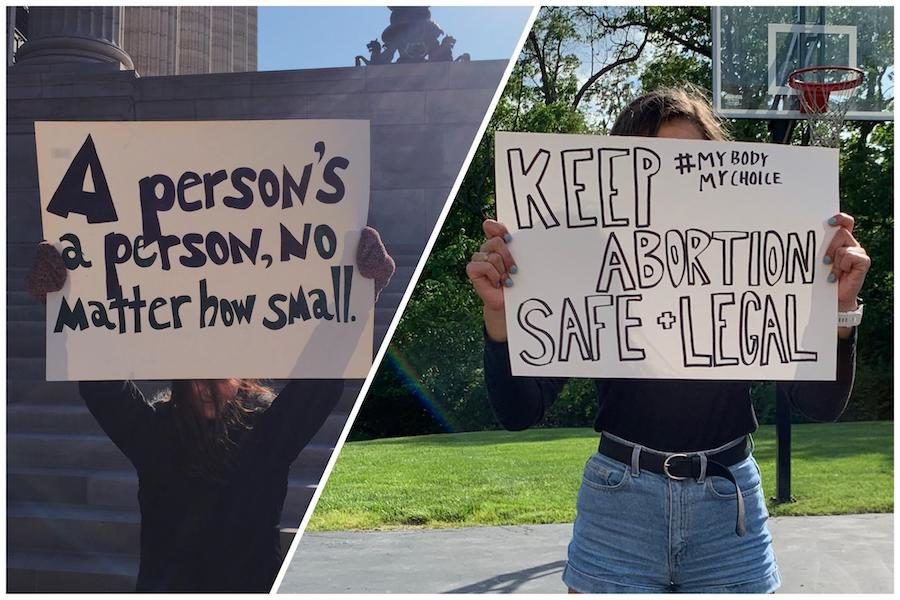 Holding pro-life and pro-choice signs, students advocate for their stances on abortion rights.

Students took to social media to voice their opinions in light of the Missouri General Assembly passing H.B. 126, a bill restricting abortion that Governor Mike Parson is expected to sign into law within a week. The bill, which would instantly become one of the most stringent abortion policies in the U.S., stirred up controversy between pro-life and pro-choice advocates.

“I feel like [the bill] is something that needs to be talked about. If nobody talks about it, it’s just going to be like, ‘alright we passed a law, it’s over now,’ which is the case for a lot of things,” junior Zane Alshekhlee said. “Personally, as long as posting on social media brings awareness to others, that’s a win in my book. I know me alone is not going to do anything, but if I could just at least say, ‘hey this is going on, can you all open your eyes for once,’ that would mean a ton.”

The bill, outlawing almost all abortions eight weeks after conception, makes Missouri the fifth state to pass what is known as a “heartbeat bill.” However, pro-life activist and sophomore Molly Reinecke feels that the bill should have gone further.

“I think it’s a good step towards no more abortions and all babies getting to live. It’s obviously a good step to eliminate abortion when the heartbeat starts, but it could be better by eliminating all abortions,” Reinecke said. “It’s a step in the right direction, but I don’t think there should be any time frame. Saying that there isn’t a heartbeat shouldn’t justify that it’s not going to be a human being and it shouldn’t have a chance for life at all.”

H.B. 126 allows exceptions for medical emergencies but not for pregnancies caused by rape or incest.

“Being pro-choice is important to me because as a young women, I know me and many of my friends’ biggest fear is being raped. That’s just kind of a norm. Keys sticking out in your hands when you’re walking, looking around really fast–guys don’t have to worry about that,” Solodar said. “That’s a constant fear that you have–the thought that that could happen to anyone one of us. If this bill goes through, we won’t have the option of abortion if we end up getting pregnant, and it’s scary. It’s my body and my uterus. It’s important to me because the government should not get to decide what I do with my body. That is up to me. This could begin a process of deeply infringing on the rights of women.”

While pro-life supporter and junior Brooklynn Urban agrees that abortion should be allowed in cases of rape, her personal adoption experience affects the way she views the issue.

“If someone is raped, they should have the right to abort the baby. Personally, I wouldn’t, but I know that some women cannot handle that. My parents were young and addicted to drugs and not fit to have children, so the idea of abortion was in the air for me. It was possible, but they decided to keep me. If they didn’t, I wouldn’t have been here,” Urban said. “There are so many arguments about kids going into foster care and into the system, but I am living proof of going through the system and finding a family because I was adopted.”

Urban argues that people who have the possibility of becoming pregnant should know and understand the risks.

After seeing these arguments made on social media, Solodar researched the pro-life movement to better understand the other side of the abortion debate.

“I watched some pro-life videos; it was very hard, but I wanted to try to understand those arguments. My mind didn’t change, but I hope that the other side can do some research too. We currently have a middle ground, and that’s the Roe v. Wade case,” Solodar said. “Just try to think about everyone else that already has a heartbeat and already has a life. Give us a listen before you ignore us because we are scared. If you do not have a uterus, this does not affect you, so please protect us. If you don’t want to have an abortion, don’t have one, that’s fine, but you have to leave it open for other people.”

As other state legislatures voted to pass new laws, including an Alabama bill prohibiting abortion after six weeks, activity surrounding the issue skyrocketed across social media platforms, sparking hundreds of thousands of posts May 15 alone. Solodar, along with other students, shared posts on their Instagram story explaining their beliefs.

“I hope we can convince people that if they never want an abortion, they can never get one, but they can also accept that for other people, abortion might be the right choice. Pro-choice does not mean pro-abortion, it just means that we’re not generalizing the needs of every single person who has a uterus,” Solodar said. “I hope that we can show [lawmakers] that we are also constituents and we also matter. I hope we can open peoples’ minds. I hope [this debate] remains peaceful and as polite as possible with this being a very passionate thing.”

In response to the bill, students and activists across St. Louis are planning a protest for reproductive rights May 25 at Union Station.

“A lot of us are feeling lost because this is taking control away from us. The desire to do something is very strong for those of us that are passionate about it. We want to be able to go out and show all of the government officials that we’re not joking around and that this is serious. I can’t imagine myself not being a part of the movement,” Solodar said.

Pro-life students also plan to continue to spread awareness about their movement.

“I saw a lot of pro-choice arguments that could be so easily refuted recently, and I thought, ‘why is no one else doing this?’ so I decided to post on social media,” Urban said. “They have valid arguments, and it’s definitely a sensitive topic. Overall, if you mess up because you were irresponsible, that should not affect the life of an unborn child.”

A divisive issue across the country for years, abortion continues to be a hot topic today as a new generation of voters reach adulthood. The Missouri bill, once signed by Parson, will go immediately into effect due to an emergency clause; however, it is expected to trigger a court challenge that could either reverse the bill or overturn Roe v. Wade.