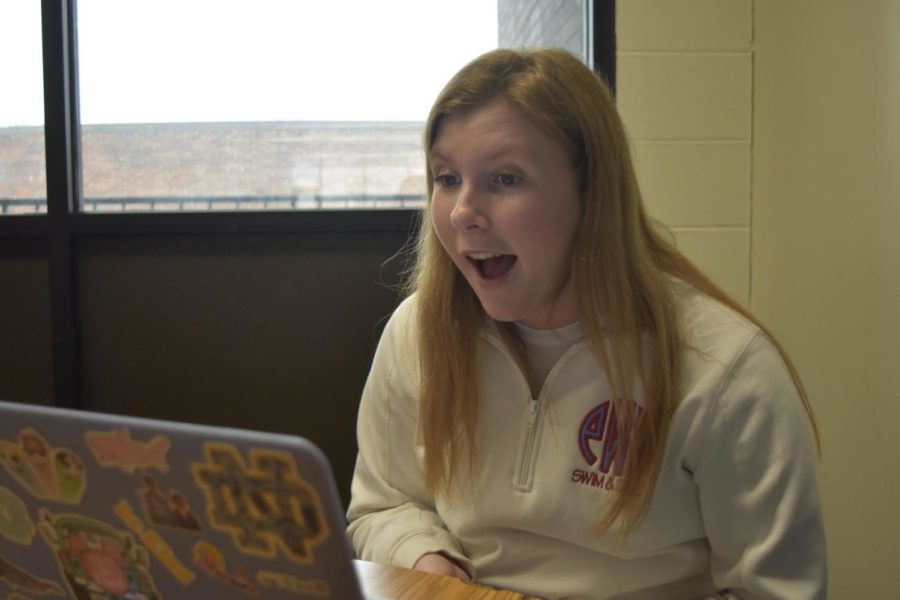 In a Boomalang session, junior Quinn Berry practices her Spanish skills. Berry, a Spanish three student, opted to participate in Boomalang. "Boomalang forces me to only speak Spanish with a Native speaker so it helps me in my speaking and listening tests which helps me overall in Spanish,” Berry said. “It gives me a chance to interact with other cultures while building my comprehension skills."

Sitting in front of her computer screen French five student and senior Sophie Pellegrino has just finished a 30-minute conversation, in French, with a native speaker from Paris, France.

“It’s really cool that I get to talk to somebody who’s in a totally different country. I get to ask them about their lives and see their viewpoint on things and see what I have in common with them, even when they’re halfway around the world,” Pellegrino said. “I just think that languages are something that can cause a divide or barrier, and it’s cool to get to talk to people with no barriers; You get to just have a conversation with someone.”

After attending the American Council on the Teaching of Foreign Language Conference, Modern and Classical Language department chair Eileen Rodriguez-Kiser returned with an idea to increase fluency and cultural connections for students. There, Rodriguez-Kiser learned about Boomalang, a service that allows students to video chat with native speakers of other languages, specifically French, Spanish, Portuguese and English.

“Students want to connect and they want to connect now and with people in other cultures and other countries; this is the way students can do it, we are providing them with this opportunity,” Kiser said. “Boomalang is available, set-up, safe and you can have fun with it. [That makes it] a great way for students to do what they want to do: connect with people around the world.”

To bring the program to this school, Kiser had to meet with Principal Jeremy Mitchell to get the necessary funding.

“I was able to get some funding through my own budget and also through Dr. Mitchell. He supported our global initiative and it was something that could grow because German will be able to do it next year as well,” Rodriguez-Kiser said. “You pay on a ‘per-conversation’ basis and so I decided that for second semester we would aim for a pilot program and shoot for five conversations per volunteer student. Level five students would do it, not as a volunteer experience, but we would require them to do it.”

Once Rodriguez-Kiser had the go-ahead from the administration, students began video-chatting with native speakers, who act as language tutors, with high success. Students fill out a post-Boomalang Google form to provide feedback.

“Based on the students and how they’ve responded on the Google form, it’s been overwhelmingly positive of ‘oh my gosh! I feel so much more confident!’ and ‘I didn’t know I could do it!’ Overwhelmingly, it been very positive,” Rodriguez-Kiser said.

The program will be integrated into the German curriculum in the upcoming school year. Boomalang will give students an opportunity to speak with native German speakers outside of the two-week German exchange program.

“My students are always hearing German from me so they’ve gotten used to my accent and the words that I use rather than people from other countries or other [people’s accents],” German teacher Michael Kloster said. “[I’m excited to see] students who I think can really thrive. Students who give 150 percent will have this opportunity to see what they can do with the language. They’ll be more confident in speaking with native speakers.”

Kiser also hopes Boomalang will allow more students to earn their Seal of Biliteracy, an award given by a school district or state to a student who has reached proficiency in two or more languages by high school graduation.

“It’s going to help greatly build the proficiency level of every student, and that’s what I’m excited about because I would love for more students to be thinking about this with our Seal of Biliteracy,” Rodriguez-Kiser said. “[To earn] the seal of biliteracy you have to attain the intermediate speaking level. With experiences like Boomalang and speaking with native speakers, reaching the seal is doable.”

Reflecting on her time in the program, Pellegrino believes that having access to Boomalang as an underclassman would have also benefited her.

“It will benefit [younger students] in becoming more familiar with the culture and with becoming more comfortable in speaking. It’s a skill you need to develop and you can’t get better at speaking with people in another language unless you actually practice it,” Pellegrino said.