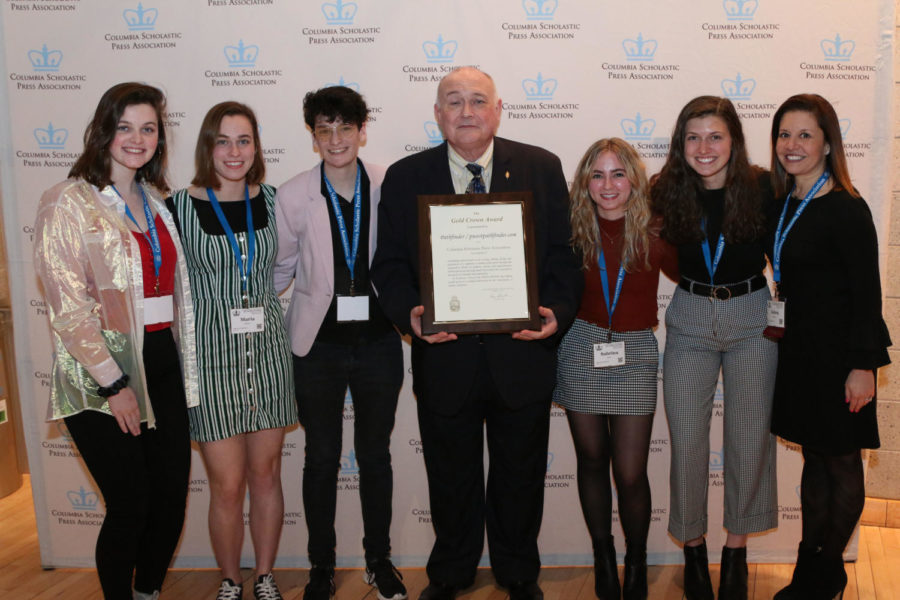 Pathfinder editors junior Lydia Roseman, seniors Maria Newton and Dani Fischer and juniors Sabrina Bohn and Emma Caplinger, along with Journalism Adviser Debra Klevens take a photo with Edmund J. Sullivan, the Executive Director of the Columbia Scholastic Press Association, after receiving a Gold Crown award. In 2018, the Pathfinder won a CSPA Silver Crown Award. “It was an incredible experience to be in a room with so many of the schools that we look up to and draw inspiration from,” senior and Managing Editor-in-Chief Dani Fischer said.

In a grand auditorium at Columbia University, five students sat waiting in the audience. A lone man on stage announced, “Pathfinder, Parkway West High School. Ballwin, Missouri: Gold Crown.” The students ascended the stage to accept their plaque as a camera snapped their photograph. The Columbia Scholastic Press Association (CSPA) awarded the Parkway West Pathfinder its first ever Gold Crown award, one of just four schools in the U.S. to receive this highly selective honor for the “Digital News” section.

“It was really cool to see that not only some of my stories had helped this happen, but as an editor, I got to work with the staff and help improve the newspaper,” junior and Deputy Managing Editor-In-Chief Sabrina Bohn said. “It was really cool to see that all our hard work had paid off, that we were improving and making a difference in our community. Although awards don’t mean everything, it was nice to be validated by this. It’s nice to say, ‘yes, our newspaper has a Gold Crown, and we deserve that.’”

The convention took place over spring break, where school publications such as digital and print newspapers, magazines and yearbooks were assessed on their design, photography, concept, coverage and writing. The conference also took an “overall excellence” approach to judging, which was performed by a panel of ten judges from all over the country.

“It was a lot smaller than I was expecting, but that offered a lot more intimacy than other journalism conferences,” senior and Managing Editor-in-Chief Dani Fischer said. “We got to talk to a lot of other publications about what they’re doing, and what they like about our site. We look to them for new ideas, so it was really cool to meet these people in person. There was, I think, the entirety of the Marjory Stoneman Douglas journalism staff there, so we got to interact with them and other schools that we admire.”

Fischer and Bohn primarily cite communication and dedication as what it took to achieve this, as well as a commitment to inspiring passion in new students, which is what has led the Pathfinder to be recognized internationally.

“I was interviewing a Parkway School board candidate and she was saying how she keeps up with the Pathfinder and follows us on Facebook. It’s really cool to see adults who don’t even have kids that go to West looking at our stories and being affected by them,” Bohn said.

Twenty years ago, when journalism teacher Debra Klevens started at West, the Pathfinder was a print newspaper. In 2012, Klevens began advising the Pathfinder as well as the school yearbook program, The Pawesehi. Now, it is a multi-award winning publication that posts multimedia content daily, in a time frame that keeps people engaged and interested.

“I’m humbled,” Klevens said. “For me, it’s about pushing students so they can excel. A lot of students work for the grade and not for the skill. My whole mindset is that you work for the skill and then the grade will follow. I want students to leave my room being better people, better storytellers, better at conversations and having better life skills that will take them into any career path they want to go.”