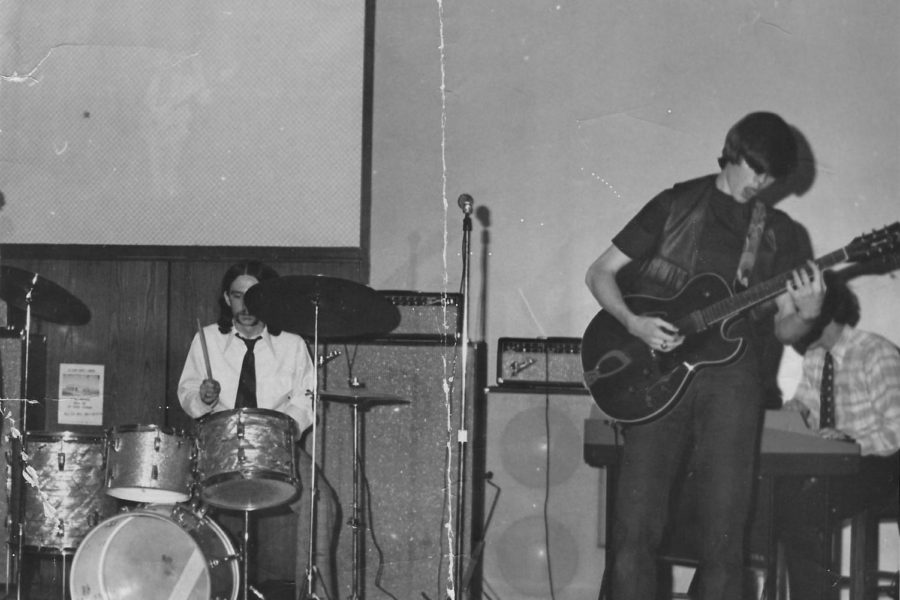 Alumnus Glen Leber performs the song “Down On Me” by Janis Joplin during the Letterman Dance in the cafeteria. He played the guitar, while his friend played the drums. “I never was good at dancing so performing was a perfect setting for me,” Leber said. “I enjoyed performing in front of an audience and knowing that while we were playing, they were having as much fun as we were.”

After attending Parkway Central from 1966-1968, alumnus Glen Leber transferred to Parkway West, and was a member of the first the class of 1969. During his senior year he became the lead guitarist for his newly-created band called The Factory Blues Band.

“It was always exciting to bring new people into the band to improve our sound,” Leber said. “As we sounded better as a group, we started to attract better players. Each additional player brought their own talents, and not only did they help us improve, but the overall sound changed from being a pure ‘rock’ band to being a ‘blues-rock’ band.”

Because there were not many resources for him to learn to play guitar and access to music was limited, he struggled to start the band. However, by listening to artists he liked and adapting to their ways of music, he improved.

“In 1969, recordings were all on vinyl records, so in order to pick out a guitar part on a song, you had to pick up the needle on the record player and put it down on the record [in the precise spot] over and over again. It was a very time consuming and often frustrating process,” Leber said. “Today, you can do this on a computer or other electronic devices easily. There are also a vast amount of how-to lessons and instructional material on YouTube that make learning guitar [and other instruments] much easier.”

The band spent a large amount of time practicing and preparing for their upcoming performances as a garageband outside of school.

“Playing in the band relieved stress during high school and still does today. Since I wasn’t involved in an athletic activity, playing guitar in a band was both a recreational and social activity for me,” Leber said. “Like sports, there is always something to work towards, both individually and together with the others in the group.”

Leber and his fellow band members started playing a variety of music, mainly rock and blues based off of American and British bands such as Janis Joplin, Canned Heat, John Mayall and Cream. They also wrote some of their own songs that were recorded at a local music studio.

“We had the opportunity to go into a local recording studio on two occasions to record some songs that we wrote,” Leber said. “Although it was a small studio [designed for low sound volume country music], it was exciting to experiment with our own songs and create something that was uniquely our own.”

Other than recording their music and practicing, the band played at a variety of different events like school dances. Specifically, they played at the Senior Superlative Dance, which was a dance that was sponsored by the Parkway West Lettermen, students who were involved in many events, particularly varsity sports. 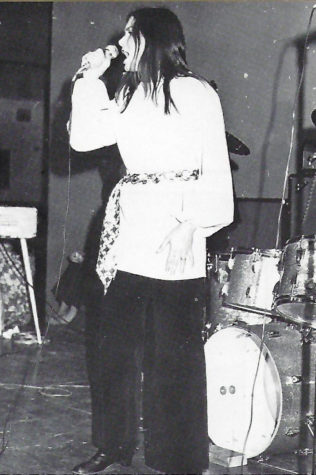 Glen Leber- 1969 Parkway West yearbookAlumnus Gail Mouser sings at the Letterman dance in the cafeteria. Mouser was the lead singer in Leber’s band.

“We also played for private parties, church dances and under 21 clubs around the St. Louis area and parts of Illinois,” Leber said. “We took any opportunity we could to perform and often played for free. The last couple of times we performed together in public was the Senior Superlative Dance and at a music festival on the Washington University campus.”

More than just playing an instrument, being in the band gave Leber opportunities to make strong relationships with his band mates.

“I really enjoyed playing with the other people in our band. We became close friends and looked forward to getting together, learning songs by some of our favorite artists and experimenting with our own sound,” Leber said. “We learned to improvise by playing blues and got more and more creative the longer we were together.”

Being a lead part of the band changed Leber in many ways, from his confidence to his creativity. Although he currently is not a musician, he still has the same love for music

“The band gave me a sense of identity, direction and belonging. It helped me build my self-confidence and taught me to work creatively with other musicians,” Leber said. “Since this was my first band, it laid the foundation for becoming a professional musician after high school.”

Due to all the work he put in practicing and performing in his band, Leber learned lessons about working with other musicians and playing music.

“Decide what you want to do with your music and make sure everyone in the group is on the same page. Also, try to keep egos under control. The most common reason for a band to break up is personality issues between one or more members,” Leber said. “Playing a musical instrument is like any activity that requires skill: the more you play, the better you get. Reach out and play with as many other musicians as you can. Don’t be afraid to try new and different types of music.”

From practicing with his friends in a garage to performing in front of huge audiences, Leber had a high school experience full of music, and he is grateful for his opportunities.

“Looking back, Parkway West was, and still is, a great high school that prepared me for going on to college,” Leber said. “The school was brand new in 1968, and everything was brand new. It was fun to be part of all of the firsts associated with being part of the first West graduating class. I am fortunate to have had the opportunity to attend a top notch school.”