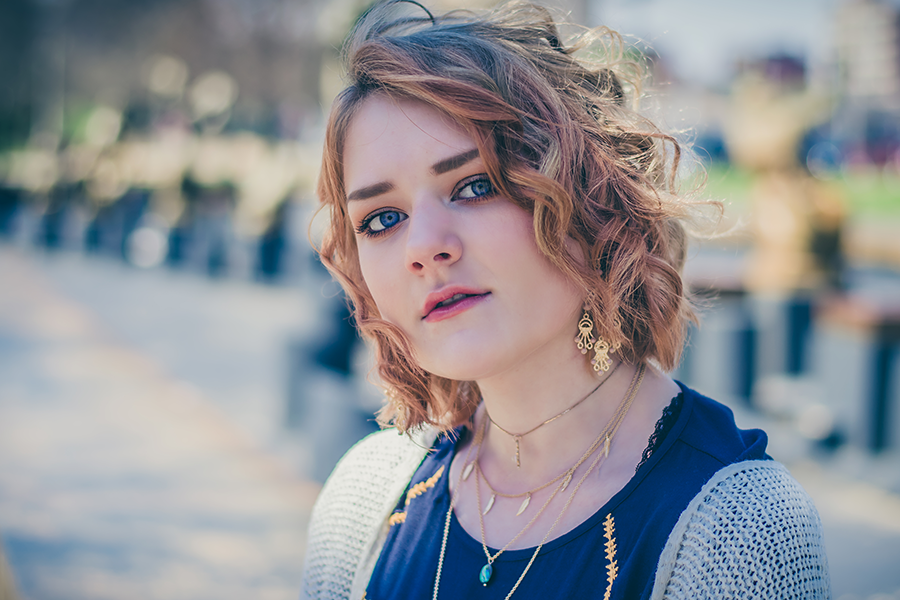 The late alumna Mackenzie Naylor poses for a portrait while working with Local Ambition modeling. Mackenzie graduated in 2017. “With her award-winning smile, sparkling diamond blue eyes, witty dry humor, loyalty to a fault and calming ways it is easy to see why anyone who met Mackenzie instantly fell in love,” Mackenzie’s mother Janet Johnson said. “She was an old soul for such a young woman and a complete throwback which made you love her even more.”

On Dec. 26 the community lost 2017 alumnus Mackenzie Naylor. Mackenzie was born Dec. 1, 1998, and was a prominent art student as well as a model for Local Ambition, who made their own memorial video for Mackenzie.

Mackenzie was known for being genuine and never changing herself to please others.

“Mackenzie was always unapologetically herself,” Ceramics teacher Ashley Drissell said. “She was always Mackenzie. She was very real and I admired that about her; it reminded me of me.”

Drissell posted a photo of Mackenzie next to the ceramics glazes along with a key that Mackenzie made of which glazes mix well together, after extensive experimenting she did to determine which glazes reacted well with each other. Mackenzie’s creations earned her a First Place for Ceramics at the Lindenwood High School Art Show in 2017.

“She was probably the best wheel-thrower I’ve ever had, which is saying a lot,” Drissell said. “She was a really hard-working person. I [am glad] I had the privilege of working with her.”

She was also extremely kind, which fostered her relationship with Drissell.

“I was very pregnant with my daughter [when Mackenzie was my student] and she made a point to come up to me in between her classes multiple times a day just to check on me and make sure I was okay,” Drissell said. “She would also get really mad at me if I was loading or unloading a kiln: ‘Mrs. Drissell you’re not supposed to be doing that!’ So she would do it for me. Sometimes I would get here in the morning and she had already unloaded it. She really took care of me.”

In addition to being a student, model, family member and friend, Mackenzie also suffered from heroin addiction. Her mother hopes that her passing will inspire others to take the disease of addiction more seriously and talk more openly.

“We must be open about the need for honesty [when it comes to] this disease. [Awareness] should be spread by informing and educating people,” Mackenzie’s mother Janet Johnson said. “To the person who doesn’t understand addiction she is just another statistic who chose to make a bad decision. A very uneducated statement indeed, but nonetheless that is what they will say.”

Mackenzie’s substance abuse began early last year with methylamphetamines and escalated to heroin in the summer. She fought against her addiction and attended rehabilitation.

“It has been a long, hard, agonizing battle for the last year and [Mackenzie] fought like a warrior every step of the way. Addiction, however, won the war,” Johnson said. “She worked hard and fought the good fight, finding that sobriety was a much better way to live, but the demon was still there.”

Johnson wants her daughter’s story to save lives by raising awareness or serving as a wake-up call to other substance abusers. She wants to fight against the negative stigmas that surround drug addiction by letting people get to know her daughter.

“I have spoken to many people Mackenzie has touched through rehab,” Johnson said. “[I’ve heard] countless stories on the how she made an impact, what a motivation she was and how they now fight as hard to stay clean because of her.”

Mackenzie’s life was one of 948,000 affected by heroin addiction in the United States. Johnson wants people to realize that addicts are people, too, with mothers and families just like everyone else.

“So, maybe we should all remember, whatever state they’re in today, there is a mom somewhere, with knees bleeding from prayers, that just wants her baby back. Maybe instead of judging, we say a prayer. Maybe we become a bit more educated and help raise funds to help recovery facilities become more successful. Maybe we contact our lawmakers and request more useful laws concerning addiction, concerning rehab facilities and concerning what happens when they are incarcerated. We are losing an entire generation to this horrible disease. Maybe we use compassion instead of disdain,” Johnson said. “Maybe we try to remember that every meth or heroin addict is someone’s child.”