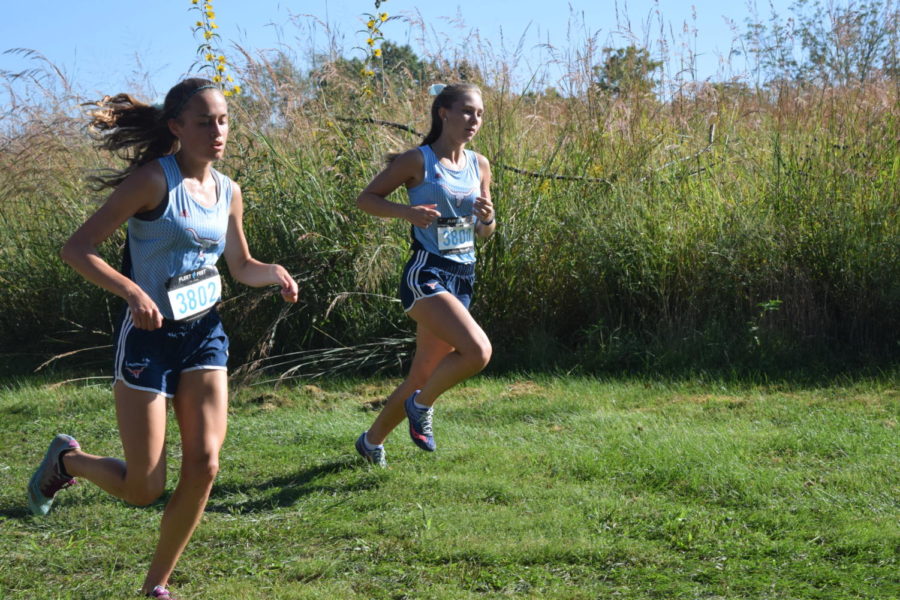 Pacing together, sophomores Leach Selm and Emily Sipp compete at the Paul Enke Invitational at Sioux Passage Sept. 15. Sipp and Selm have both qualified to compete with the state team. "Even if you're having a bad day, the team is always there for you," Selm said. "That's what I love about this sport."

“I’m just one of those people [who performs better] when I have a lot of pressure on myself,” Selm said. “It [makes] me feel like I have to do better.”

The team is hoping to medal at state this year by finishing within the top four. Additionally, they are hoping to have as many All-State competitors as possible, which means having girls finishing in the top 25 individually.

“It’s always really hard to tell how we’re going to do at state,” Smout said. “I think we did have a shot at winning [last year] or at least placing higher than we did. We were undefeated, but then we got sixth at state. I think that surprised a lot of us.”

To improve their performance, coaches Charlie Cutelli, Brittany Hess and Brent Wildhaber started to make the team rest later in the season. One concern about last year was that the girls were over-rested for state because they had decreased their workload to feel fresh at sectionals the week prior.

“Last year, everyone had really good races at sectionals, but then not at state,” Smout said. “I think [by the time state came last year] our bodies forgot how to work hard.”

Smout is optimistic about the new training and resting method.

“I think [this method] will feel better,” Smout said. “Because if we know we can run fast while still training hard [like we did at sectionals this year], then we’ll run fast this weekend [for state].”

The girls are also working on racing smart.

“The atmosphere is just really different at state; people tend to go out really fast,” Smout said. “We’ve been working more on finding a rhythm as a team and thinking more as competitors rather than [focusing on splits].”

The team is undefeated with the exception of conference, where they placed third. But, this high-performing team is not without its setbacks.

“Personally, I have faced a couple of challenges,” Caplinger said. “About halfway into the season, I had a stress reaction, which is the step before a stress fracture, in my hip. I had to take four weeks off. It was not the season I was expecting.”

However, Caplinger is not bitter about her injury.

“Honestly, I feel like it made me stronger as a runner,” Caplinger said. “I wasn’t just [sitting around]. I had to bike a lot [and do] hill workouts with Cutelli; I was swimming with the boys swim team and I was down in the cardio room. It worked out really well and I think it taught me a lot mentally about being resilient and pursuing your goals.”

As a whole, the team feels that they have been doing well and are ready to compete.

“We just need to remember not to let the pressure get to us,” Smout said. “If we run how we have been running all season, we should do fine.”