Boys’ swim and dive team fights for success at state 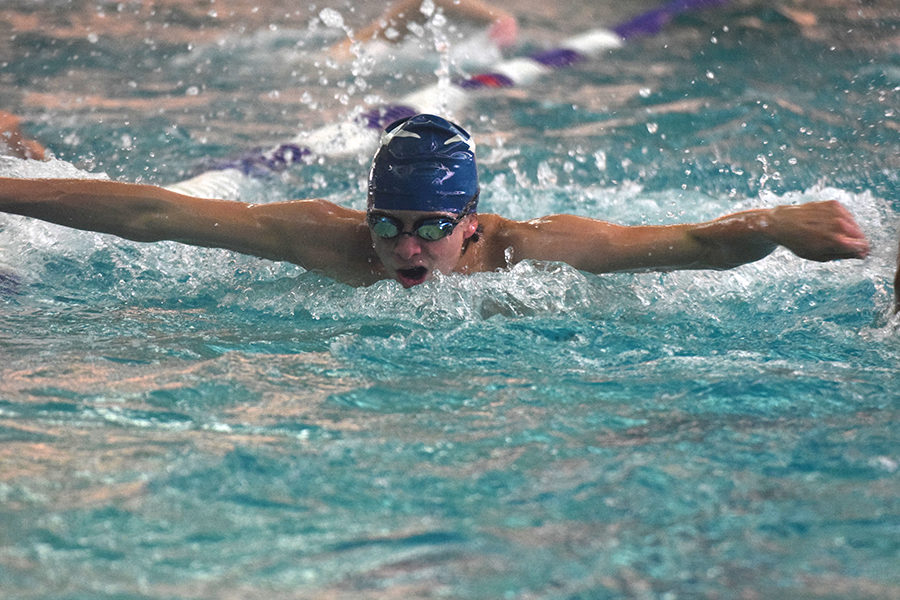 Freshmen Joey Sloan performs butterfly on Sept. 6 at his Ladue meet. The team won this meet with an overall score of 118 to 68. “My favorite part about being on the swim team is hanging out with the friends that I have made,” Sloan said. “We have all become really close so I am not looking forward for the season to end.”

Practicing six days a week with three morning practices, the boys’ swim and dive team prepares for the state championship in hopes of improving from their fifth-place finish in 2017 to top three.

“We have a very diversely talented team,” assistant coach Mary Beth Wilson said. “We are able to qualify [in] a vast number of events, which makes us a team to look out for now and in the coming years. We are hoping for top three this year.”

The team gained a strong freshmen class including Will Bonnett, Raymon Yoon and Joshua Wu to compensate for a slew of departures headlined by alumnus Alec Zhou, who placed 12th and 16th in the 100-yard breaststroke and 50-yard freestyle respectively at last years’ state championship meet.

“Will [Bonnett] always helps push me to go my best times in meets even if the other team is a lot slower than us,” sophomore Carter Murawski said. “He is also a hard worker in practice by keeping up with the upperclassmen and is a strong swimmer in many events.”

The team also underwent a change in coaching. Wilson, whose résumé includes coaching experience at Parkway North, MICDS and summer league officiating arrived to coach Parkway West. Coleen Sumner, an assistant coach for the 2017 team, was promoted to head coach this year.

“It has been so much better from last year coaching-wise, so that’s why I think we are a stronger team this year,” Murawski said. “[Sumner] gives us challenging practices that we can train with and it really helps us in the long run.”

One aspect of the team’s new coaching regimen entails Sumner putting mottos on their board each Monday to encourage the swimmers.

“The quotes ensure that we all stay focused on our goals,” Murawski said. “They remind everyone about why we have to focus and push hard in practice so that we can see the results we want in the meets.”

With 12 swimmers already receiving state cut times, the team has punched numerous tickets to state. Such as, Bonnett has already qualified for state in the 500-yard freestyle, the 400-yard freestyle relay and the 200-yard medley relay. The team is anticipating an abundance of success at state, which starts Nov. 9, but also has started to feel the pressure to perform.

“I feel pressure for state, mostly because I want to do my best,” Bonnett said. “The pressure helps me push myself during practice when a certain set we have to swim really sucks, but it also gives me a feeling of uncertainty in my stomach right before the race.”

Despite the pressure, the team is optimistic about achieving their goals at state.

“State is an opportunity for me to represent the school and my team while also achieving all of our personal goals,” Murawski said. “If we would win state I think our team would gain more confidence in the speed of our team and the motivation to maintain our place next year.”