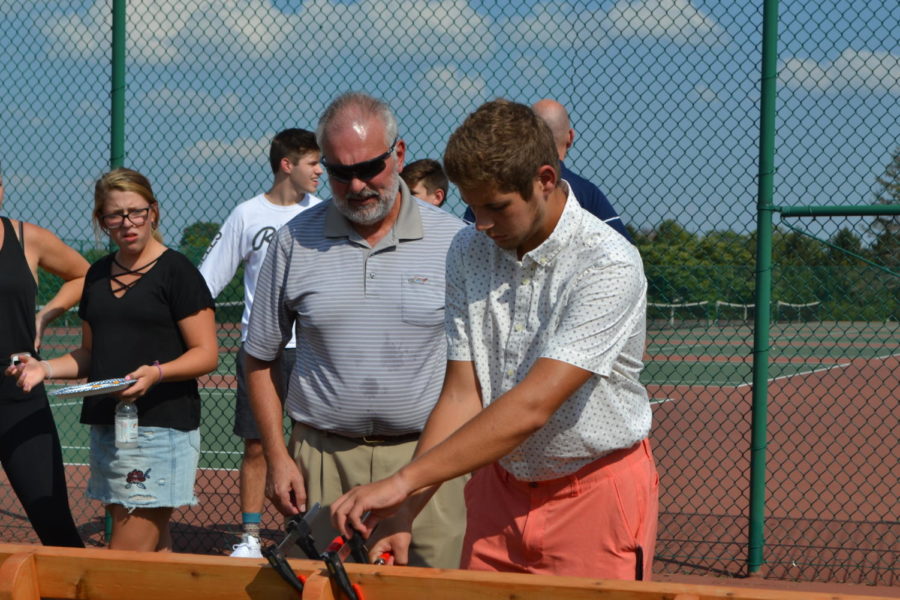 With his father watching, junior Matthew Hopper attaches a plaque to his bench commemorating the life of Brynn Haun at the senior night ceremony for the girls’ tennis team Sept. 20. Hopper chose to create the bench for his Eagle Scout Service Project. “I’ve learned a bunch of stuff from Boy Scouts,” Hopper said. “From living out in the wilderness by yourself to being a better leader, helping younger people, helping older people, just being a better person, you learn life skills.”

Junior Matthew Hopper paid tribute to his late friend he knew since elementary school by constructing a bench outside the tennis courts in Brynn Haun’s memory.

As Hopper searched for potential Eagle Scout Service Project ideas, tennis coach Katelyn McCreary approached him last spring to gauge his interest in dedicating a bench to Haun, who competed on the team as a freshman.

“We always knew we wanted to do something special for Brynn and her family because she had such a positive impact on our tennis community. We wanted to have her memory live on at the tennis courts,” McCreary said. “For the team, it’s a way to reflect on their relationship with Brynn and help them still grieve the loss because it’s still hard for a lot of those kids. It’s kind of a way of therapy for them.”

Building the bench also served as Hopper’s own method for continuing Haun’s legacy.

“It was important to me because I just wanted to give back to a community that was hurting,” Hopper said. “Brynn had given so much to the community from always being supportive, nice and so positive, even when she was going through her toughest times. I wanted to give back.”

Between the rigor of gathering materials, staining the bench and transporting it onto campus, Hopper enlisted the help of Haun’s other friends, including junior Andrew Jolly.

“Brynn was one of my best friends. We were always growing closer every time we hung out,” Jolly said. “I think it’s important to honor her because she brought so much to the school that I think a lot of people can take away from. She was a very positive person and would never let anything get her down, especially being in the hospital. I think it’s a lesson we should all learn.”

The project culminated in a ceremony prior to the girls’ tennis senior night match Sept. 20, where Hopper attached a plaque with an inscription of the same quote displayed at Haun’s memorial service.

“Teams and community members first off say how beautiful the bench is, and then they ask about it. There’s a plaque that has Brynn’s quote on it, and that starts the conversation,” McCreary said. “Not only has Brynn impacted our community and people that knew her firsthand, but also people that never knew her but know her view on life, which was ‘enjoy every moment and appreciate all the things that you have.’ That’s who she was, she always loved life. It’s cool that she’s still impacting people even though she’s not still here physically, but she’s still here in all of our minds and hearts.”

After fulfilling his commitment to create the bench, Hopper cherishes the opportunities to connect with loved ones that his work provided.

“Whenever you saw [Haun] in the hallways, she always had a smile and was always happy no matter what was going on in her life. She always put other people first,” Hopper said. “My favorite part [of the project] was just getting everyone together, spending time with people and reflecting on how much Brynn meant to everyone and the good impact she had on everyone.”