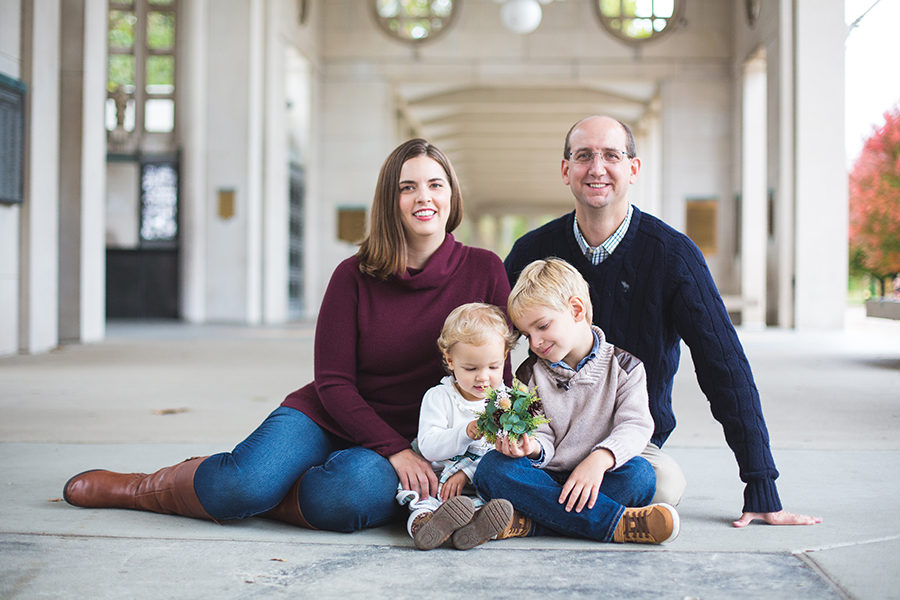 James Bosanquet sits with his wife Jill, his son Grant and his daughter Clara at the Muny entrance for a family picture. Grant and Clara are both future longhorns and Jill currently a family physician practicing weight loss medicine. “As a critical care physician, we work some long, yet predictable hours. I could not ask for a more supportive family, " Bosanquet said. "My wife, Jill, is the rock of our family and keeps everything scheduled, planned and moving forward."

Since graduating in 2001, alumnus James Bosanquet has pursued a career as a Critical Care Physician at Missouri Baptist Medical Center, and has been practicing critical care medicine since July 2015.

“I am an intensivist. I round in the Intensive Care Unit (ICU) on my group of eight to 15 patients. I discuss the plan with the nurses and ancillary staff and then enter orders and write the daily progress notes. Throughout the day, I am expected to admit new patients to the ICU and oversee critical events on the regular hospital units,” Bosanquet said. “I place breathing tubes for patients who need them, insert lines in arteries or veins to help deliver medicine and other procedures as needed. My duties also include updating patients and family members on their loved one’s progress.”

Prior to practicing critical care medicine at Missouri Baptist Medical Center, Bosanquet was a Pulmonary and Critical Care Fellow at Barnes-Jewish Hospital from June 2012 until June 2015.

“During my fellowship, I worked weekends at Missouri Baptist. It was obvious that it was a tertiary care center with a community feel. Growing up, my pediatrician was actually at Missouri Baptist. I also wanted to practice in the community that I live. I have taken care of many family members of classmates from my Parkway West days,” Bosanquet said.

Working as a Pulmonary and Critical Care Fellow served as an extension of Bosanquet’s medical training.

“Those three years provided the additional education I needed to become a Critical Care/Pulmonary specialist. I practiced medicine during this time but always had an attending physician to oversee my patient care,” Bosanquet said.

To eventually become a Critical Care Physician, Bosanquet had to complete 14 years of training and education after high school.

Growing up, Bosanquet always knew that the medical field was where he wanted to flourish.

“Medicine was the right mix of science, math and humanity. My mother was a nurse and I was always drawn to healthcare. In middle school, I knew that I was striving to be a doctor,” Bosanquet said.

“I was always interested in physics, biology and physiology, all of which are integral in critical care. Critical care is continuous problem solving and each day remains interesting,” Bosanquet said.

According to Bosanquet, some of his greatest accomplishments as a Critical Care Physician include seeing patients survive, one recent case involving a young mother with two children.

“The young mother had a postpartum hemorrhage. She was in disseminated intravascular coagulation and literally bleeding to death. I feared we would lose her,” Bosanquet said. “Our team worked on her over an hour with rapid transfusion devices, placed her on a breathing machine and placed IV access and she was 100 percent better the next morning.”

Moving forward, Bosanquet hopes to continue to push the boundaries of medicine.

“We are looking to bring new methods of cardiac and pulmonary support to Missouri Baptist that should help us save even more lives,” Bosanquet said.

Attending West allowed Bosanquet to push himself to achieve his goals and dreams.

“I hope that all Parkway West students realize that doors are there to be opened,” Bosanquet said. “You have the world in front of you; Parkway West is just the beginning.”