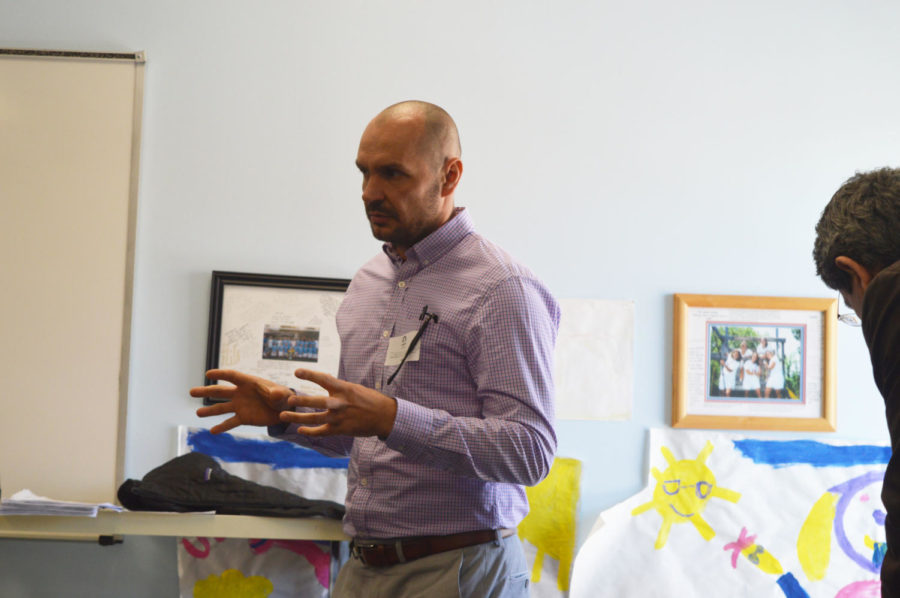 Explaining history while describing his own culture, Dennis Nasufovic speaks to social studies teacher Jim Hermann’s class. Nasufovic immigrated to St. Louis with his family in the 1990s where there is a current large Bosnian population. “If you have a neighbor who is very loud watching the soccer game with a broken TV set outside, you know its a Bosnian whose team lost,” Nasufovic said.

“The idea [to speak to students] maybe came up about a month or so ago, and I was asked to talk about this and I said why not, this is an important part of my history,” Nasufovic said.

Nasufovic explained to students in a presentation how conflict emerged in the European nation of Yugoslavia, which at the time was divided into provinces. These provinces were Slovenia, Croatia, Montenegro, Kosovo, Macedonia and Bosnia, but were ultimately overseen by Serbia.

“Very poor economic situations led to dissatisfaction among the provinces, and they decided they wanted to split,” Nasufovic said.

Slovenia was the first province to gain its independence, and as other provinces attempted to follow, Serbian troops intervened as a form of prevention.

“Bosnia was the bloodiest war of all of the wars that took place. I was in an area occupied by Serb troops, and they either wanted us killed or expelled,” Nasufovic said. “100,000 people got killed and 2 million people were displaced.”

Given the options of Australia, Canada and the United States, Nasufovic and his family ultimately found home in St. Louis. His daughter, sophomore Tasneem Nasufovic, is the family’s first generation American.

“St. Louis was attractive because of the housing market at the time,” D. Nasufovic said. “In St. Louis, we have about 60,000 people living here from Bosnia.”

“I didn’t know Tasneem too personally since she is new this year, so it was really cool learning more about her and her culture,” sophomore Jason Reilly said.

As D. Nasufovic called attention to the large Bosnian population in St. Louis, students such as sophomore Campbell Stewart found a better understanding of Bosnian culture in the area.

“I knew there were Bosnians in St. Louis, but I had never known why,” Stewart said. “It was interesting to hear how he ended up in St. Louis and why other people decided to come, as well as how the community is all there for each other and practice their culture.”

As AP European History students begin to learn about Eastern European crises in their curriculum, senior Betsy Wait found D. Nasufovic’s knowledge and explanations beneficial to further her and her classmates’ historical understandings.

“It’s really easy to get caught up in the terminology of everything we’re reading, but to put names to faces that we read about is super impactful and makes what we read come to life,” Wait said. “It helps us to keep in mind that these were real experiences and real people.”

Coming from a family of first-generation immigrants, sophomore Reema Alhachami also recognizes the importance of learning from first-hand experiences.

“Some people haven’t had the chance to meet someone from a war background and I found it personally interesting because my parents were war refugees too in the war of Iraq,” Alhachami said. “Bringing attention to the stories of different people just creates more understanding.”

Hermann acknowledges students’ content and enthusiasm regarding Nasufovic and hopes to continue bringing in speakers for the future.

“I thought he was amazing, his sense of humor was terrific. My only regret was that he didn’t have a longer amount of time to talk,” Hermann said. “I think it would be an amazing thing for people who have world experiences to talk to our entire student body.”

Reilly agrees that broadening conversations and opportunities regarding culture should continue to be embraced in the classroom environment.

“I think learning about our classmate’s cultures is important to growing as students, but also as people,” Reilly said. “Now, in the real world we will make better connections with others we meet along the way.”