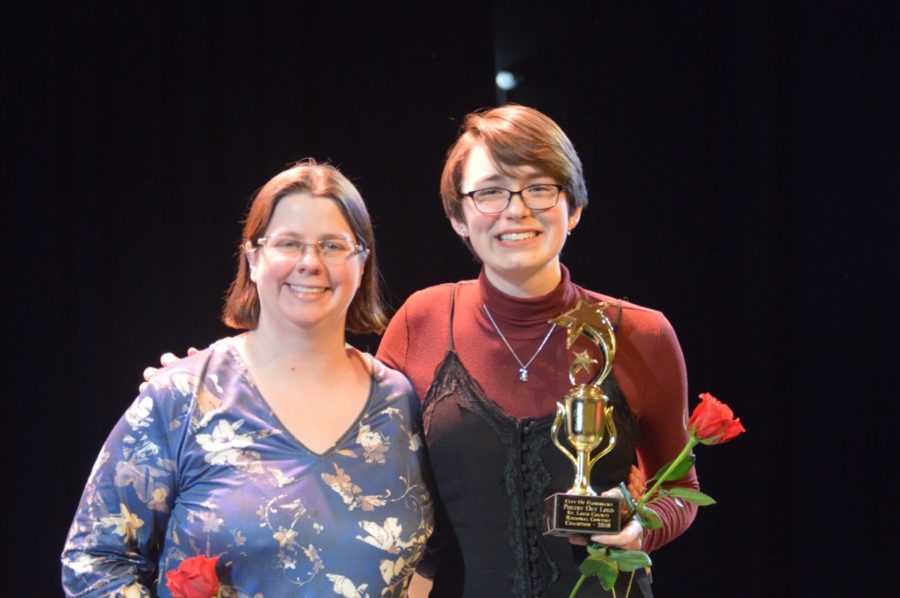 Senior Ann Truka and English teacher Andria Benmuvhar pose with roses and the Regional Poetry Out Loud Champion trophy. Truka has competed in Poetry Out Loud for four years in a row. “I was thrilled that Ann first won the school competition because she had won previously as a freshman. It felt like a nice bookend experience. The regional competition was very tight—everyone gave incredibly strong performances—so when Ann won I was very excited and proud of her,” Benmuvhar said.

After four years of competing in Poetry Out Loud [POL], senior Ann Truka placed first in the St. Louis Regional Competition and has qualified to perform at the state competition in Jefferson City, Mo. March 8.

“I was really hoping to win the school competition this year because I thought it’d be cool to win again as a senior,” Truka said. “At regionals, I was just hoping to place. Everyone else was really good, and when I ended up winning, I was so surprised. I really didn’t expect it at all.”

Participants are expected to perform three poems to a panel of judges who evaluate students on physical presence, voice and articulation, dramatic appropriateness and evidence of understanding.

“The judges for this region are Pamela Geppert, Shug Goodlow and Noelle Jones, [who are] all poetry lovers and were educators at some time during their active careers. [They] evaluated the contestants on three rounds of poetry recitation using rigorous criteria,” Poetry Out Loud St. Louis Regional Coordinator Nancy Crouse said. “Scores were instantly tabulated by theatre manager Sean Robertson and Jeanie Robertson to determine the winner.”

Students must choose their poems from the official Poetry Out Loud website, where there are more than 700 options, including internationally known poets like Shakespeare and Frost, as well as modern day writers.

“The poems I performed at regionals were ‘April Midnight’ by Arthur Symons, ‘After the War’ by Rachel Galvin and ‘The Bad Old Days’ by Kenneth Rexroth. It was intimidating watching the winners from other schools perform, but I felt proud of the work I did,” Truka said.

“We spend time breaking down poetry, focusing mainly on the speaker and their tone in order to embody the spirit of the poem while reciting. We then have an in-class recitation of the poetry in November,” Benmuvhar said. “It makes the normal class routine much more authentic—you have a purpose to analyze the poem now. Additionally, the act of memorizing and standing up to recite builds confidence in students and provides a lasting memory.”

Because she won first place in the St. Louis Regional competition, Truka will have an all-expenses paid trip to Jefferson City, Mo. March 8, where she will compete against eight other students to be named the Missouri State Champion. If she wins again, Truka will be on her way to Washington D.C. for the final competition in April.

“I’m a little nervous, but I feel like that’s normal for something like this,” Truka said. “I’m also excited because the night before the competition, I get to have dinner with other contestants and Missouri legislators, which I think is pretty cool.”

In 2017, more than 5,000 students and 200 teachers from Missouri schools participated in POL. This year, Truka was one of eight students who won their school contests, which involved 96 teachers and 1,550 students in St. Louis County alone.

“Every student should definitely try [POL]. You gain an appreciation for what language can do, both for the reciters and the audience, that you wouldn’t get from just looking at poems on a page,” Benmuvhar said. “Poetry comes alive through the recitation, which is such an empowering thing.”