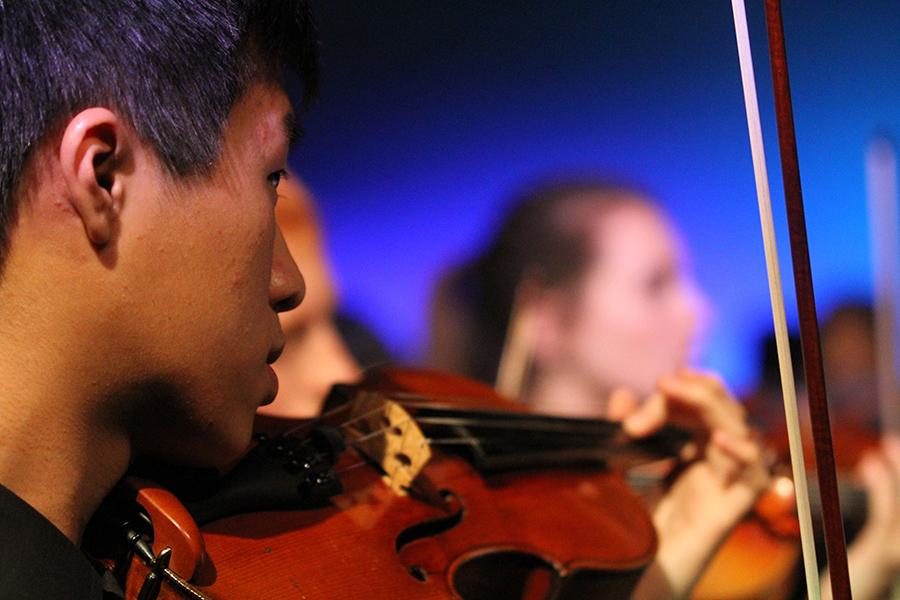 With a violin cradled in his arms, junior Jason Wan performs at a fall orchestra concert. Wan, who practices violin for roughly an hour a day, was selected to participate in the All-State orchestra at the Missouri Music Educators Association (MMEA) conference. “Every year you go to Mizzou and there’s a lot of people that audition so you have to stay there for a couple hours,” Wan said. “[At the conference] you rehearse for six to eight hours a day and then you perform on the last day. Some people practice their music before they get there.”

In order to attend, students first had to qualify through a rigorous, highly-selective audition process for the All-State band, jazz band, orchestra or choir. With fewer than 200 singers from across Missouri’s 11 regional districts earning All-State choir honors, the high-stakes nature of auditions fostered a sense of apprehension that was foreign to Bang.

“Auditions for All-State was nerve wracking emotionally. I usually never get really nervous for auditions because I did different competitions and auditions before that,” Bang said. “This was the very first time when I actually felt I was shaking. I felt like my voice wasn’t ready. I actually thought I wouldn’t make it because I had a few voice cracks in the song.”

No stranger to the spectacle of All-State auditions was Allendorph, an oboist since fifth grade who was named first chair. Even after being accepted into the band in 2017 as well, her tryout this year did not transpire the way she originally anticipated.

“I remember my first year I made [the All-State band] last year, I was in shock. I didn’t expect to make it. This year I was hoping that I would make first [chair] because I was third in the state last year,” Allendorph said. “When I found out that I was first, I was definitely surprised. The audition for the final callbacks have been a little bit odd. Some of the sightreading stuff they had us do was really hard and super high up on the instrument. No one who did the audition actually felt super comfortable with it, but I was definitely really happy when I made first.”

Also making the trip to the MMEA conference was band teacher Brad Wallace, who relished the opportunity to observe the All-State band in action.

“The ensembles and the other bands I heard were fantastic. Just different ideas, maybe how they had their ensembles seated. Maybe they have their trumpets on this side or this side, just little ideas like that. Maybe they played a piece of music that I would like to play with the band here,” Wallace said. “It’s a great opportunity to collaborate with other teachers as well while I’m there and hear what they’re doing and come up with ideas to make our program better.”

Although students had already displayed their musical prowess at auditions to assert themselves as All-State caliber, there was still work to be done. The conference culminated with performances from each of the groups. Despite limited preparation time–with some rehearsals lasting 10 hours–Bang attributed the productivity of the choir to its collective enthusiasm.

“Everyone who was [at the conference] was really passionate about music. In class, not everyone shares the same passion that you do, but there everyone had the same love for music,” Bang said. “Even when we were out of practice, we were all singing together. I call it ‘choir nerding.’ We would sit in this quiet room after a three hour rehearsal and just sing ‘Bohemian Rhapsody’ on five part harmony. It was pretty cool.”

For Allendorph, the benefits of not only the conference but the music department as a whole were twofold. She says she has grown as a person both with and without an instrument in her hands.

“I find it a lot easier to connect with people and to talk to them at these sorts of things because we all want to be there. I think the main thing it’s taught me is that you have to find what you want to do in life and it has to be something you love, especially if it’s something that takes a lot of work,” Allendorph said. “It’s definitely taught me a lot about hard work and dedication. If you don’t work hard at something, you’re never going to get any better and you’re never going to improve.”

Junior Jason Wan, a violinist since he was five years old, expressed similar sentiments regarding the All-State orchestra. He lauds the sense of community that orchestra has created for aspiring musicians hailing from every corner of Missouri.

“This year was my third year [auditioning] so it was pretty normal. I already knew a lot of [the orchestra players] because I’m in the St. Louis Youth Symphony. A lot of the people there are from that symphony. There’s also some people from the Kansas City side and some people from Columbia.” Wan said. “Violin has taught me how to improve at something. You have to be really self-critical. If you’re stubborn or too prideful of yourself, you won’t progress anywhere.

Wallace, meanwhile, sees the All-State accolades as proof that the future of the band program and music department is bright.

“Gwyn when she went last year was the first band student in a long time to go for many, many years. It is pretty rare,” Wallace said. “It sets an example for what’s possible if the kids really dedicate themselves and push to be the best. It sets the bar really high and lets other students and parents and teachers know that there is a really high level that’s attainable.”