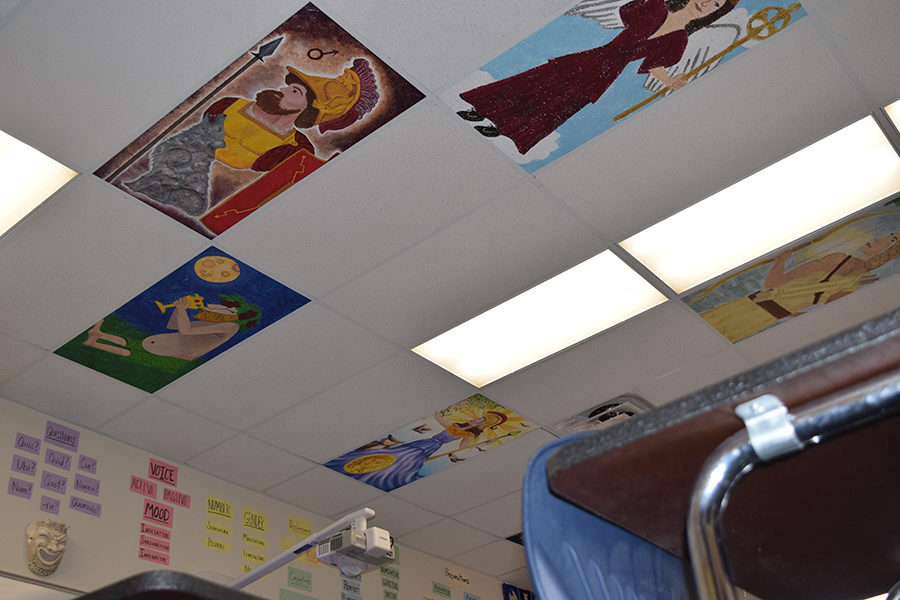 Twelve tiles currently line Herpel’s ceiling, and six more are in progress. Herpel provides resources for students to carry out the detailed research in depicting the deity of their choosing. “I’ve always liked the myth surrounding Proserpina. Also, knowing that it would take an obscene amount of time for me, a serial procrastinator, to complete, I figured that Proserpina wasn’t one that a lot of other people would ask to do,” junior Natan Shpringman said.

Along with a mural of the Roman forum on the wall, student-painted ceiling tiles join the collage of decorations hanging from Latin teacher Tom Herpel’s walls. The tiles that depict ancient Roman deities are an ongoing project in Herpel’s collection of handmade classroom decorations.

“I had a meeting at [West Middle School], and I was walking through the hallway and I saw that they had some of the tiles painted, on the ceiling, and I think they were books. I thought that it would be awesome to have ceiling tiles that were painted within my class, so I started thinking, ‘Oh, it would be awesome to look up to the skies, like looking up into the heavens, and have Roman gods and goddesses there,’” Herpel said.

He wanted students to create the project, and began consulting artists in his classes about the idea.

“I was one of the first ones to do it, and I hadn’t really painted anything that big before, so I was nervous but at the same time I thought, ‘Oh it can’t be that bad,’” senior Ellie Joyce said. “At first when we went to Italy for the Latin trip, I was looking at all the statues, and I knew I was going to do Athena, so I was taking pictures of everything that had her in it.”

Once the artist’s design is approved on paper, Herpel gives them a ceiling tile and a semester to bring the deity to life.

“The texture is certainly something to get used to; the tile’s covered in tiny holes and is pretty rough. I was originally planning to sketch out my painting on the tile with pencil, but that proved to be basically impossible. I’m also used to working with more expensive paint, like oil, but that doesn’t really work on a project like this, so I bought a bunch of bottles of cheap craft paint from Michael’s. With paint like that, a lot of layering is involved, and you have to get kind of creative with your blending,” junior Natan Shpringman said.

With deliberate, historically informed choices, the 12 current ceiling tiles have not only added another layer of decoration to Herpel’s classroom, but also helped heighten students’ educational experiences.

“I’m trying to space them out but ideally I’d have all the tiles filled, it might take a few years, but that’s the goal. For certain lessons I’ve definitely pointed up to the tiles, and shown them what I’m talking about, since a lot of them are made with specific iconography and symbols that go along with the god or goddess,” Herpel said. “Some artists are better than others, but I think that just goes to show the variety of student and artistic expression that we have here at school. It’s nice, it’s embracing everyone’s talents.”