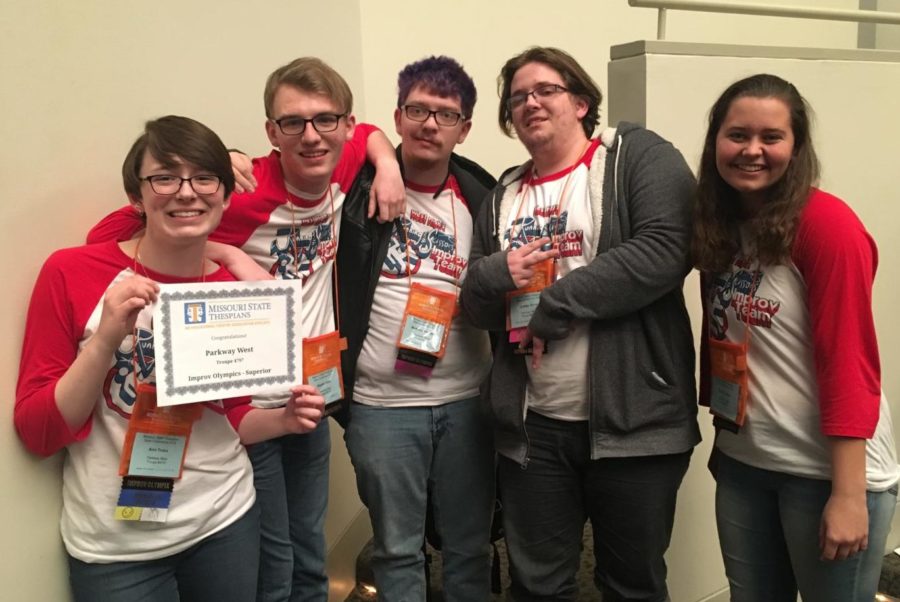 Wearing their “Running with Scissors” shirts, students from the improv team pose with the superior award they received, which is the highest rating. They were one of two groups in Missouri to receive this award for the Improv Olympix event. “We had a senior who was doing scholarship auditions, and four juniors who were busy too. We weren’t really expecting to do as well as we did,” Showers said.

Students in the International Thespian Society (ITS) attended the Missouri State Thespian Conference Jan. 11-13 at the Marriott St. Louis Grand to go to classes, talk to colleges and perform in individual and group events.

“It’s a conference where a bunch of thespians from Missouri meet to do workshops together, learn how to become better at their craft, bond and meet new people from other schools [and] cities from all over the state,” junior Matt Showers said. “It’s just a lot of fun and a great experience.”

The conference included group competitions such as the Technical Challenge, in which junior MJ Stricker and seniors Kalyn Neuwirth-Deutsch, Kim Clyne, Sophie Spaulding and Eric Hintz had to fix or change parts of a theater set as quick as they could. Another event was the Improv Olympix, where senior Ann Truka and juniors Carson Lolley and Hayden Riehl played an improv game alongside Showers. Facing off other schools from around the state, West students pulled through and came out on top.

“We got a superior rating for the Improv Olympix, which is the best rating you can get. We were one of two schools in the state to do that,” Showers said. “It felt good. We also won the Tech Challenge, and that’s the first time I think we’ve ever won that, so it was great.”

Through classes and performing, students were able to become better at what they do, whether they are on stage or behind the scenes. Showers’ felt he was able to hone in on his approach to improvisation through his participation.

“Performing at the conference is probably going to make me think about how to structure an improv scene more than just going out there and being like, ‘oh my one goal is to be funny,’” Showers said. “It’s gonna make me think more about how I’m gonna go out there and tell a story, instead of making one-liners that are going to get a cheap laugh.”

Sophomore Katie Solodar attended the conference for the first time, taking advantage of many workshops, including dance classes.

“Right now I’m one of the dance captains for the musical, and I’m putting in a bunch of time to choreograph those numbers,” Solodar said. “I’m not really sure what I want to do in the future, but I feel like being a dance teacher would be a fun choice for me because I had so much fun just dancing all day long and learning new combinations.”

Students competing in individual events performed a scene without costumes or props and got feedback from judges. Junior Bella Meera and senior Kennedy Brown decided to perform together.

“It was a really intimate setting because you stand super close to the judges during the performance, and anyone can come in and watch, so it’s kind of weird,” Brown said. “I was feeling pretty good though because Bella and I work really well together.”

Attaining a total of 12 callbacks, Brown also found success with auditions for scholarships for college, including one from Missouri State University, the college she wants to attend.

“That was kind of crazy honestly because I really wasn’t expecting it. I know my friends have auditioned for colleges, and they haven’t really gotten much out of it, so I was just kind of going in not knowing what exactly was gonna happen,” Brown said. “I did my callback with [Missouri State] and that just made me really happy because I was hoping to get a callback from them. When they posted the rest of the callbacks, I just had to start counting my name on all the sheets, and it was just surreal.”

Along with the successes the students were able to celebrate, they stressed their passion and enjoyment of theater, as well as the bonds they had formed amongst each other.

“[Theater] is just a way for people to express themselves. Personally, I like to go out on stage, but it’s nice to see other people that I know who have trouble talking to other people or who don’t have many friends, doing what they love. It just brings a warm feeling to my heart,” Showers said. “I would suggest to anyone who’s interested in doing theater to just do it because we’re very open to other people, and we accept each other with a loving embrace.”