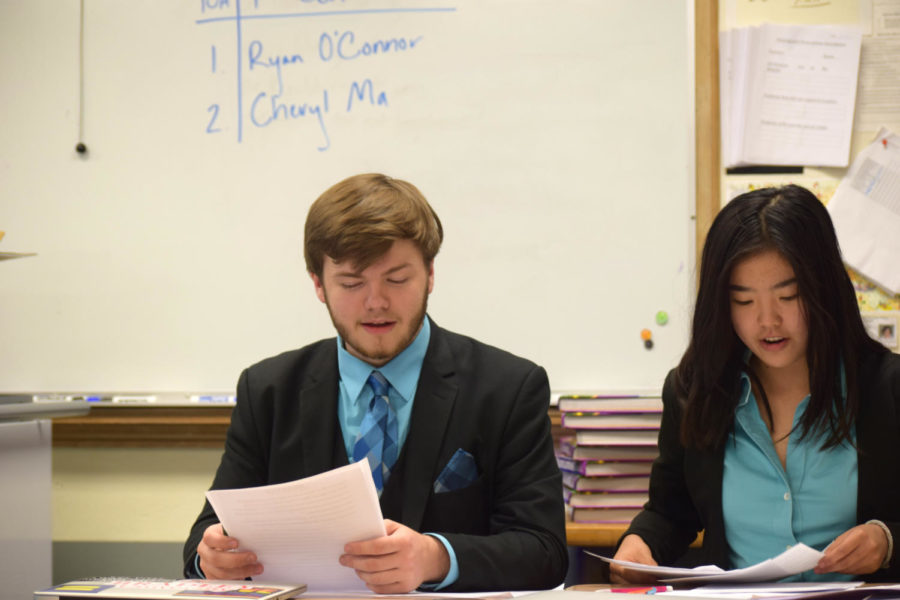 Preparing for a round with his debate partner Cheryl Ma, senior Ryan O’Connor studies information he has researched. Being partners for only one year, they placed first in districts and went to Nationals in the 2016-2017 school year. “Cheryl is the love of my life. She has made it bearable. Working with her has helped me re-find my passion,” O’Connor said.

Over the course of three years, senior Ryan O’Connor has accomplished something that many debate students hope to achieve. He is the first student this year to be a Quad Ruby competitor, which means that he has acquired at least 1,000 debate points. A debate student gets six points for a win, and three for a loss.

“I think the thing that sets me apart from other people is I have a lot of drive. I spend a lot of time working on debate and improving, even if I am already the best,” O’Connor said.

Although this achievement is common for the speech and debate team, it is notable that O’Connor was able to accomplish it this early in the season.

“Usually kids who do this for four years and go to every tournament and are successful will reach 1,000 points,” debate advisor Cara Borgsmiller said. “Ryan didn’t start until his sophomore year. That’s part of the reason that I think this is more of a feat. That in only two years and a couple months he accomplished what usually takes people an entire four years.”

Although Borgsmiller is impressed by O’Connor’s achievement, she is not surprised.

“He’s very driven, not just to beat other people but to beat himself and to do better than he did before. So I think that is a large part of why he finds success in debate. But also, he’s just a naturally charismatic speaker,” Borgsmiller said.

He has also spent on average 15 hours per week with his debate partner, senior Cheryl Ma, in order to improve each other’s skills.

“Both of us are loud talkers, and our train of thought is very similar. Sometimes in a round people will ask a question, and we will answer with the same words at the same time. I’m lucky to have him as a partner that works with me like that, but we are also very different,” Ma said. “We help each other come up with unique ideas in points that the other couldn’t think of. I’m really grateful to have him as a partner because our dynamics work together well.”

O’Connor credits his confidence and public speaking skills to his participation in debate.

“I love that debate allows me to express myself and voice my opinions in a manner that makes an impact,” O’Connor said.

Borgsmiller is grateful to have people who are passionate like Ma and O’Connor on the team.

“For him, it’s never just about giving his speech, it’s about convincing people and persuading them. His passion is something that he showcases every weekend,” Borgsmiller said. “Having a leader like him on the team is invaluable.”