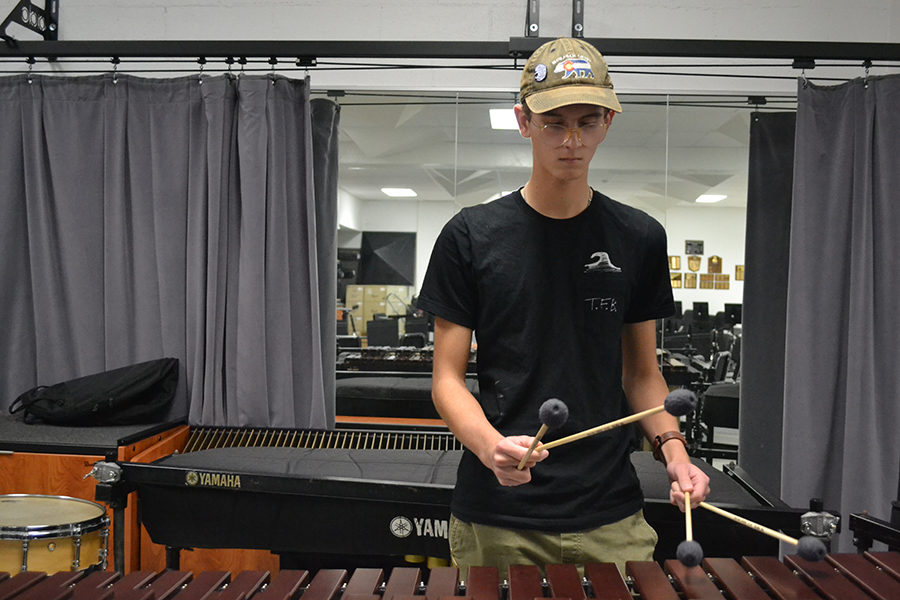 Junior Justin Cupps plays marimba in preparation for the audition. The auditions for All-Suburban concert band were held at Parkway North on Monday, Nov 6. Cupps was one of four students from Parkway West that made it into the band.

After weeks of practicing the same few sets of scales, rudiments and excerpts, four band students, percussionist and junior Justin Cupps, oboist and junior Gwyn Allendorph, tubist and junior John Eyermann and trombonist and sophomore Charlie Foy were accepted into the St. Louis All-Suburban band. After auditions on Nov. 6, students were notified the morning of Nov. 7.

“I was stressed out. They tell all the people to get there a half-hour early, so I got there at 4:20 p.m. My audition was at 5 p.m., but the judge showed up a half-hour late, so I had extra time to psych myself out,” Cupps said.

Auditions were held at Parkway North High school for a variety of winds players, brass performers and percussionists. Cupps was the first percussionist, from West, to make it into the selective groups since the 1990s.

“I’m really honored because this band is super competitive to be in,” Cupps said. “Every person who made it in is truly a phenomenal musician and really deserves their spot.”

The prestige of selection into the All-Suburban band ensembles is furthered by the fact that selection into a district ensemble is a prerequisite to be able to audition for the All-State Ensemble, unlike choir and orchestra.

Once the students are accepted into the All-Suburban concert band, they have the chance to audition for even more selective bands.

“I’m most excited about getting to audition for All-State again. Last year I made the second chair, and since I made All-Suburban this year I get another chance to audition,” Allendorph said. “The music we play there is much harder than the normal music I get to play in the school band and getting to play with these incredible musicians is a really great experience.”

The high stakes of the audition, along with the advanced scales and songs the musicians must perform, create a nerve-wracking environment. Despite the nerves, the students persisted.

“Being nervous is normal. I always tell people it means that you care, so that’s a good thing. People that don’t care aren’t nervous,” Wallace said. “Playing for people is difficult sometimes, so I’m really proud of everyone.”