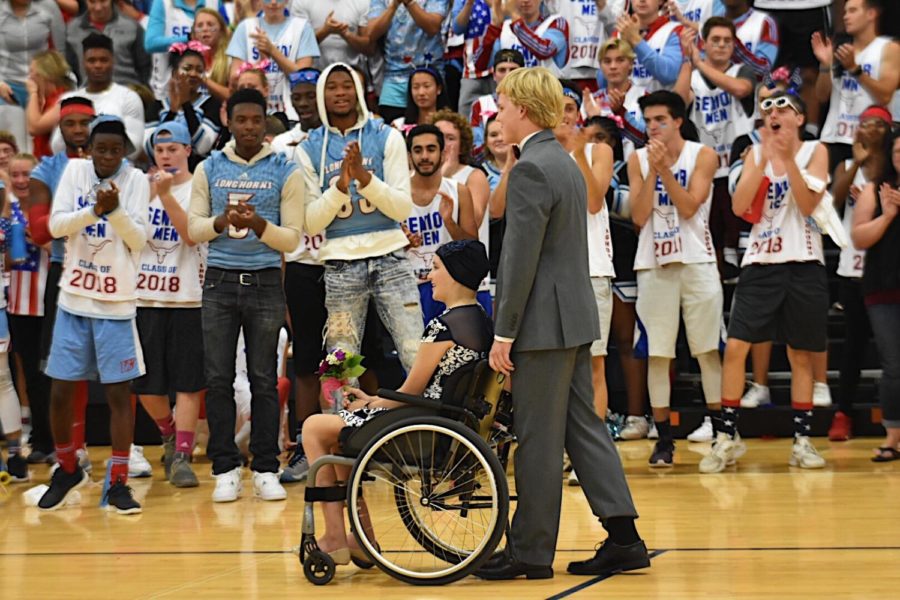 Being escorted by sophomore Walker Piles, sophomore Brynn Haun is given a standing ovation during the coronation ceremony.

The school community continues to support sophomore Brynn Haun in her fight against cancer by electing her to be a homecoming court maid.

“It was really awesome to see her [at homecoming], and it was just good to be all together as friends again,” sophomore and friend Natalie Hitchcock said. “By seeing her walk at the pep rally, I’m not gonna lie, I kind of started bursting into tears because we had just all been through so much and to get to this point has been tough, so it was really nice to see her.”

Just hours after the ballots for homecoming court were sent out, across all forms of social media, students encouraged one another to nominate Haun.

“I thought it was pretty cool because everyone started posting on their stories ‘sophomores go vote for Brynn,’” sophomore and friend Kelly Wehrmeister said. “At first Brynn was like ‘I don’t know if I’m gonna wanna go,’ but then I told her how everyone was coming together, and she thought it was really cool. She was really happy that everyone was there for her.”

Despite not being able to attend school, Haun felt well enough to join her friends in the homecoming activities.

“We knew that this would push Brynn out of her comfort zone a bit, mostly because she does not like to be the center of attention, but she felt it was a way to also thank those who had supported her on her journey,” father Daniel Haun said.

Sophomore Andrew Jolly asked Haun to homecoming with a poster and jar of Jolly Ranchers.

“I couldn’t have asked for a better date and I’m super lucky that I got to go with her,” Jolly said.

Another member of homecoming court was sophomore Walker Piles, who escorted Haun during the pep rally, football game and dance.

“I felt happy that I could help her enjoy high school and how it should be,” Piles said. “She got hit with something that no one can control, and she’s in all of our thoughts and prayers, so it was nice being able to help her.”

During the coronation ceremony, Haun received a standing ovation, as well as during the halftime show at the football game and dance.

“Supporting her was really cool of the school in general,” Piles said. “Giving her a standing ovation and cheering for her the entire time–that’s something you can’t really ask for.”

Haun’s friends and family are grateful for the support offered from the community.

“It is through difficult times like these that we find out the most about ourselves, the good and the bad,” Haun said. “It is also the time that we find out how truly good people are and the amazing things that can happen when a community comes together. We are forever grateful for the Parkway West community!”