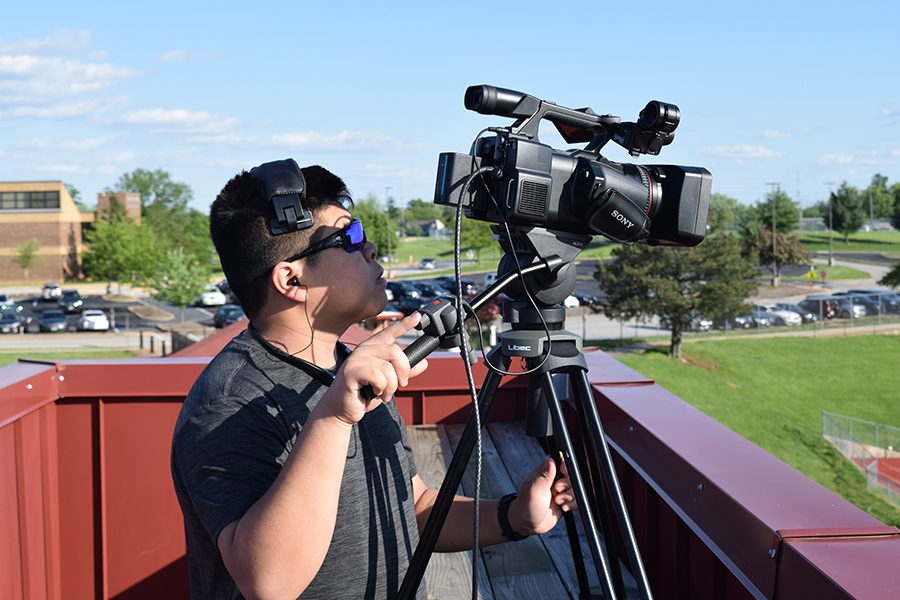 On top of the press box, sophomore Cameron Sato captures one of the camera angles of the game below. Sato worked behind the scenes to broadcast football, lacrosse and soccer games. “It was kind of like a live football game, all our footage switched between multiple cameras on the field or on top of the press box, and was then sent to the board,” Sato said.

With new changes to the school, such as the scoreboard and Adidas sports uniforms, student athletes and the Longhorn Sports Productions (LSP) have mixed opinions.

“I like the look of our Nike [uniforms] better, they had really cool designs, but with Adidas, the jersey itself is nicer and a lot of the warmups we get are really nice and the colors a little off,” varsity soccer player Alyssa Fleming said. “We still look good out there on the field, but the ones for Adidas are just…different. They’re not my favorite.”

However, some students are supportive of the uniform changes.

There has also been controversy surrounding the new scoreboard.

“Honestly we probably could’ve used [the money] somewhere else,” sophomore JV lacrosse player Harper Stewart said. “I think it’s cool when varsity plays and they put up their photos but it’s already got cracks on it and that’s kind of ugly.”

Students in LSP disagree because their jobs are based around the scoreboard.  The jobs include tricaster, showcaster and controlling the cameras that record the games.

“I think it’s really cool. I was a little hesitant at first because I was like, ‘Do we really need this?’ but it definitely provides more opportunities for Longhorn Sports Productions,” junior Emily Foy said. “My favorite job has been tricaster, which is where all the cameras feed to one monitor and you get to choose what is displayed up on the scoreboard.”

“We film live games just like if you were to go to a Cardinals game or a football game of some sort,” sophomore Cameron Sato said. “We run the show in the press boxes, we’re all behind the scenes and we try to run it as if you were going to a professional sports game.”

Some student athletes agree with the LSP and are supportive of the jumbotron.

“[The new scoreboard] is an awesome new edition to [the stadium]. I can’t really remember the old one, but obviously this one’s way better. State of the art,” junior triathlete Jack Swiney said.

The purchase of the $400,000 scoreboard came from the goal of improving the athletic community.

“We wanted to enhance the gameday experience, we want to do that everywhere for our kids and our community to help display those sponsorships,” Activities Director Brian Kessler said. “It’s nice to have them to display and have them for those sponsors who are spending money with the district.”