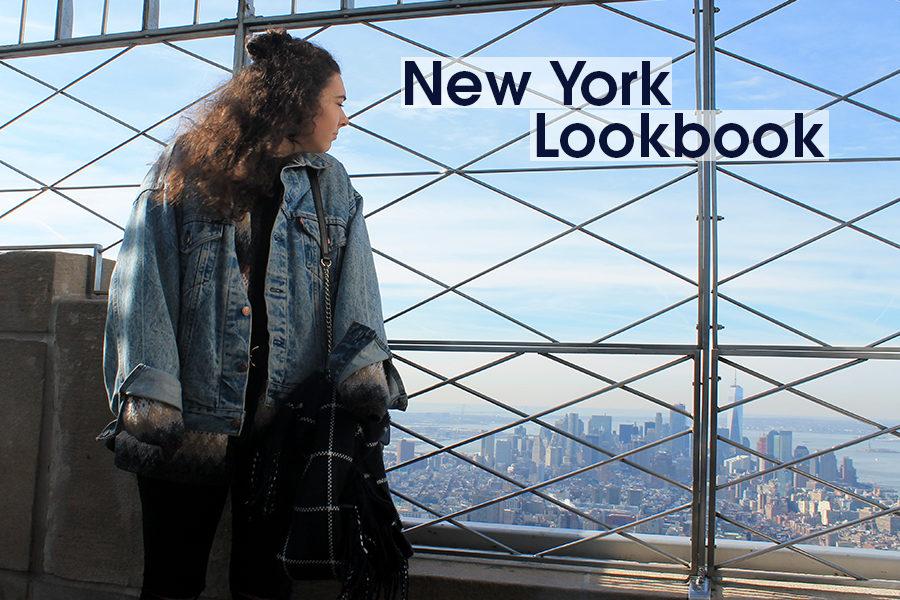 Leigh Ann poses on the top of the Empire State building.

While over 60 members of the senior class travelled to Cancun, Mexico for spring break, Haley Tiepelman and I opted for the bright lights and big city of New York.

What was once a trading post for colonists is now a thriving city full of life and new opportunities. It’s one of the major fashion cities in the world, which is one of the main reasons I’ve been drawn to it—ever since I found out that it was not just a fantasy city run by the stars of chick-flicks.

Though planning the itinerary was pushed back until two weeks before we left, the importance of looking good and blending into the fashionable New York crowds was going to be a no-brainer that we began to plan in late Oct.

I took to Pinterest and created some Google Slides to plan outfits for our trip. While picking outfits to wear in New York I made sure that I chose my jackets, jeans and shoes with the idea of wearing them more than once, to save room in my suitcase for items I would buy while in the city.

Day One: Traveling
Flying into New York’s LaGuardia Airport from St. Louis, I wanted to have an outfit ready for easy traveling and also fun for night walking through Times Square. I wanted to be completely comfortable yet still fashionable since I was flying to New York, after all, so I kept it simple: jeans, button up shirt and my hand-me down jean jacket.
Similar Top: Topshop
Jeans: Topshop
Similar Jacket: Levi’s
Similar Sweater: & Other Stories
Shoes: DSW

Day Two: Shopping -Times Square and 5th Avenue.
On our second day, we stayed around Times Square and 5th Avenue while we shopped in stores like Express, & Other Stories and Topshop. For this, I kept it simple with some casual high waisted blue jeans, a black and white patterned button up, and a leather jacket layered with a warm knit cardigan to keep the cold at bay.
Similar Top: Express
Similar Jeans: Express
Jacket: Express
Shoes: DSW

Day Three: Shopping – Empire State Building & SoHo
As the days got colder, I layered my clothes even more. We went up the Empire State Building and braved the subways, then headed to SoHo to shop. I stayed with a safe outfit consisting of black ripped jeans, a nice black mock knit sweater, and a simple black ankle boots with a cool metallic details. To keep me warm, I kept the big sweater and jean jacket from my traveling outfit.
Similar Top: H&M
Jeans: Topshop
Similar Jacket: Levi’s
Similar Sweater: & Other Stories
Similar Shoes: Forever21

Day Four: Snow Day
Our timing for our New York trip may not have been the best, with the arrival of blizzard Stella, but the whole storm wasn’t as bad as the meteorologists predicted. With seven inches snow on the ground and blowing all around us, we only ventured a block from our hotel, layered with a black sweatshirt that I had gotten a few weeks before the trip, blue jeans and a comfortable pair of Nike running shoes, a sure-fire way to stay warm.
Top: Necessary Clothing
Similar Jeans: Express
Jacket: Topshop
Similar Shoes: Nike

Day Five: Metropolitan Museum of Art & 5th Avenue
On our last full day in New York we went to the Metropolitan Museum of Art and saw Jimmy Fallon’s monologue rehearsal for his show. That evening we went out for a little more shopping on 5th Avenue to celebrate our two hours of standing in line and waiting in the infamous Peacock Lounge while the crew got ready for the rehearsal only to see the 20 minute monologue. The wind was gusty because of the blizzard, so I remained bundled in my wool cardigan and jean jacket, a cool pair of faux leather pants and my favorite cream turtleneck sweater.
Similar Top: H&M
Similar Pants: Express
Similar Jacket: Levi’s
Similar Sweater: & Other Stories
Shoes: DSW

Day Six: Traveling back to STL
While traveling back to St. Louis, I had to account for all the clothes I bought in New York and had to make room for them in my suitcase. I quickly realized that my new Topshop duster coat was not going to fit in the suitcase, so I decided to incorporate it in with my outfit. I kept it simple with my blue jeans, ankle boots and black T-shirt.
Similar Shirt: Express
Similar Jeans:Express
Similar Jacket: Asos
Similar Shoes: Forever21

I had so much fun traveling through this city, and I certainly looked good while doing it. I kept my style simple and that helped me have the time of my life in New York City.