Why students need to go green and respect the community 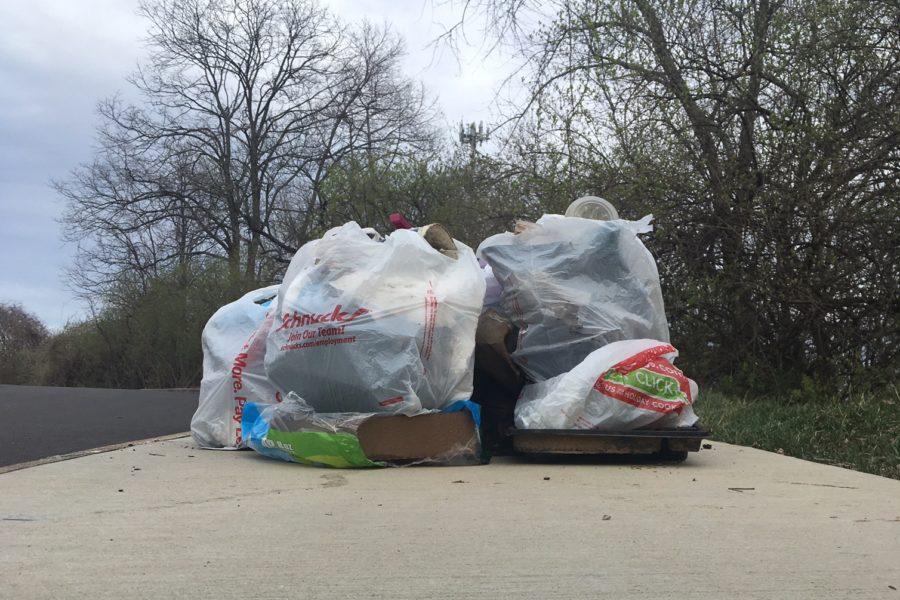 Bags of trash pile up as the road connecting the middle and high school is cleared of litter.

Over the past five years, through both my sister and I’s involvement at West, it’s been fairly obvious to me that our school cares a lot about its community. Whether sports teams are honoring those affected by cancer, classes are raising money for charities or students just show appreciation for our school, we do a lot to benefit others, but in the process, we’ve forgotten the environment in which our community dwells. While our classes offer an endless amount of ways to raise money to donate and help those around us, we still have much we need to improve on.

While walking home recently, a mile-long walk from the school to my house, I noticed that almost 90 percent of the trash I saw was either stuck in the bushes around the school or all over the short distance from the high school to the middle school. I’ve seen this type of thing happening for a long time and the most unfortunate thing about that is that half of the trash is either recyclable or easily replaceable (i.e. water bottles and plastic bags.) My question to that is, why is our school so dedicated to its community but negligent of its own school grounds? However, the good news is, going green is an insanely easy issue to resolve.

One of the largest (but most easily resolved) issues I’ve seen our classes struggling with is the excessive use of paper from both teachers and students. Obviously you can’t expect everyone at a school of more than 1,000 kids to have access to computers at home, but in a school where we have access to at least two computer rooms and over 100 chromebooks, surely not everything needs to be available in a physical-copy. Teachers should focus on taking advantage of the technology we have, because not only is it a greener option, it provides access to resources far beyond what written material could provide.

By printing off 50 page packets for an English project and then asking students to research their projects almost entirely online, the packet just becomes something students have to drag around and risk spilling something on or losing. A way that I’ve seen teachers successfully avoid this though is by creating documents students can edit and submit their own work electronically. What makes this even better is that with today’s revolvement around phones, anyone can see or use anything from their screens, providing on-the-run access to papers or projects, eliminating a majority of paper-usage both in and out of school.

The issue with using all this paper is that more people are okay with just throwing it away after it has been used, leaving it to either rot and emit methane or burn and emit carbon dioxide (both of which are greenhouse gases and major contributors to global-warming.) The effects linked with this includes temperatures in the 70s in someplace like St. Louis, where it should be in the 20s. That may not sound that bad to you, because who doesn’t appreciate nice weather? But with the continuation of emitting greenhouse gases, our summer temperatures could and will rise above our 90-100 degree temperature range, which won’t be good for us or the environment. By wasting such large amounts of paper in and out of school, we are not only hurting our own environment, but the rest of the world’s as well, and West can easily fix this issue by working to eliminate paper-waste in classes.

While paper is one of the best issues for us to tackle, littering is also something we should find important. I don’t know how many times I’ve heard a teacher ask someone to pick something up in a classroom to receive the response: “But it’s not mine!”

Even though the trash came from another student and it should be their responsibility to clean up after themselves, ignoring it is why everywhere we go is covered in litter. But this issue doesn’t just affect people. Birds, rabbits and plants are all affected by the trash filling their homes as they accidentally eat or become entangled in waste. Maybe you don’t care about how nice the trees or parks look when you go for a walk, but you should at least care about the animals who fall victim to human carelessness.

Along with every solution, every call to action, there is always a group of people who believe that they can’t single-handedly save the world, and that’s true. It would be pretty impossible for one person to reverse the current effects of global warming, but in a group, with a number of supporters, or people to back you up, you can accomplish anything. And as cheesy as that sounds, a group of helpers, volunteers or supporters can help you reach whatever your goal is faster than you could have ever hoped, so by supporting this idea and working to cut back on paper and pick up trash, we can make a huge impact on our school.

West has a reputation for doing good deeds for others, but now we need to turn our focus towards our own community. Our school deserves the same amount of respect from its students as they give out, and the best time to start making these changes is now. The simplicity of going-green, or even making tiny changes like paying more attention to trash or cutting down our paper usage, means that we should easily be able to overcome these challenges and start making more positive changes to our environment.