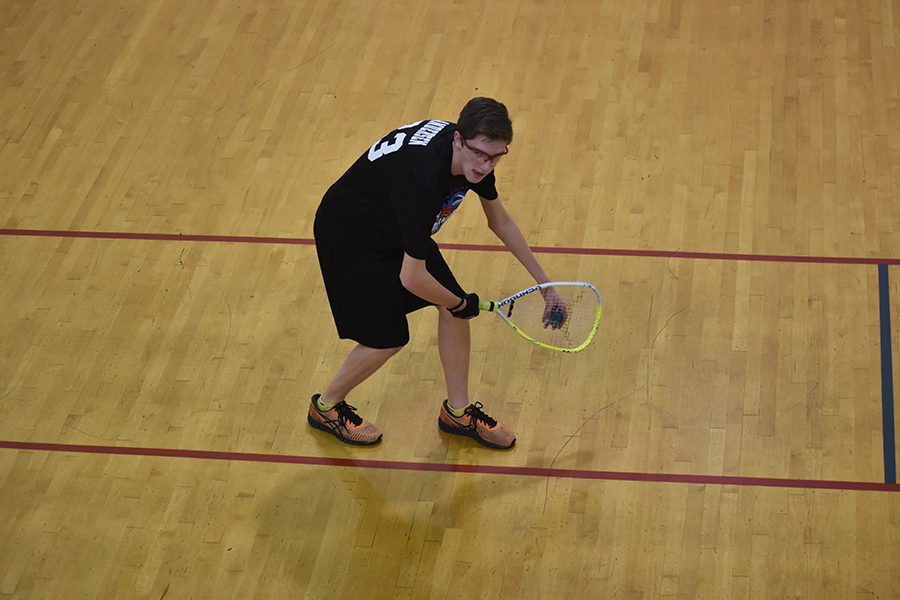 Junior Kyle Andersen crouches in preparation to serve the ball. Andersen has participated in the team for three years.

The boys and girls racquetball team is set to play in the USA High School Racquetball Nationals, after finishing second and first place overall in the state championship respectably.

“All high school teams and players are eligible for nationals. Overall, there will be close to 400 players from 15 different states playing in Nationals this year,” Girls Racquetball coach Tim Duffie said.

The tournament is being held in St. Louis at Vetta Racket Sports Concord on March 3 through 5.

“This year we will have almost 40 players participating in Nationals.  Given Nationals is being held in St. Louis this year, this is about double what we usually have participate,” Duffie said.  “Therefore, more kids will get to have an experience that many junior racquetball players do not get.”

The boys team coach Mike Williams, will receive the 2016 US Olympic Committee and USA Racquetball Developmental Coach of the Year Award at the end of the national tournament.

“As with any sport, our first goal is the players take away life lessons which come from competing individually and as a team overall,” Duffie said.  “From there, given the success we have had all season, our goal would be to recognized as one of the top three high schools in the country.”