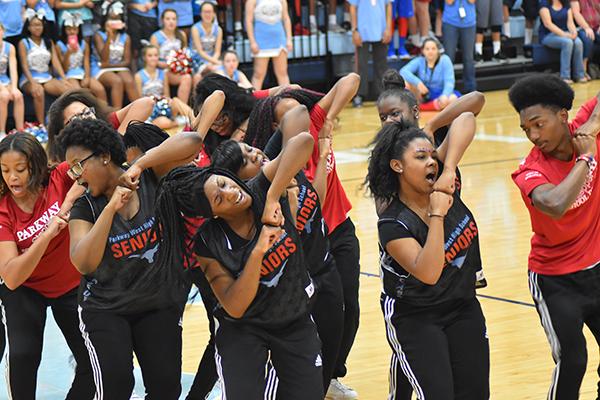 The step team performs at the homecoming pep rally.

After catching the attention of the student body at the Homecoming pep rally, the Parkway District Step Team is practicing and modifying their routine to perform in front of an even bigger crowd at the Sista Strut put on by 100.3 the Beat on Oct. 1.

“This will be my first year performing at the Sista Strut,” senior JeMya Pore said. “I’m not really sure what to expect from it, but I just hope it’s fun and I’m glad to be a part of it. The team performed at it a few years ago and I’ve heard it was a great experience, especially since it is for such a good cause.”

Pore is a captain on the step team. She has been stepping since middle school, but did not join the district team until her sophomore year.

“My friends and I started a team in middle school, but when we got to high school the step team that was here ended because it was all seniors who had graduated,” Pore said. “My sophomore year I started asking about a sponsor to start a new team, but Mrs. Roach told me about the district team, so I decided to join.”

The team started out with just students from Parkway South, but in 2014 it became a district-wide team and now has 10 students from West High.

“I like the fact that it’s a district wide team because I’ve met so many new people. I’d say that is my favorite part of being on the step team,” junior Donielle Coach said.

The step team practices year-round and performs at events such as the Spirit of Excellence ceremony, the homecoming pep rally, Hanna Woods Elementary and at formal competitions.

“We practice three times a week at South. The whole team usually collaborates to come up with the routines. Sometimes we watch videos to get new ideas and add them into our routines,” Pore said.

On April 23, the team got first place in the St. Louis regional championship for co-ed high school step teams.

[quote text_size=”small” author=” —JeMya Pore”] We dedicated our performance to one of our teammates, Fred Lathan. He got a mild concussion while practicing a stunt for that show. It hurt us that he wasn’t there, but I think dedicating our performance to him made us want the win even more. [/quote]

“It was such an adrenaline rush,” senior Marsha Shumate said. “It was probably the biggest crowd we have ever performed in front of.”

“Last year, we asked if we could perform at the pep rally but they couldn’t fit us into the schedule. They made time for us this year. I’m really happy they did, it was a fun experience performing in front of the entire school,” Pore said.

The Sista Strut will kick off at 8 a.m. at Soldiers Memorial with expert speakers, dancing and a special tribute. The walk starts at 10 a.m. and it is expected to have an attendance of over 8,000 people.

“I’m not that nervous to be performing in front of so many people because I feel like our team is prepared,” Coach said. “Even if we do get nervous, we use that energy to step better.”

Anyone can sign up to walk. Just go to 100.3 the Beat and register.

“Some of the girls on the step team are going to walk as well as perform. I love that all of our practice and effort is going towards a good cause,” Pore said.