How you can help produce their CD 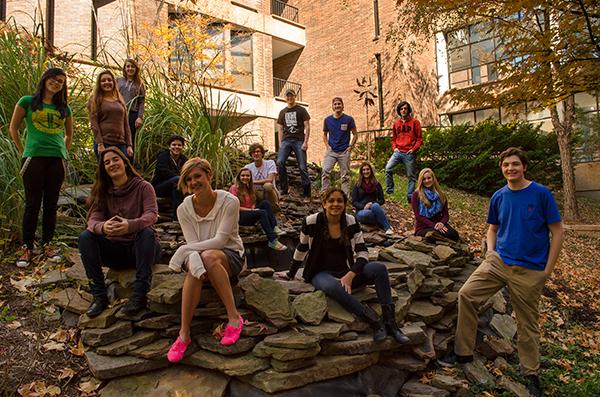 After getting the honor to sing at the Missouri Music Educators Association Conference in January, the Jazz Choir and Jazz Band, Cosmic Latte, now have the opportunity to record CDs and music videos on May 9 and 10 with Broadcast Music, Inc. account executive Tony Marx. The only difficulty is that the class must raise $2,000, which was the price Marx agreed to in order to aid in the recording process.

“Parrish came into class saying, ‘We’re going to record and we can put up some of the money from the Choir fund to make that happen, but to make it good, you guys are gonna have to either do perfect takes, which is not exactly the easiest thing to do in the world, even if you are professional, or the other option is to raise the money,’” junior Jacob Cupps said.

Choir Director Brian Parrish reached out to his friend Tony Marx to see if he could help his students record a CD this school year.

“I decided to explore Tony, from Nashville, who’s really good at doing this sort of thing, come down and do it high quality and professionally, so that we could get some really good recordings,” Parrish said.

They hope to make professional sounding recordings of some of their best songs.

Of those songs, they plan to make music videos for “Muddy Water,” “The More I See You” and “Summertime.”

“I think that as a group, this whole year we’ve been practicing and working together to get the songs that we’re planning to record to be as good as they are. We had to perform them for the first time in January – I believe we started working on them in November right after our fall concert. So, it means a lot to see all of the work that we’ve put into them come to a definite end,” Cupps said.

“I think the GoFundMe page has been really successful,” Todd said. “It’s been so amazing to see all of the support behind us and we are so grateful for it. It’s also been a really great platform for us as performers to share what we’re most passionate about with other people.”

Parrish hopes to make recordings that are better than last year’s, in which senior Megan Todd performed as well.

“The recording process was very eye-opening,” Todd said. “It was a lot of fun but it was also hard work and long hours. It helped us to focus on the details of our songs and allowed us a great experience most high school choirs don’t get. While they were long sessions, it was a great bonding experience for all of us just to have fun and make music.”

However, Todd concedes the recording process had its struggles.

“For the most part it was an extremely rewarding process,” Todd said. “I guess the only con I can think of is that one of our sessions that we recorded was a week after the seniors were out of school, so we didn’t have as much rehearsal time with them and they were a little vocally fatigued, but we all pushed through it.”

Recording last year involved working with producers, but most of them were freelance or amateurs. This year, however, the Jazz Choir looked into making higher quality recordings in hopes of producing professional material.

To donate to the Jazz Choir’s Go-Fund Me, click here.