Debate deemed to dominate at districts 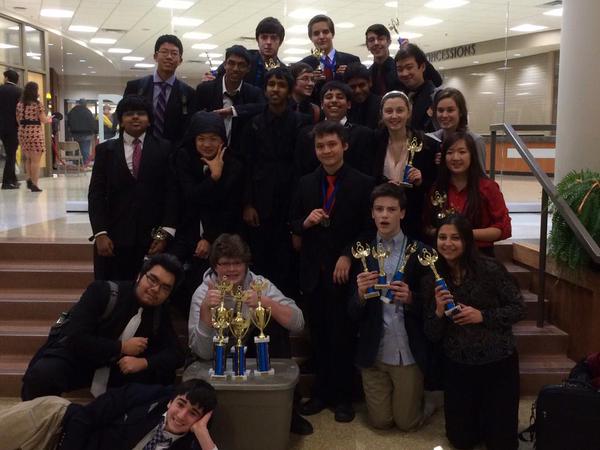 The District competitions for debate are coming up, and debaters are preparing to qualify for nationals, following in the footsteps of those before them.

The National Speech and Debate Association (NSDA) and Missouri State High School Activities Association (MSHSAA) debate district tournaments are coming up on Feb. 27-28 and March 5-6, and debaters are beginning to write their cases, find evidence, get judges and prepare in other ways in order to prepare for the competition.

“To prepare, I’m researching the Districts topic, thinking about debate a lot and trying to improve my speaking by doing speaking drills with my captain,” freshman Shubham Vyas said. “I feel like I’ve finally worked hard enough to go to a higher level.”

Students prepare with a variety of different methods.

“Researching, getting feedback from as many people as possible and putting in the effort are all ways that debaters prepare for districts,” Debate Coach Cara Borgsmiller said. “We also have a judging quota to meet, so kids try to find enough judges to reach that quota.”

The need to prepare and find parent judges is high if students wish to continue the West High Debate legacy, because to be eligible to compete at districts, they must get judges.

“Since I’ve been here, we have never qualified less than five people to nationals,” Borgsmiller said. “Overall in Eastern Missouri, about 40 people qualify to nationals each year, so I would say we qualify a decent percentage of that.”

The team’s success, in Borgsmiller’s opinion, is due to a unique approach to debate, their compatibility.

“I think at Districts, what distinguishes our team from others is that for us it isn’t just about preparing well, but supporting other teammates,” Borgsmiller said.

Junior Nicholas Chiu, who is debating alongside senior Sharoze Amir, is feeling the pressure of debating with a last year debater.

“I think that the seniors, like Amos Chen and [Amir], are facing a lot of pressure to do well,” Chiu said. “But I feel like a lot of our team has a good chance because we’re exceptional, in part thanks to our phenomenal coach.”

For Chiu, the way one approaches the debate mentally plays a part in preparing.

“It’s not all about researching or doing the work, but its about getting into the right mindset,” Chiu said. “It’s telling yourself that you’re going to do well, but accepting any outcome.”

Team support can range from watching each others practice rounds to cheering as loud as possible when awards are handed out.

“While of course the team is capable of being incredibly successful, tangibly, in terms of winning awards, to me the mark of success has far less to do with the trophies that you win but more the lessons you learn from your teammates,” Borgsmiller said. “And I think that this team is probably one of the best in the area at standing by each other, and cheering each other on no matter the outcome.”