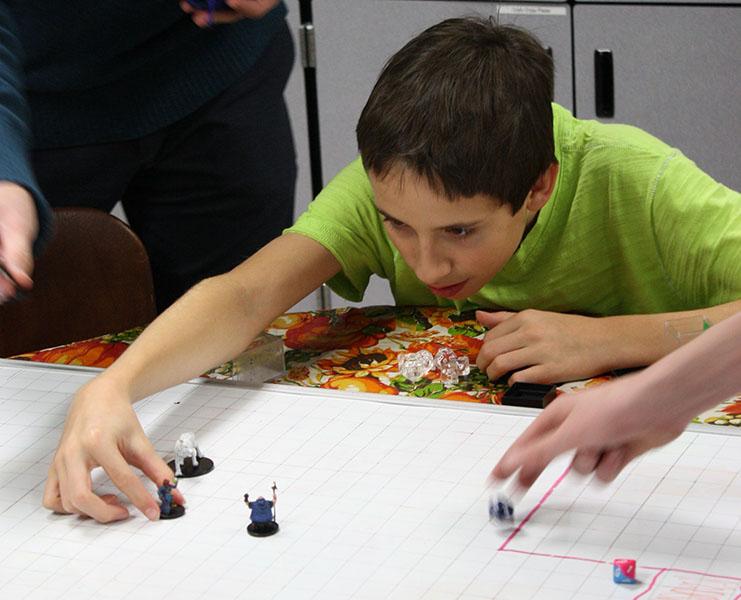 Freshman Jack Burraston in the middle of a move in a session of Dungeons and Dragons. "I like it because I enjoy spending time with the people there, because the people are fun to be around," Burraston said.

One year ago, junior Mayer Mitchell proposed the idea of a Dungeons and Dragons club to Librarian Brian Welch. The club began with seven members, and has since more than tripled its membership.

“Dungeons and Dragons club is a shared storytelling experience between the person who creates the storyline and its players. It helps everyone branch out creatively,” Welch said.

“Ever since I left Thomas Jefferson I wanted to find people to play Dungeon and Dragons with me; it’s a way to relieve stress and relax, it is also fun,” Mitchell said.

The club meets on Monday, Tuesday and Thursday in the library kitchen. Each meeting players continue one of three different story lines, allowing six students to participate per game.

“I started this year, but I had heard a bunch of people talking about it. It is basically an hour and a half of goofing off and being silly. We always get put into weird situations that make us question ourselves,” senior Corey Spurgeon said.

One of the current story lines the club is playing through has the members sailing on a ship towards an unknown island inhabited by dinosaurs and lizardmen.  During the last session, the members had to stave off a coven of Harpies, which are essentially winged humanoids with magical abilities.

“What makes it fun is all the chaos occurring. They had a captain which was a doppelgänger and they had to figure out which captain was real. They ended up making it out alive,” Mitchell said.

The game does not end with a set winner or loser.

“If you end up dying, players can re-role a new character,” Mitchell said.