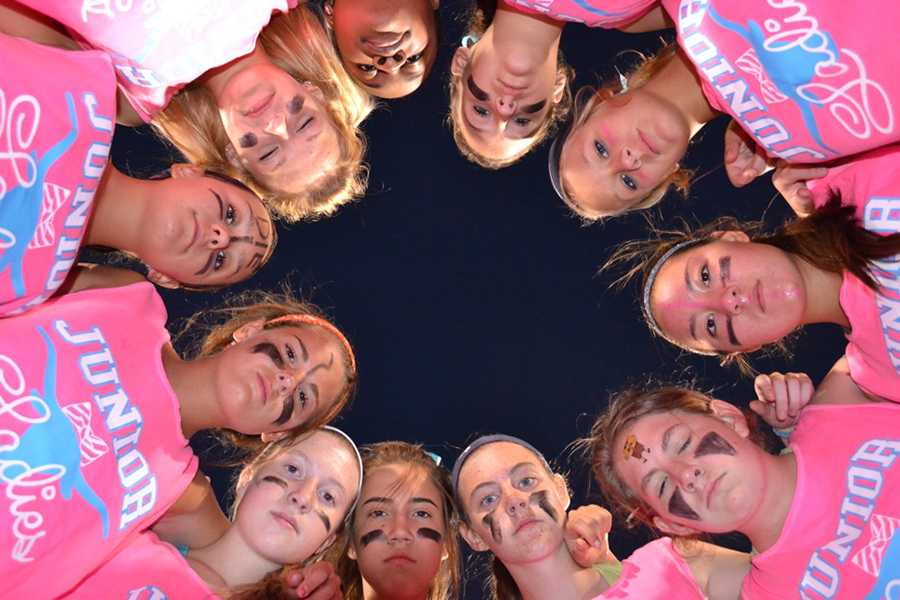 Joining together, seniors Lee McMullin huddles with fellow teammates in the annual Powder Puff game. McMullin scored a touchdown in 2013 juking out the seniors defense and running the ball in for 30 yards. "I'm confident in our team and I know that we will pull through and win this year," McMullin said.

The senior women will take on the junior ladies at 7:30p.m., on Oct. 9, in the annual homecoming Powder Puff game on the stadium field.

To participate players must be a junior or senior girl, have a signed parent consent form, attend two practices and have good sportsmanship. The junior team has 58 players while the senior team has 45.

“I am expecting us to whoop the seniors butts because we have more talent than they do. My job is to be a drill sergeant and keep the team in line, but also to establish play calling and confidence,” junior Evan Shukers said.

The game starts off with coin toss between both teams, to determine who starts offense, and who starts defense. Both teams will place 11 players on the field at one time, with five offensive players at the line of scrimmage. When either team scores a touchdown it will be worth six points.

“Last year we actually almost won, but the officials kept adding extra time because the seniors are supposed to win, so it just ended up being a tie,” senior Hanna Benoski said.

The ladies will play a total of four ten-minute quarters with a consent running clock until the last two minutes of the quarter. They will receive three timeouts per half and a five-minute half time. Admission into the game will be $2.00 and all money will be donated to the Joshua Chamberlain Foundation.