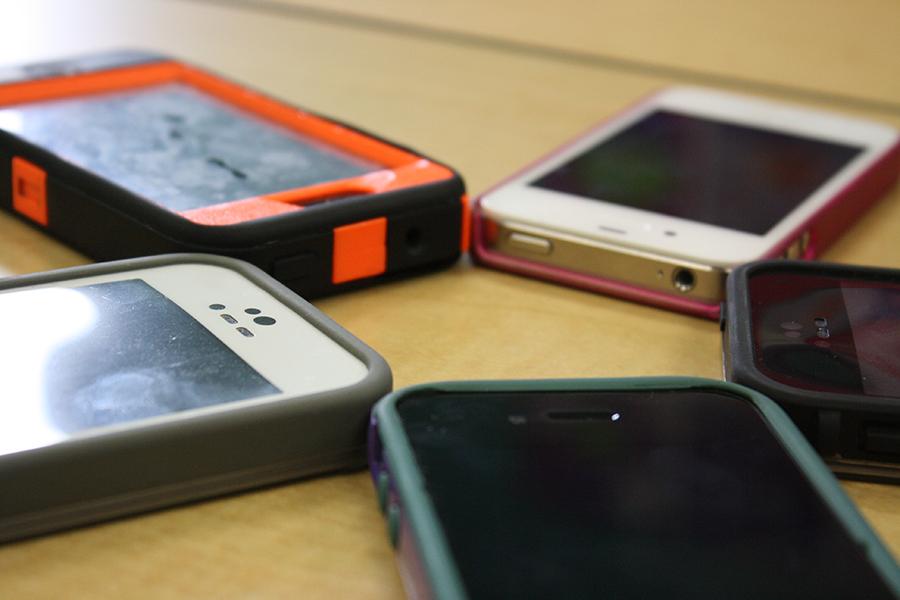 iPhones have evolved over the years to grow in size and shape. The iPhone 6 Plus is the largest phone so far.

After watching Apple’s Press Conference on Sept. 9, people weren’t quite sure what to think of the new iPhone 6, the iWatch or iOS 8.

Rather than releasing only one iPhone, Apple surprised us with the unveiling of the iPhone 6 and iPhone 6 Plus. The iPhone 6 Plus has a longer battery life (with up to 80 hours of life when listening to music), higher quality graphics, and is 0.8 inches larger than the regular iPhone 6. Both of the iPhones have a new scanner on the home button called Touch ID, which scans your fingerprint to open the phone instead of a lock screen.

“iPhone 6 isn’t simply bigger – it’s better in every way,” a representative on the Apple website said. “It’s one continuous form where hardware and software function in perfect unison, creating a new generation of iPhone that’s better by any measure.”

The new mobile operating system,  iOS 8, came out for download for the iPhone 4S or higher on Sept. 17. Users can now do tasks like send audio in iMessage, access more shortcuts, have a keyboard that learns your typing style, use a fitness tracker.

In addition to the new iPhone features, the company also introduced the iWatch, which comes in three different themes including the iWatch, iWatch Sport and iWatch Edition. The iWatch also has the ability to track health stats, send messages to friends, make calls, view mail, listen to music, use Siri and other features that are similar to those that an iPhone can do. It will be in stores at the beginning of 2015.

But critics believe that the introduction to Apple Pay was the most influential release. New phones are now equipped with Apple Pay, which allows the user to pay with their phone rather than a credit card. The phone must be held by a scanner and the user must place a finger on the Touch ID button. A beep sounds to signal the transaction is complete. Twenty-two thousand stores now accept Apple Pay, including McDonald’s, Macy’s, Subway and Petco.

“Every time you hand over your credit or debit card to pay, your card number and identity are visible. With Apple Pay, instead of using your actual credit and debit card numbers when you add your card to Passbook, a unique Device Account Number is assigned, encrypted, and securely stored in the Secure Element, a dedicated chip in iPhone. These numbers are never stored on Apple servers,” a representative on the Apple website said.

Although Apple fans love the the new technology, others don’t believe they would need these new accessories.

“I think it’s a waste of time to make iWatches. You have an iPhone; can’t you just use that?” freshman Charity Gillespie said.

Gillespie, along with the other 35% of customers surveyed, do not want to buy the new iWatch, no matter how much it costs. The cost of an average iWatch hovers around $300, but only 15% of people surveyed would pay the full $300 or more for the watch. One of the iWatch Editions has 18 karat gold and costs roughly $1,200.

“I would want [an iWatch], but I don’t think I’ll buy one. It would break a lot easier than a normal watch. I don’t update my iPhone to iOS 7 or 8. I just kept it before them because I liked the design before iOS 7,” freshman Lauren Calvin said.

Within the first 24 hours of unveiling the products, four million people pre-ordered the iPhone 6 and iPhone 6 Plus. Within the first week of sales, 10 million of the new iPhones were sold. In a survey taken in February, three fifths of iPhone users admitted being “blindly loyal,” meaning they would always upgrade to Apple’s newest release, no matter what they truly think of the phone.

“If you get an iPhone, you tend to stick with iPhones because it’s [an] Apple [product], so [they believe] it’s always better,” senior Gary Stevenson said.

When Apple releases the new iPhone annually, people begin to debate whether the new technology will cause the downfall of Apple.

“I think it is repetition with all their iPhones carrying over to the next one. They have cool features, but I personally do not own an iPhone. I like my phone probably better than an iPhone because I have other Apple products and it’s all kind of the same setup. [If I were to upgrade,] I think I would get a different brand like Samsung,” freshman Lauren Calvin said.

“They are getting worse since Steve Jobs is dead. They don’t have any real guidance,” Stevenson said.

However, the price target on Apple stock continues to rise, jumping from $115 to $130, and customers are still fighting their way into stores for the new products.

It seems as though no matter what people think, Apple continues to manufacture products, and their fans continue to buy their newest technology.