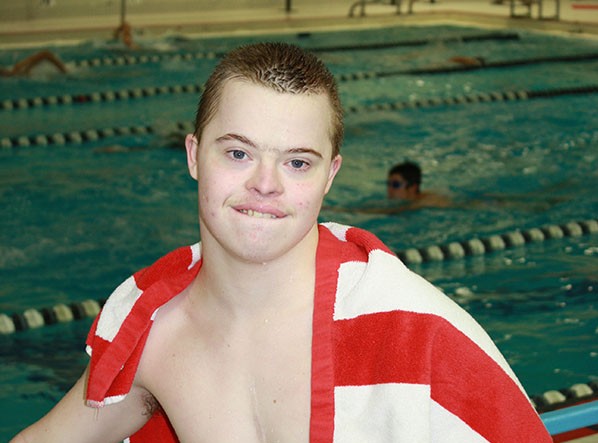 After finishing a work out, Luke Whitten celebrates his success with his mother and Coach Zeller with high fives and hugs.

Standing on the edge of the pool deck, freshman Luke Whitten watched his teammate swim in towards him at Red and Blue Night. As soon as the other boy touched the wall, Whitten jumped into the water. Making his way down the pool, Whitten swam to his own tempo. Despite the fact that his teammates had finished by the time he reached the other end, he just kept going. All around him the audience, lead by his teammates and his family, started chanting his name, clapping, and cheering him on as he finished his 50 freestyle.

“We love having another member on the team. We all care about Luke a lot and look out for him,”  varsity swimmer, senior Noah Bozue said.

Bozue is Whitten’s “older brother;” a Parkway West swim team tradition that gives each underclassman an upperclassman who supports their ‘little brother’ throughout the season.

“Whenever he is not in the water, I try to make sure he is always involved in the team activities. I also make sure that he gets to the pool safely by having him come to my last class for the last five minutes of the school day,” Bozue said.

Despite having a “older brother” who is constantly looking out for him, Whitten enjoys every single one of his teammates.

“They help me with my freestyle kick,” Whitten said.

At practice, Luke works alongside his teammates under the eyes of varsity coach Allison Zeller and JV coach Coleen Sumner.

“Coleen convinced him to join a summer league team this past summer before he came to swim for us. It was his first time swimming,” Zeller said.

Whitten also has a specific way of ending his practices.

“Luke gets to do a 50 of dolphin dives every day after a hard practice,” Zeller said.

Zeller also hopes that Whitten’s passion for swimming will inspire the team and draw them even closer together.

“One of our goals for Luke this year is that he really connects with the team because his presence causes our team bonding to be even stronger and helps teach us compassion as well as reminds us to have a strong passion for what we do. We also plan to work with him on diving,” Zeller said.

“My family loves it. It’s cool that we found something he loves to do and that he’s able to do it with such amazing coaches and other boys,” alumnae Brenda Whitten said.