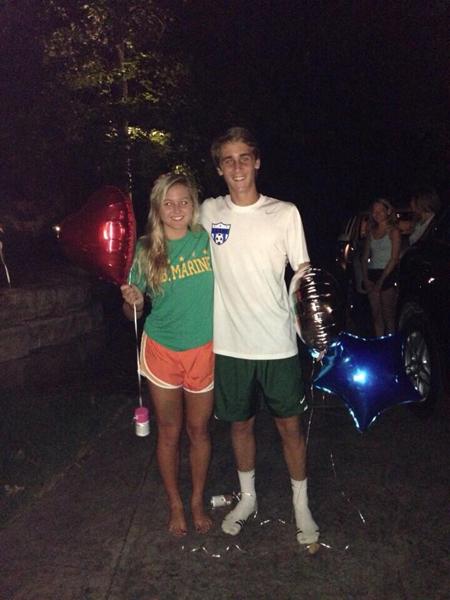 Among the chaos of spirit week, there is a mad search for what to wear on Widescreen Wednesday, finding the perfect suit and tie for the dance, a place to take your date to dinner and transportation.  However, the one unique task a student has is how to creatively ask his or her date.

“I bought a teddy bear from Build a Bear workshop and put a voice recorder in it that said ‘Will you go to Homecoming with me?’” Pergo said.

“I wanted to go with him because he knows so many people in our grade since he used to go here,” Galkowski said. “When I asked him I knocked on his basement window.  His older brother thought that we were third graders so no one came out at first.  When he finally came outside I had balloons and just kind of asked him.”

“From the field, I tossed a football into the stands where she was sitting that said, ‘Homecoming?'” Sisk said.

Quoss’ friends helped Sisk make sure she was in the right place at the right time.

“I just laughed when he asked me. He placed a monkey on my desk with a sign that said ‘homecoming’ before I got there. I knew he was going to ask me, but I just didn’t know when, it was a fun surprise,” Rayfield said.