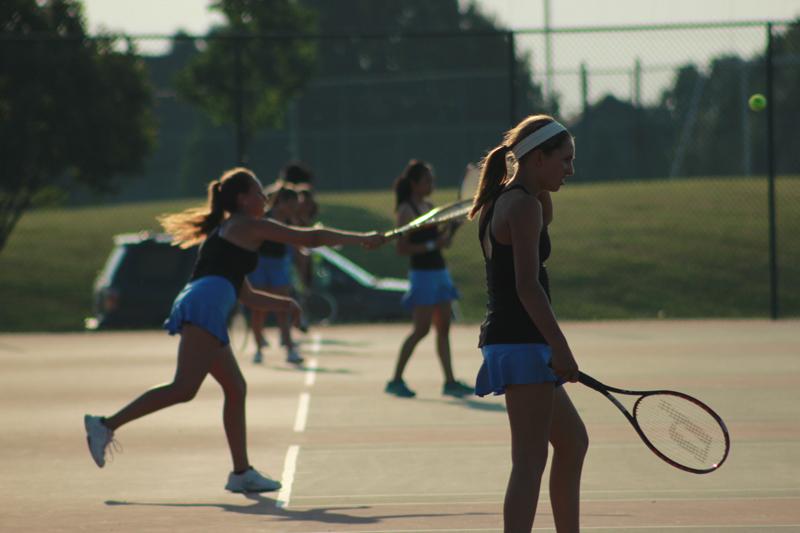 The girls tennis team takes the courts Fri. Aug. 23 at Red and Blue Night. The team had been practicing for two weeks prior to the event. "I am really looking forward to team bonding this year," Quoss said.

The girls’ tennis is starting the season with only two returning varsity players,  leaving multiple spots open for new talent.

“I have high expectations for the upcoming season. I plan to win at least 70% of our matches and develop all the new freshmen we have,” coach Jason Townsend said, “I just hope that the girls will give the same level of effort, and put as much into it as I do.”

Junior Stephanie Quoss is on her fourth year playing tennis and is one of the two returning varsity players along with senior Maddy Chaney. Both girls practiced during the summer to prepare for the season.

“When I am playing with a partner I expect them to have good sportsmanship and just to be there to back me up if I need it,” Quoss said.

Freshman Claire Martin prepared for tryouts all summer by playing every day, doing clinics at Woodsmill Racket Club. Claire has been playing tennis since she was eight. She is currently placed at the number one spot for Varsity.

“I think I am most excited to play different schools and have fun with the team. I expect my teammates to try hard but have fun doing it,” Martin said.

Townsend believes that the teams’ hardest competition will be Lafayette and Clayton.

“Before we play out first match we need to gain more focus in practice and formalize the line up for more consistency,” Townsend said.

The Varsity team won their first tournament against Cape Gerudua and Jacksonville, Missouri.