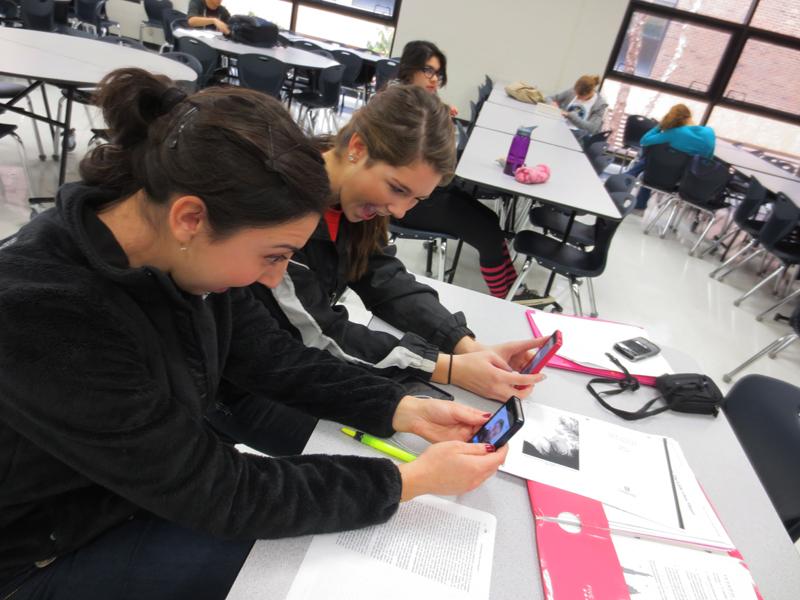 Instead of texting, senior Alexa Emerson and sophomore Kaitlyn Lawler Snapchat their friends during study hall. "I like that I can show my friends what I am thinking through facial expression," Lawler said.

Texting has a new competitor, Snapchat. Over 50 million snaps are sent out a day. Snapchat is an app used to share pictures and videos with captions for up to ten seconds. After those ten seconds are up, your picture is gone forever, and if you screenshot someone’s Snapchat then they receive a notification saying you did.

“I think it’s a bad idea to get a notification because if I screenshot someone’s picture I don’t want them to know,” freshman Tamara McCarthy.

You can send a Snapchat anywhere, anytime and any place. When you receive a snapchat you get a notification sent to your phone.

“When I get caught sending a Snapchat I just laugh because people are always like what are you doing?” junior Jason Erwin said.

When people send Snapchats they tend to make them as funny as possible. People go to great extremes to make theirs the funniest.

“The funniest one I got was of Joanne Yu pretending to be a chipmunk on her floor,” junior Ezgi Ilhan said.

Although there are still people out there that don’t use it.

“I think it’s a waste of time, I don’t feel comfortable with it because I am not used to it and I don’t normally express myself through pictures,” freshman Matt Pilgrim said.

Snapchat continues to gain users as it enters its second year. Freshman Alex Karrenbrock has used Snapchat for a couple of months now. He Snapchats to about two or three people per day.

“The funniest Snapchats to send are elbow butts,” Karrenbrock said.