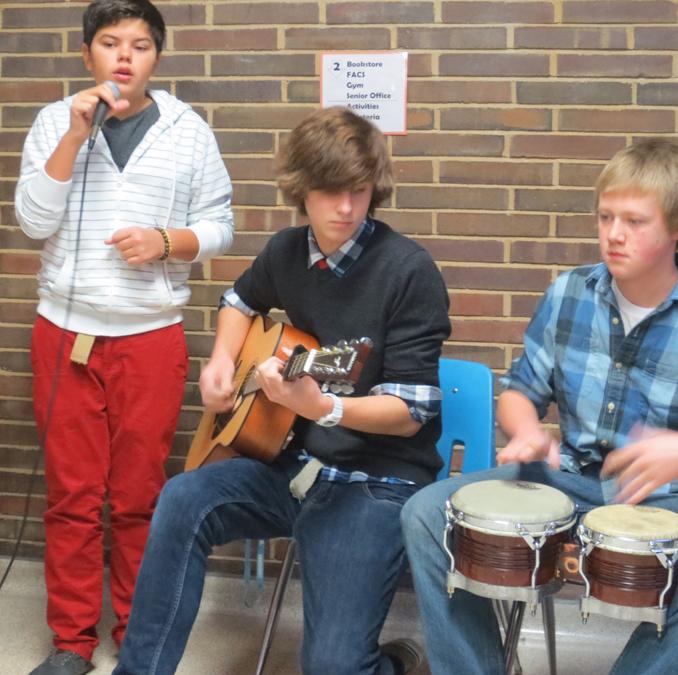 The morning of Friday, Dec. 14, the Fallen Kings play for a crowd at the top of the main stair well. The guitarist of the band, freshman Jacob Cupps played the song "I’m Yours," by Jason Mraz. “It’s a nice song and fairly easy. A lot of people know it, so it works out really well,” Cupps said.

Friday morning before school, the band members of Fallen Kings, freshman Jacob Cupps, Alex Hubbard and Josh Massara perform for students throughout the halls. The band formed at the beginning of the school year when choir teacher Brian Parrish handed out an interest survey.

“This opportunity isn’t exclusive to anyone. Anybody can participate,” Parrish said.

The initial idea began when Massara expressed interested to Parrish about starting a band.

“All of my friends are good at music, and we needed to play in front of people,” Massara said.

The band meets Friday at 6:30 a.m. to practice with Parrish. They started out performing jazz songs and now perform more modern rock songs.

“They have improved a lot. They have gotten used to playing together and each individual has improved on his instrument,” Parrish said. “All of them have really good ears, so they learn music fast. They all have a real passion for performing.”

Hubbard, the singer in the band has been performing unofficially since the age of five. He achieved a score of one at the Solo Ensemble, which is the best a student can earn.

“I want to do something with charity in the future and hopefully record a CD,” Hubbard said.

Hubbard not only performs Friday mornings, but he also performs at parties with his friends.

Cupps, the guitarist, has been playing for about five years. He would eventually like to add a keys player to the band as well as a female vocalist and someone to run sound.

“I’m proud of the fact that we just get to play for everyone, it tends to go really well,” Cupps said.